Part 1: How to burn ISO to Blu-ray with Leawo Blu-ray Creator

As an ISO to Blu-ray burner software program, Leawo Blu-ray Creator can not only burn ISO image file to Blu-ray disc directly, but also burn videos such as MKV, MP4, AVI and so on to Blu-ray disc, folder and ISO image file. Besides, Leawo Blu-ray Creator can be used as a Blu-ray photo slideshow burner to burn photos to Blu-ray content. Moreover, Leawo offers 40+ preset disc menu templates in 8 different categories and in addition to the preset disc menu templates, users can also design disc menu to make their own disc menu and save it as a custom template for future use. Last but not least, this program offers users with abundant video editing features like trimming or cropping videos, adding effects and watermark to videos, removing noise from the source movies and making 3D movie. 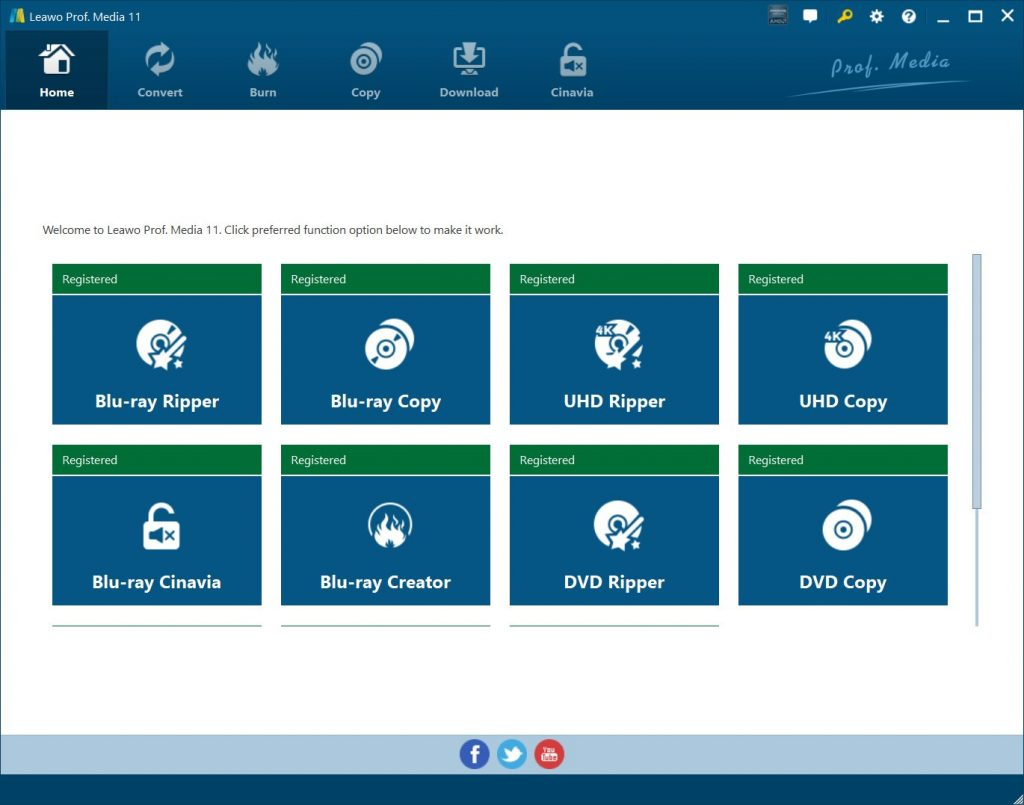 In order to import ISO file, you should click the “Add Video” drop-down menu on the interface of Leawo Blu-ray Creator and then click “Add iso file”. In addition, you are allowed to directly drag the ISO file into it. 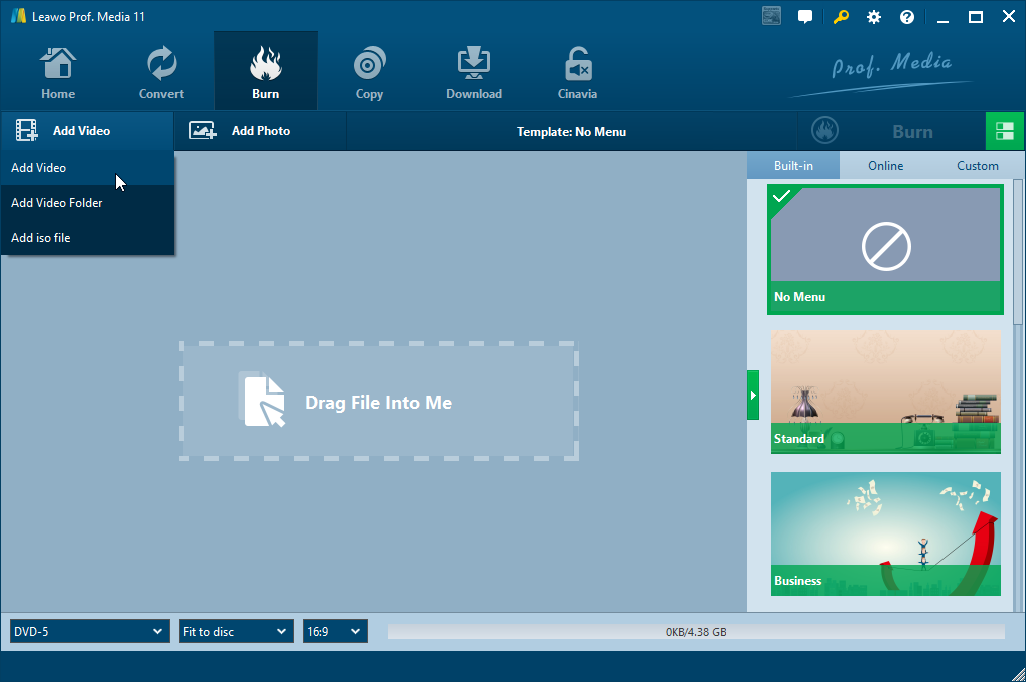 Part 2: How to burn ISO to Blu-ray with Leawo Blu-ray Copy

Just jump back to the main interface of Leawo Prof. Media and you can click the “Copy” tab or click the “Blu-ray Copy” button to run Leawo Blu-ray Copy.

In order to import the ISO file, you should click the “Add UHD/Blu-ray/DVD” button and then click “Add iso file” on the interface of Leawo Blu-ray Copy or directly drag the ISO file to the interface. 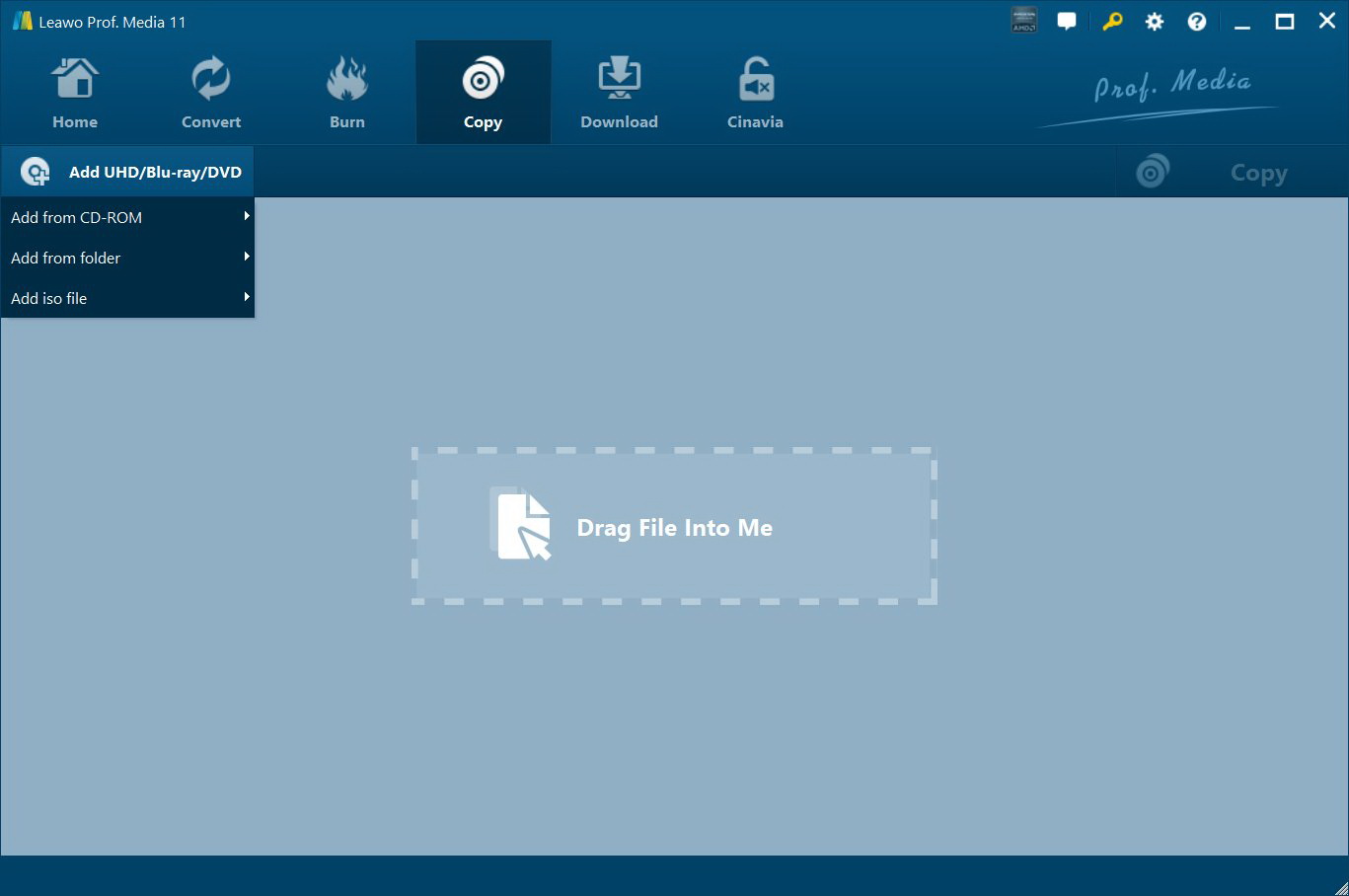 (2) After importing the ISO file into Leawo Blu-ray Copy, video, audio track, and subtitle information of the ISO file will be displayed. We need to choose subtitle and audio track and set the output format as BD25 or BD50 from the drop-down menu at the lower-left corner. 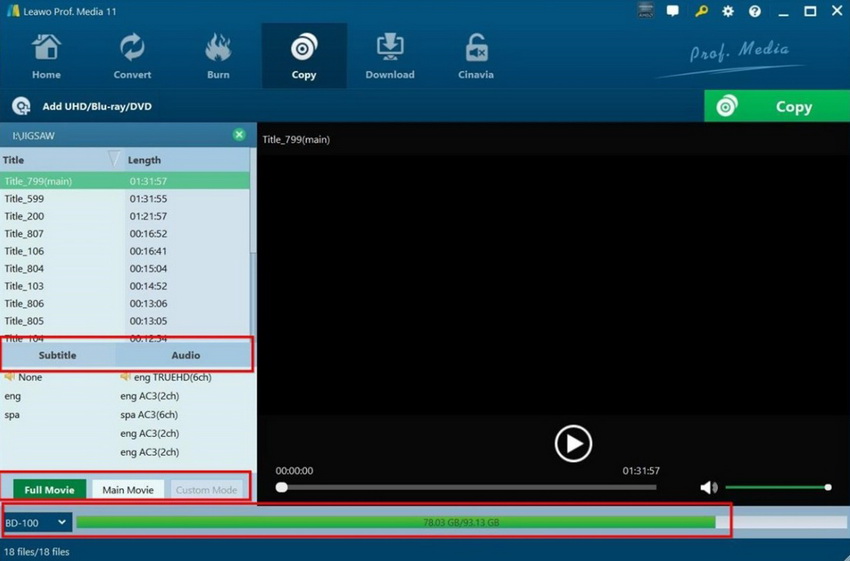 Click the green Copy button on the upper right corner and there are some settings that users need to select or fill out. Under the "Copy to" options, you are able to tick Folder to copy a Blu-ray video folder or tick the third option after inserting a blank writable disc into the CD-ROM. You are also allowed to rename disc label and set output path. Finally, click the “Copy” button to start copying ISO file to Blu-ray content. 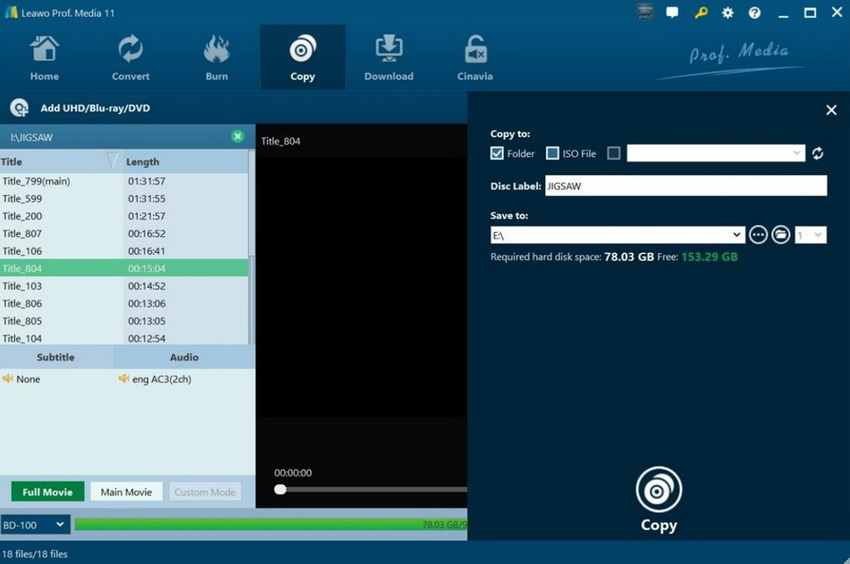 As a CD/DVD/Blu-ray disc-burning app, BurnAware is very simple and easy to use. You can use it to create data backups, audio CDs and to create or burn ISO image files. The free version also lets you create bootable discs, which is really handy. Another really handy feature of the free version is the ability to burn across multiple CDs, DVDs or Blu-ray discs. ImgBurn has been one of the favorite CD/DVD burning apps for a long time and now it also supports Blu-ray discs, which makes it even better. It has a bunch of other features that make it popular, including supporting the latest drives, the ability to batch create images, support for a wide range of image file formats, and lots more. The other unique feature of ImgBurn is that it can be used to create playable DVD and Blu-ray discs from VIDEO_TS and BDAV/BDMV folders, respectively. StarBurn is a nice CD/DVD/Blu-ray burning tools that allows users to grab, burn and master CD, DVD, Blu-ray, and HD-DVD media files. You can burn audio, video and data following the separate burning options. ISO image files creating and burning are also available. Besides, this free Blu-ray burning software has the ability to erase a disc and compress audio. True Burner is developed by Martin Koehler ready for creating DVDs and CDs from data, audios, images and videos stored on your Mac. It does not support importing files from devices and iTunes directly. I like its straight-forward interface which makes everything easy even to newbie. It is not a powerful DVD burning tool but is advisable if you are looking for a simple program to only save your files to a DVD and release your hard drive. Developed by Nero AG, Nero Burning ROM is an optical disc authoring program and designed to rip audio CDs, copy CDs, DVDs as well as Blu-ray discs, and burn CD/DVD/Blu-ray. It's quite easy to burn ISO with Nero, requiring only a few steps. Besides, people can now also have original album art on MP3 CDs and MP3 DVDs for their new car radio thanks to Gracenote® technology. 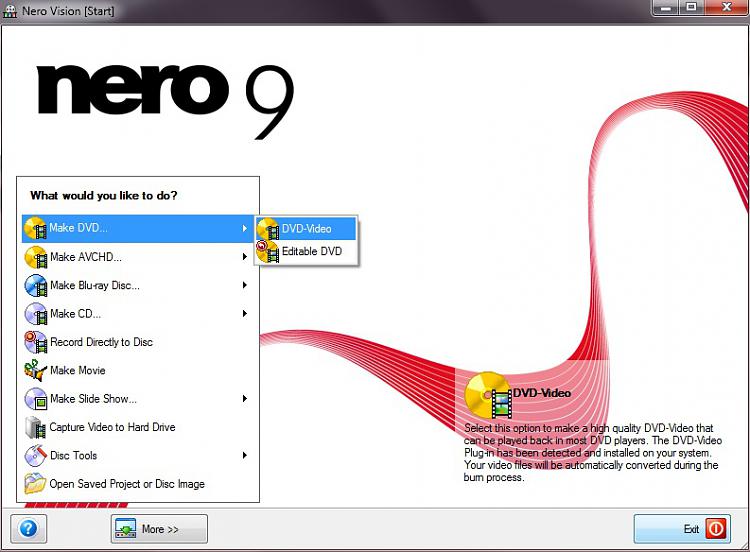 Featuring a simple interface, Active ISO Burner allows users to burn an ISO image file to CD-R, DVD-R, DVD+R, CD-RW, DVD-RW,DL DVD+RW, HD DVD and Blu-ray Discs. Aside from the said, this program can be executed from the command line. 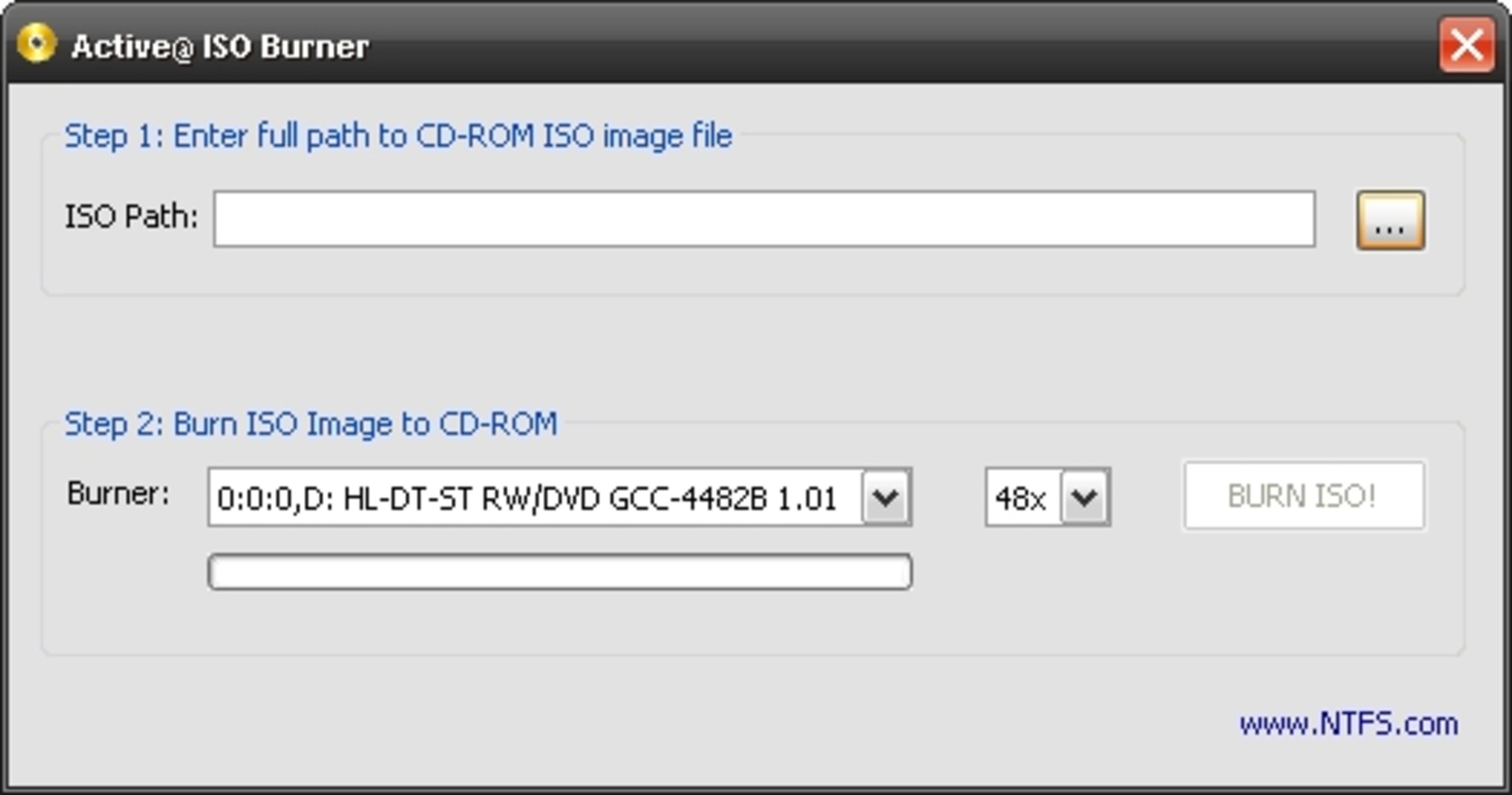 After you successfully burn ISO file to Blu-ray content on your computer, you probably need to use a powerful program to play Blu-ray movies on your computer. Therefore, by the way, I would like to recommend Leawo Blu-ray Player for you.

Here are the steps on how to play Blu-ray content with Leawo Blu-ray Player.

Step 1: Download Leawo Blu-ray Player from the web and install it on your computer, then run it.

Step 2: You have two easy ways to load a Blu-ray movie into Leawo Blu-ray Player:

(1) Click on the "Open File" button to find the Blu-ray movie you want to play and load it into Leawo Blu-ray Player. Step 3: Now, get your snacks and start enjoying your Blu-ray movie.