What makes MakeMKV so popular as a Blu-ray ripper is probably that it can rip Blu-ray disc with high quality and it's free, well, at least for the first month. If you've used MakeMKV before, you should know that if you use it to rip Blu-ray, you will only have one month to rip Blu-ray for free. And later it will set you back $50 to keep using it to rip your Blu-ray collection. The quality of the output video that MakeMKV produces is extremely good, but there are a few drawbacks about the program that might be a deal breaker.

Things you should know about MakeMKV

Here are a few things you should know about MakeMKV.

If you can accept the abovementioned drawbacks, then MakeMKV is a great choice for ripping Blu-ray. If you don't want to keep using MakeMKV when the time's up, you can always look around and try finding yourself a nice little MakeMKV alternative. Unlike on macOS, you got plenty of excellent Blu-ray rippers you can use as a MakeMKV alternative. The one I'm recommending to you is called Leawo Blu-ray Ripper, it's one of the best MakeMKV alternative Windows users can find. Check out more information about this program and how to use it in the content below.

As an efficient DVD converter to copy DVD and Blu-ray to digital video formats, such as MKV, MP4, AVI and more with lossless quality, Pavtube ByteCopy is more competitive than people anticipated. One of its remarkable features is that you can use it to trim, crop, merge, insert subtitles, export srt/ass/ssa subtitles, add video effects in the target movie. With quite simple and compact interface, you will find the alternative to MakeMKV powerful and professional. However, you have to pay for the full version if you want to get more function accessible. Freeamake Video converter is an excellent MakeMKV alternative windows users could try. It is able to combine video conversion, DVD burning and DVD ripping tool into one piece of software. And it also allows you to adjust video and audio size, codec, bitrate, frame rate, sample rate and channel. To remove watermark and black bar on the videos, and to copy Blu-ray or DVD at a higher speed or to various video/audio formats, you are supposed to pay for its King Level. Format Factory is a kind of multifunctional converter which could help you convert all types of video, audio and image files to almost any file format. Despite of offering a multitude of choices for the output format, this wonderful alternative to MakeMKV also lets you adjust the encoding quality of your files between low, medium and high. Besides, it supports up to 62 languages, and you can customize its interface with 4 different skins. Leawo Blu-ray Ripper is one of the best Blu-ray rippers out there. Its leading Blu-ray disc decrypting technology allows it to rip discs from all over the world. No matter where you get the disc or what copy protections are applied on the disc, it can rip the disc with no problem. Unlike MakeMKV, you will get a compressed output video but the quality would be just as good. The program's packed into a software suite called Prof.Media now. So if you need, you can also purchase other modules inside the suite to help you better process your media files. TDMore Blu-ray Converter is a program allowing you to rip videos from Blu-ray discs and convert them to a variety of formats, which is easy to use. Whether you are looking to move your files to a PS3, an iPhone, a Kindle, or even a Palm TX, the MakeMKV alternative windows should have all the options that you need. Moreover, to help you get an overview of the movie contained on the disc, this MakeMKV alternative will display a preview image taken from the clip and complete title. By using an alternative to MakeMKV, you can easily convert your Blu-ray collects into a more common video format for playback on more devices. Here's how you can rip Blu-ray with one of the MakeMKV alternatives we recommend. We'll be using Leawo Blu-ray Ripper as an example to show you how to do that. You can directly download the program by clicking the Download button provided below.

Step 2. Enter the Blu-ray disc you want to rip to your optical drive. Make sure that your drive supports reading and playing Blu-ray discs. And then find the Add Blu-ray/DVD button on the top row of buttons and click on it to load the content of the disc. You can also open the disc folder in File Explorer and drag the Blu-ray disc content to the blank area of the interface.

Step 3. After choosing the disc, you will open a page with 3 options for you to choose which part of the disc content you want to import to the program and rip. The 3 options include: Full Movie, Main Movie and Custom Mode. If you want to rip all the content in the disc, go with Full Movie. If you only need the movie and want to get rid of all other parts, choose Main Movie. If neither of the above two options fit, choose Custom Mode and manually choose which parts you want to rip.

Step 4. The files will be loaded and added to the video file list. Next is to set the output format for the video. Next to the Add Photo button on top of the video list is a Format button that shows the format that's being set as the current output format. Click on that button and a menu will emerge below the button. Click the Change button on that menu and you will open the Format choosing panel. All the supported output format and presets for different handsets can be found here. Choose the format you need and click on it. You can choose Multi-track MKV from Format>lossless video to convert your Blu-ray movie to a lossless MKV video or go for MP4 to convert Blu-ray to MP4 which is playable on most mobile devices. 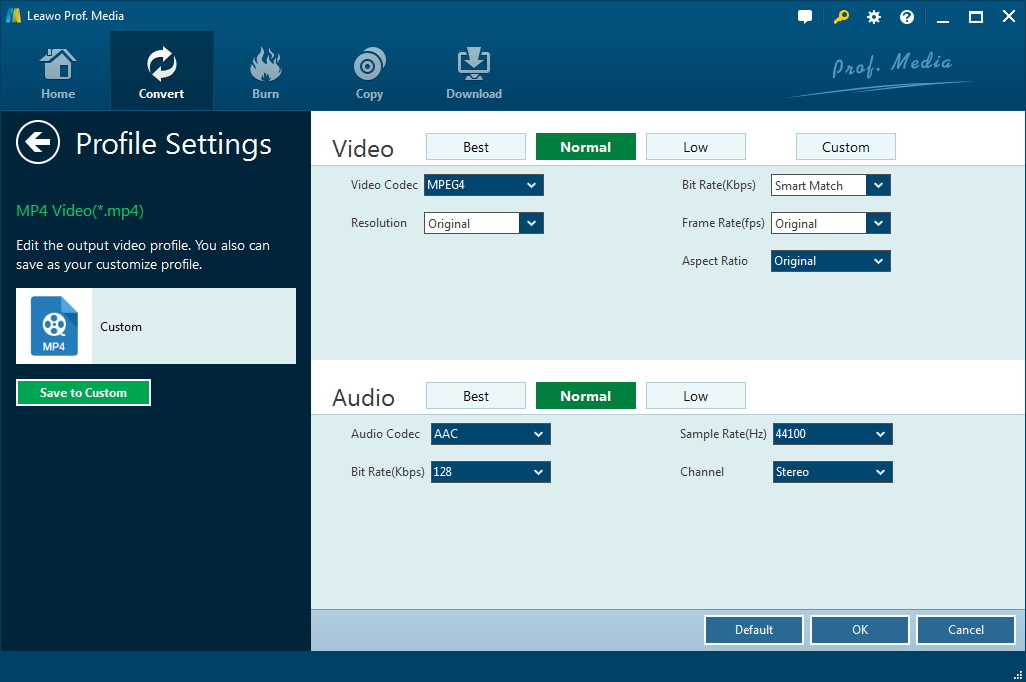 The output MKV video file is very large in size, for MakeMKV doesn't offer you many options to adjust the output resolution, such as bit rate, frame rate... For example, the ripped MKV files are only about 10% smaller than the original DVD files. Sometimes, the size of the output MKV file is over than 6GB. However, Leawo Blu-ray ripper enables you to adjust video codec, bit rate, aspect ratio, resolution, quality, audio codec, sample rate and other parameters and retains all original image quality.

The output video format of MakeMKV is limited to MKV, which is a bit frustrating for those who want to play the DVD movie video on iPhone or other mobiles on the move. You have to play MKV on computer with some professional MKV player. Instead, with Leawo Blu-ray ripper, there are various video/audio formats and device models available for selection, like 4K MP4, 4K MKV, HD MP4, HD AVI, MOV, iPhone 6s, iPad Air, etc.

On one hand, for a normal film, it takes at least half an hour to complete the process of converting, which is really time-wasting. On the other hand, Leawo Blu-ray ripper supports NVIDIA CUDA, AMD APP and Intel Quick Sync GPU accelerating technologies, which makes it 6X faster in converting.

Take all the limitations into consideration, we find Leawo Blu-ray ripper is more powerful. In all, if you are just backing-up disks in case of damage, or transferring them for viewing on the move, Leawo Blu-ray Ripper is the best MakeMKV alternative on hand with a simple and attractive interface that offers you all of the function with none of the headaches.