How to Record A Radio Show on Computer Many of us like listening to radio shows. Radio programs contain various kinds of contents like trending news, music shows, sports, talk shows among others. Most of huge time, people listen to radio shows while they are driving cars, taking a walking or even cooking in the kitchen. Even though mobile apps, internet media, and Television shows are most common these days, radio shows enrich lives and they offer a great amount of information. For this reason, radio shows still remain popular these days and that is unlikely to change for the foreseeable future. In fact, statistical data from Wikipedia shows that Radio listenership grew by more than a quarter of a million between 2005 and 2017, and that 68% of households have at least one radio in the United States. More people have also been starting their own radio shows. Below is a list of the top twenty popular radio shows in 2020 that you can try to listen to, which includes the Nick Cannon Radio Show, and the Fibber McGee and Molly Radio Show.

Part 2: How to Record A Radio Show with Audacity

Firstly, we are going to use the radio recording tool, Audacity, to record radio shows. If you are looking for a tool which is able to record and edit audio free and efficient, Audacity is a great choice. Audacity is an open-source recording and editing software capable of capturing high quality audios without spending a single dime. It can record live radio streams, playing MP3s and audios from external sources with a single click. Moreover, it is equipped with sound effects and editor for you to personalize your music. In this guide, we are going to show you how to record radio shows with the audio recording and editing software. Just like any other radio recorders, using Audacity to capture live streams is easy.

1. Download and install the software on PC, and open up your chosen broadcasting software and select the source as your microphone or system audio.

2. You can click red round button to start recording, and you can hit yellow squared button to terminate it. Conversely, beginners will find it hard to manipulate grabbed audios due to Audacity’s too technical editing functions. Part 3: How to Record A Radio Show with Leawo Music Recorder

However, how to use Audacity is a little complicated for many users. Here we are going to recommend a easier-to-use radio recorder for users. Leawo Music Recorder is the professional audio recorder that helps you record audio of any source it could capture and save to MP3 or WAV format. It could record audio and music from computer audio and online music sources like YouTube, AOL Music, Last.fm, etc. What’s more, professional online audio recorder can also add music tags like artist, album, album artwork, song name, and son on to recordings. Just launch the software and click the "Record" button before playing audio, and it will automatically record the audio you are playing. Users can pause or resume capturing process anytime. The following guide will show you how to record a radio show on computer with the professional radio and audio recorder. And you can free download it to have a try. 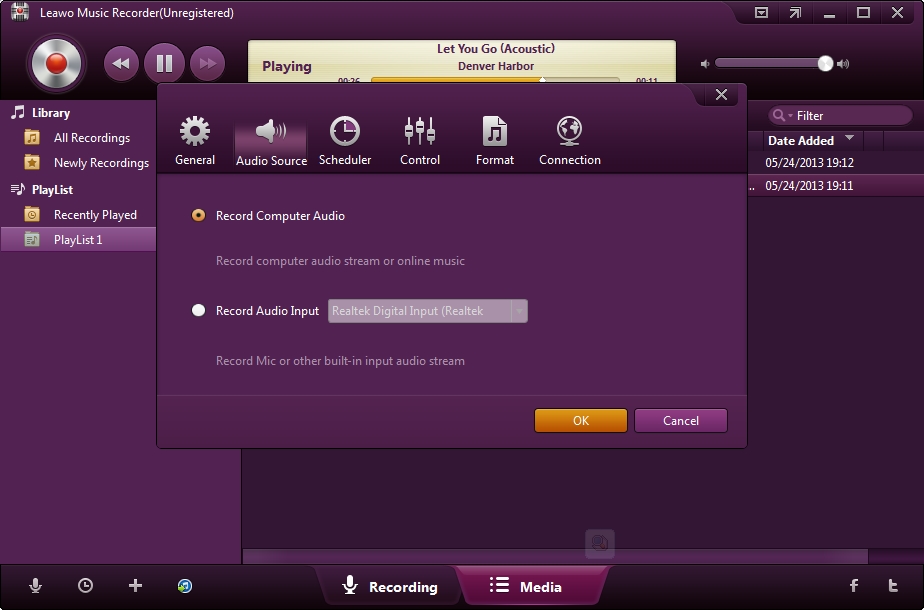 1. After kicking it off, click the "Audio Source" icon on the main interface to set audio source firstly. To record a radio show on computer, select "Record Computer Audio" option. 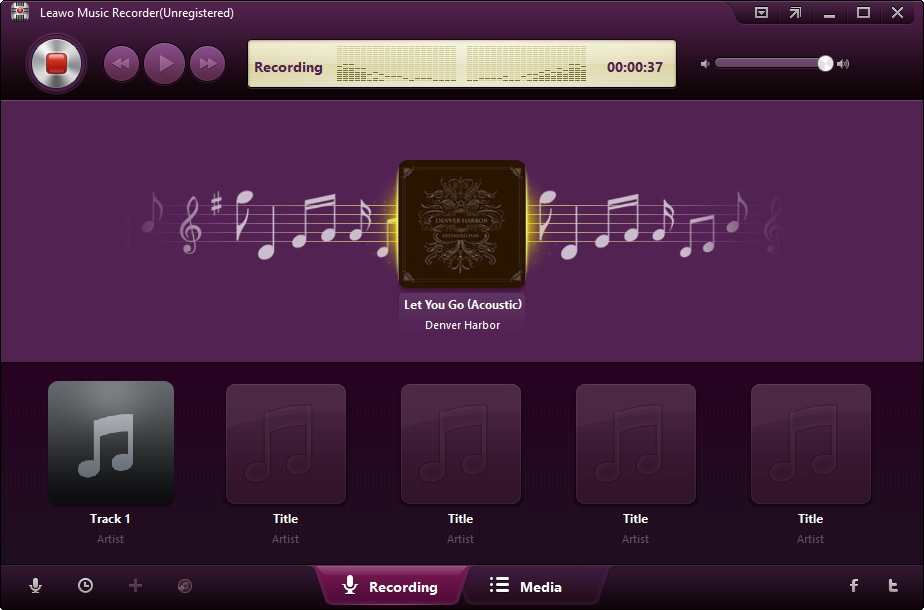 2. To start recording, hit the big red “Start” button at the top left corner. Then you can play your radio show. Also you can set the timer to record audio. Click the second icon at the bottom left corner to enter the Recording Task Scheduler and set the time duration. 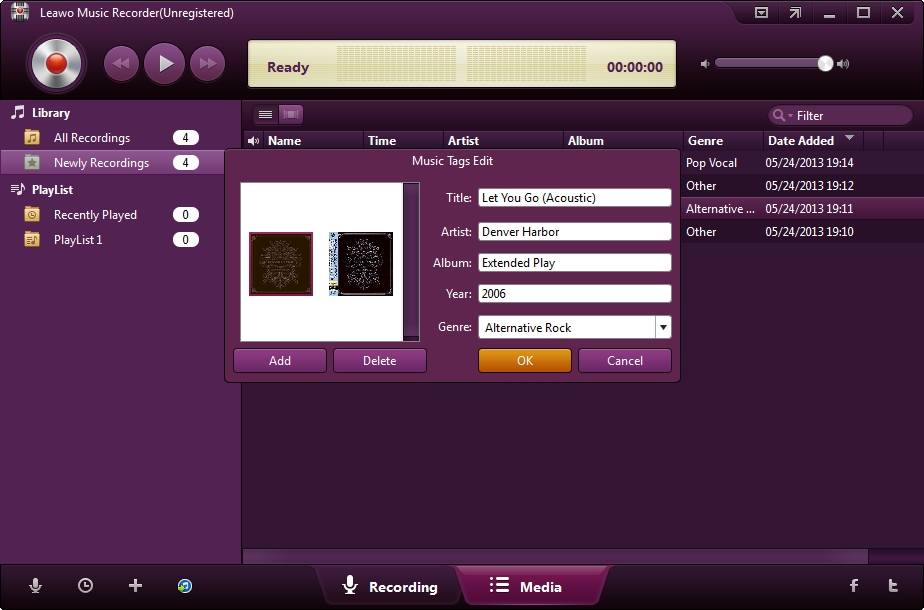 3. For music fans the Leawo Music Recorder has a very useful feature. It could automatically search, download and add music tags to your recordings. But you are allowed to edit the music tags manually. In the “Media” section, you can check out all the recordings in the "Library". And then you can right click a recording, choose "Edit Music Tags" and edit the music tag by yourself.

After finishing recording and editing radio shows, you could also share them to your iTunes within one click. Then you coudl enjoy them on your iPhone/iPad/iPod. Apart for recording radio shows on computer, the music/audio recording software also enables users to record from lots of online streaming music sites. For example, you could record music from YouTube with the software. If you are interested in, check it out.

Part 4: How to Record A Radio Show via Streamosaur

Streammosaur is a free recording tool that is used to record kinds of audio in MP3 and WAV output format. The audio from web stream or radio broadcast can not only be recorded via Streamosaur, but also the audio coming from the sound card, the microphone, and the input lines from different sources like tape player and record player can be recorded via this software. Nearly all the audio which can be played on your computer also can be recorded with Streamosaur and saved as MP3 and WAV format. The following tips are the guidance of how to record a radio show via Streamosaur.
1. Download and install Streamosaur on your computer and then launch it on the computer. Before the recording work begins, you need to set an output format for your recorded audio files, the format WAV or MP3 can be selected as you like. Then choose a target folder to save the recorded files by clicking on the button “Set”. Finally, click on the “Record” button, you can record the radio show directly. 2. If you want to end the radio show recording, click on the “Stop” button, then the recording will stop during the recording process. And you can find your recorded radio show on the target folder which you just have saved. Basically, all the recording mentioned above can help you to record your favorite radio shows, and pretty much any kind of audio supported by each one. So you may be wondering what really is the difference, and we will explore that now. Have a look at the table below.

Bonus Tips: How to start your own radio show

If you would like to start your own radio show and don’t know how to start? The tips below will do a great favor to you. The following preparations should be done before starting your own radio show.
Firstly, internet connection is the primary essential to help you broadcast online, a stable network enables you to go on your radio show without any interruption.
Secondly, a microphone with great sound quality and simple settings is a must in your own radio show.
Thirdly, to make your shows run smoothly from the beginning to the end, a broadcasting platform is a must to transfer your show to the listeners from all over the world. The platform Radio.co is highly recommended.
Finally, you need a radio licensing to authorize you to broadcast online. Concerning this issue, you can consult the professional authority to get more information.