Does Xbox 360 play DVDs? Does Xbox play DVDs? Can you play DVD on Xbox 360? Actually, Microsoft Xbox is far more than a video game console. Many people prefer to play DVD on Xbox 360. Every Xbox 360 can play DVD movies right out of the box — with no additional parts necessary. Watching a movie on Xbox 360 is a straightforward process. You just need to insert a DVD into the disc drive of Xbox 360 console and turn on the console. The console automatically starts to play the DVD. If you have an HDTV or an EDTV, you’ll get a much sharper picture when you watch movies with your Xbox 360.

It has to be noted, however, that the Xbox 360 shouldn’t really be used as a primary DVD player. A dedicated DVD player offers more features, better image and sound quality, the Xbox 360 works as a DVD player in a pinch, but I recommend getting a real DVD player if you plan on watching a lot of movies.But in many cases people prefer to rip DVD to Xbox 360 first for playback DVD movies further on this game console.

After you switch the console power on and pop your DVD disk into the tray(like a game disc),the DVD movie will be loaded automatically. If you have a movie in the drive when you're using the Dashboard, you can pick the Play DVD option from the bottom of any of the blades. When the movie loads, the movie's menu screen usually appears automatically. You can use the arrow keys and OK button on your remote control (or the directional pad and A button on a regular Xbox 360 controller) to start the movie. Some people can't help wondering why it is necessary to convert DVD to Xbox 360 as Xbox 360 can play DVDs directly. The reasons are listed below. Please take a close look if you have no idea of converting DVD to Xbox 360.

Reason 1: DVD is easy to be scratched and even damaged by day-after-day wear and tear. Ripping DVD is the best way to protect DVD.

Reason 2: Many DVD discs are protected by the coding; different regions have their own DVD region code. If the DVD region doesn’t match with the region of your Xbox console, you cannot play DVD on Xbox. (Because Xbox 360 console can only play discs that are sold in the same region as the console.) In this case, it’s wise to rip DVD to Xbox first with a DVD ripper which has the ability to remove region code from DVD.

Reason 3: Maybe you borrowed some DVDs from a friend or rent from a DVD store or Netflix, and if you rip the DVD to hard drive, you can watch it anytime, and don’t have to care about the time to return it.

Here Leawo DVD Ripper is highly acclaimed among a mass of customers for its omnipotent DVD ripping ability and utmost video quality. As an excellent DVD to Xbox 360 converter, Leawo DVD Ripper can offer you the answer to the question - how can Xbox 360 play DVDs?

Like many converting tools on the market, Leawo DVD Ripper has two versions available as well: Leawo DVD Riper Windows version and Leawo DVD Ripper Mac version. You can click the icon below to download the right version according to your computer's Operating System.

How to Convert DVD to Xbox 360 with Leawo DVD Ripper?

In addtion to directly playing DVDs on Xbox 360, we are talking about another method of playing DVDs on Xbox 360 while well protecting Xbox 360 and DVD disc by converting DVD to Xbox 360 friendly video formats. After converting DVD to Xbox 360, we don't have to insert DVD disc into Xbox 360 any more, what we are required to do is to transfer converted DVD file to Xbox 360 for safe playback via USB. In the following tutorial guide, I am going to give you the answer to the question - can you play DVDs on xbox 360? The converting process is quite simple. It can be done in only several clicks. Here we go! 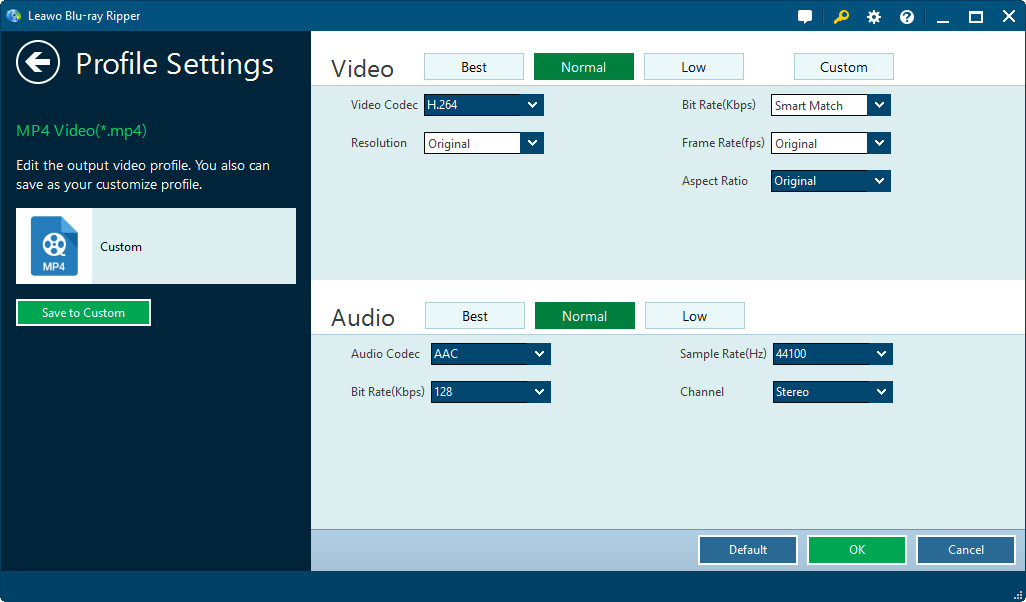 After output format or output device is set, reopen the dro-down list and click "Edit" option to enter the Profile Settings panel. On the Profile Settings panel you can reset parameters including: Video Codec, Quality, Resolution, Bit Rate, Frame Rate, Aspect Ratio, Audio Codec, Audio Quality, Bit Rate, Sample Rate, Channels, etc. If you don't know the exact value, you can leave those values at default and then click "OK" to complete setting.

After detailed setting is completed, click the big green “Convert” button on the top-right of the interface to start the conversion from DVD to Xbox 360.

Leawo software is so considerate to its software users as it elaborately makes a tututial video of Leawo DVD Ripper. You can check it out below.