When it comes to video, YouTube is always the one that comes to your mind. From the latest Marvel movie to Li Ziqi’s idyllic country life to Pokemon, YouTube certainly offers a slew of interesting content. It is probably the biggest video platform that has the most content on earth. The Daily Show, one of the most popular television programs in the US, has joined YouTube TV and it’s well-received by audiences. Many people still don’t know how to download YouTube daily show. Just check this article out.

Airs through Comedy Central, The Daily Show is a long-term American late-night talk which focuses on the day’s top headlines through a sharp, satirical, and reality-based perspective. Started broadcasting in 1996, The Daily Show was hosted by Craig Kilborn and Jon Stuart previously then taken over by Trevor Noah from 2015 till now. Strongly infused with political satire and self-referential humor, The Daily Show has been well-received by most young audiences and won 24 Primetime Emmy Awards, indicating its influence in pop culture. The Daily Show is on YouTube TV now and you can watch it online, just search “YouTube daily show” then you’ll find it.


The Daily Show has a standard format that consists of five sections, the opening, correspondent, recurring, interviews, and closing segment. Beginning with announcer Drew Birns announcing the date and the introduction, the opening segment is the brief headlines and current news. Then the correspondent part is for the host to discuss the current event with fake reporters, presenting the absurd humor in a comedy duo. The election-related topic is always the source of the recurring segment while the following interview segment is the talk with a celebrity guest. The closing is often the show’s humorous wrap-up. Covering the biggest news with a sense of absurdity and comic effect makes it popular as a daily entertainment for audiences.

CleverGet Video Downloader is the most professional software that can download videos from 1000+ online video websites like YouTube, Hulu, Dailymotion, iFilm, Vimeo, Facebook, Myspace, etc. With this software, you can download YouTube videos with quality guaranteed at a high speed. In addition, you can also download the Twitch VOD video. Plus, if you are a fan of marvel movies, you can use CleverGet to download marvel movies without efforts. Now, let’s see how to download YouTube Daily Show videos with CleverGet Video Downloader. First things first, you need to download it from the links above. 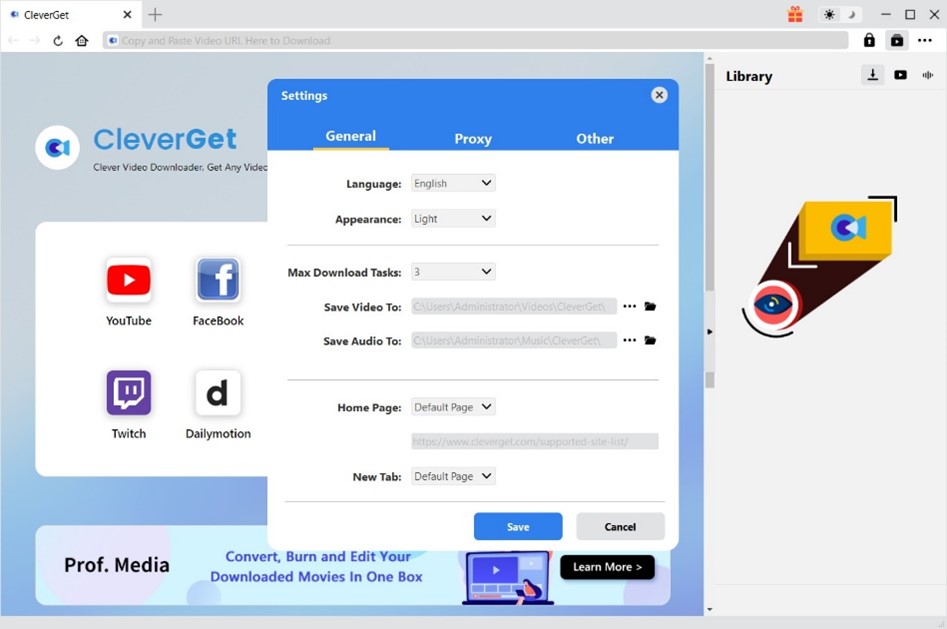 On the main interface of CleverGet, click the YouTube icon to enter its official website. With a built-in browser, you can search for "daily show" and watch it as usual. Once the video is played, the program will automatically detect all downloadable sources in that page. 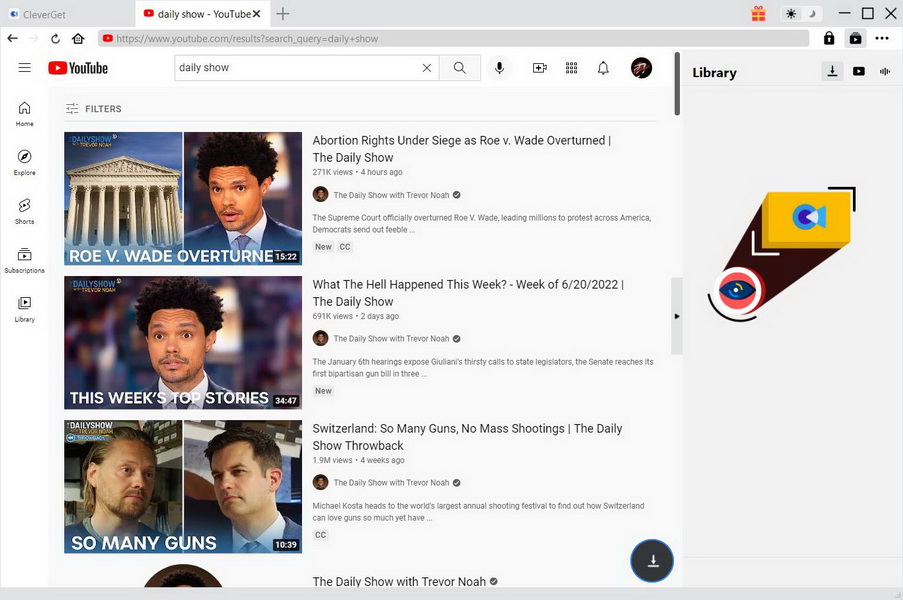 All downloadable sources will be listed in the pop-up "Download" window. With formats, sizes, quality and other detailed parameters listed, you can choose the desired option according to your needs. Then, click the "Download" button to download Youtube Daily Show video immediately. After that, you can check and manage the downloading and downloaded videos in the "Library" sidebar. 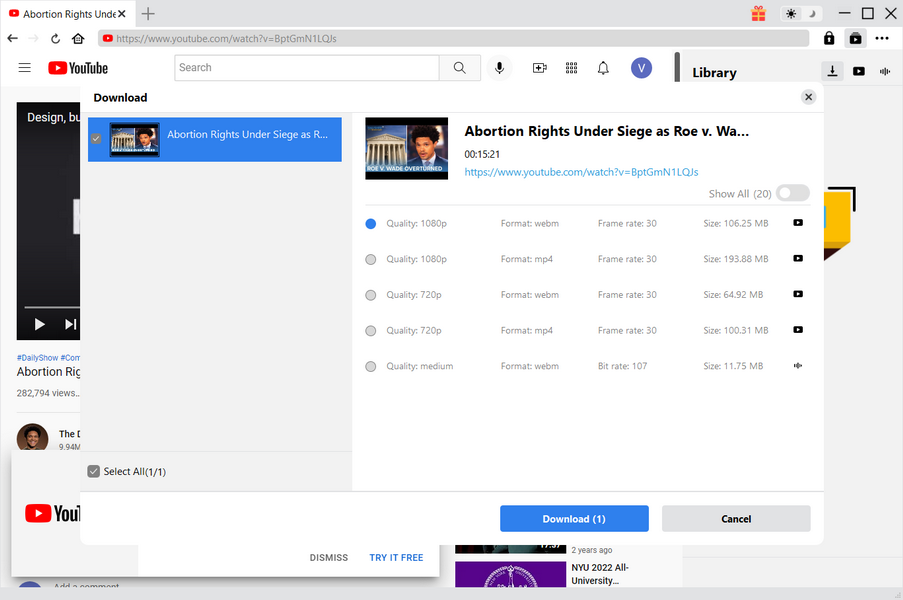 Launched in 2017, YouTube TV allows you to watch 85+ top channels of entertainment, news, live sports, and more. Costing $64.99/month now, which is almost the same as cable TV subscriptions, it’s justified when YouTube TV offers features such as cloud DVR, family sharing, and more. Recently, based on YouTube’s announcement, YouTube TV subscribers will be able to get a package of benefits that consists of 4K streaming and the ability to download media for offline access. If you want to watch YouTube daily show offline, YouTube TV will soon let you download TV shows and videos for offline enjoyment.


There is evidence that the functionality is going to live soon. This latest update of version 5.06.2 of the YouTube TV app introduced a new notification channel as “Offline notification" which can generate a “Looking for incomplete downloads” system notification. The alert is similar to those in the YouTube app and YouTube Music. Along with the latest release, there are several strings in the code, suggesting that the functionality will be soon available. Google has also announced that the new updates allow users to download videos for offline access.

Part 4: Other Ways Except for Watching Daily Show on YouTube

When the timing for the rollout is still not clear, there are other ways to get offline access to The Daily Show. Here’s a list of websites where you can watch The Daily Show and download the show for offline enjoyment.

If you have an Amazon Prime membership, then you’ll be able to download The Daily Show to a phone or tablet running iOS or Android system. On the Amazon Prime app, there’ll be a “Download” button at the bottom of the videos, just click it to start the download. For TV shows there’ll be options next to the individual episode for you to download the whole season. Search “The Daily Show” on Amazon Prime, then you’ll find the way to download it directly on the app. To find the downloaded daily show or videos, you can just click the “Downloads” button on iOS, or My Stuff > Downloads on Android.

The Daily Show is also available on CBS which allows you to take The Daily Show with you on mobile devices. There is a Download & Play feature on CBS as the commercial-free subscribers can store up to 25 episodes or movies offline and watch them on up to 5 different devices. The Commercial Free CBS All Access costs $9.99/month, and the downloaded content is accessible for 30 days from date of download or 48 hours from start of playback. If you downloaded The Daily Show but haven’t finished watching the video by the time it expires, you can download it again. Please mind that the content downloaded can only be played in the US.

Comedy Central App is where you can download daily show other than YouTube. If you have subscribed to Philo, Vidgo, YouTube TV, or Fubo TV then you can simply watch Comedy Central using these apps. All the content on Comedy Central app can be unlocked by these streaming services as valid TV providers. New episodes of The Daily Show will be available the day after they air on TV. You can also find Comedy Central free trial on the streaming services such as Sling TV 3-day, FuboTV, Vidgo, YouTube TV, AT&T TV Now, and most of them offer a one-week free trial. If you can get yourself multiple email accounts, you can get to watch The Daily Show on Comedy Central for almost a month or even longer.

Certainly, The Daily Show is on the Comedy Central website. You don’t need cable to watch it but the TV provider is required to unlock all the content. If you don’t have any of these TV provider accounts, you can still watch in using a 24-hour viewing pass. Simply register the pass with your birthday information then you’ll be able to enjoy The Daily Show for 24 hours from the date of registration. Presumably, if you can get more viewing passes if you have multiple email accounts.

If you have subscribed to Disney+, then you can watch The Daily Show based on your membership. As the latest streamer, Disney+ does not only offer many exclusive movies and TV shows but also the ability to download the videos for offline viewing via different devices. It’s very simple to download The Daily Show from Disney+, just click the “Download” icon which is an arrow pointing down, on the page of a show or movie. You can download TV shows for a whole season or get any episodes you like. To find your downloads, you can just tap the “Download” icon from the navigation at the bottom of the app. There’ll be a full list of downloaded content and they’ll expire if you don’t access the app every 30 days.

That’s all for how to get access to The Daily Show via different channels. While the new download feature is still not yet available on YouTube TV and the other ways to watch The Daily Show are way too complex, you can download the YouTube daily show with Leawo Video Downloader and it’s the best way to enjoy the show. What are you waiting for? Get it now and enjoy the YouTube daily show offline with ease.