Does PS4 Play Blu-ray Movie and How

PlayStation 4 (PS4) is the fourth generation of home video game consoles and currently the best game console in the market, featuring with stunning hardware performance and the DUALSHOCK controller, which includes a touchpad, a "Share" button and a light bar, which allows a separate camera to track its movement. You can even directly share your epic triumphs game experience with your friends by simply press the "Share" button. Yes. One of the most headline-grabbing features of the PS4 is that it supports 4K movie streaming. With the HDMI 2.0 cable connected, you can play 4K movie with PS4 and enjoy it on TV. The HDMI 2.0 cable are designed to work alongside 4k signal to play 4k Blu-ray on your TV.

But it's not really necessary to buy the newer HDMI 2.0 cable as the PS4 will only display a picture of 1080p at 60fps. What we want from Blu-ray movies is its best quality. If the PS4 will not display a 4k picture, then what's the point in bringing it on TV?

An encryption key is a random string of bits, which is created for scrambling and unscrambling data. To play commercial Blu-Ray movies and access some features on Blu-Ray discs, the encryption code is needed. If PS4 won’t play Blu-ray, it is time for you to get your system updated.

2. Blu ray won’t play: The region code on the Blu-ray disc doesn’t match the one on the PS4.

3. Blu ray won’t play: Something wrong with the Blu-ray laser.

Thankfully, we have got some solutions for you to try based on what you think is best to solve the problem:Blu ray won’t play. But if you’ve tried both steps above and your console still isn’t able to read Blu-ray discs, your console needs to come in for a professional check. Sometime, because of the malfunction of laser diode in the PS4 Blu ray, it will fail to read any disc. When you notice a circular scratch on the disc, it may mean that there is some physical damage to the PS4 laser lens.

To avoid further damage, it is wise to ask professional help, you can follow this link to setup a service case through WebRMA: https://scea.secure.force.com/service

Above, we have present several answers to the question why PS4 won’t play Blu-ray. To help you solve the problem “Blu ray won’t play” effectively, we also recommend you some good solutions. Check out below how we do it.

When Blu ray won’t play, try to renew security encryption. Below I will show you two useful methods.

1. Renew encryption key on the PS4 system software over the Internet connection.

Here’s something you should note before starting the update process.

Here’s how to update the PS4 software 2. Renew encryption key on the PS4 system software without the Internet connection Part 3: How to play Blu-ray on PS4 with Leawo Blu-ray Copy?

Leawo Blu-ray Copy is a top rated program to copy DVD/Blu-ray disc at zero quality loss. This Blu-ray copy software could copy Blu-ray disc of BD25 and BD50, copy Blu-ray folder and ISO image file, copy DVD disc of DVD-9/DVD-5, DVD folder and DVD ISO image file as well. It preforms pretty well to copy Blu-ray and backup DVD regardless of disc protection and region restriction. That is to say no matter you get a Blu-ray disc with AACS, BD+ or the latest MKB protection in region A, B, or C, or CSS-DVD disc ranging from region 0 to 6, this Blu-ray copier could easily copy Blu-ray and DVD disc and have the region code removed in the copy. I am going to show you how to make PS4 play Blu-ray using Leawo Blu-ray Copy.

Step 2: Add the source Blu-ray disc to the software.

Choose the target copy mode from three options, namely full movie, main movie and custom mode. Full movie means to copy all Blu-ray disc contents, main movie lets you copy the movie only, while custom mode allows you to choose certain titles to copy and discard the rest. Remember to specify the disc type at the bottom. There are 4 options available, BD50, BD25, DVD-9 and DVD-5.

Step 4: Set a directory to save the output backup contents.

Click the button Copy from the toolbar and a sidebar will pop up, where you can set Copy to and Save to directory. If you tick Copy to Folder or Copy to ISO File, it means you will copy the Blu-ray disc in a folder or as an ISO file saved in the directory that you set in the Save to box, respectively. You may copy the source Blu-ray to a new disc as well. After you set the Copy to and Save to options, click the Copy button at the bottom of the sidebar to copy the Blu-ray disc. Any region code will be removed thoroughly during this process.

Track down on the real time status through the green progress bar, which tells you exactly how much percentage has been done. PS4 Blu-ray playback is available once the copying completes. 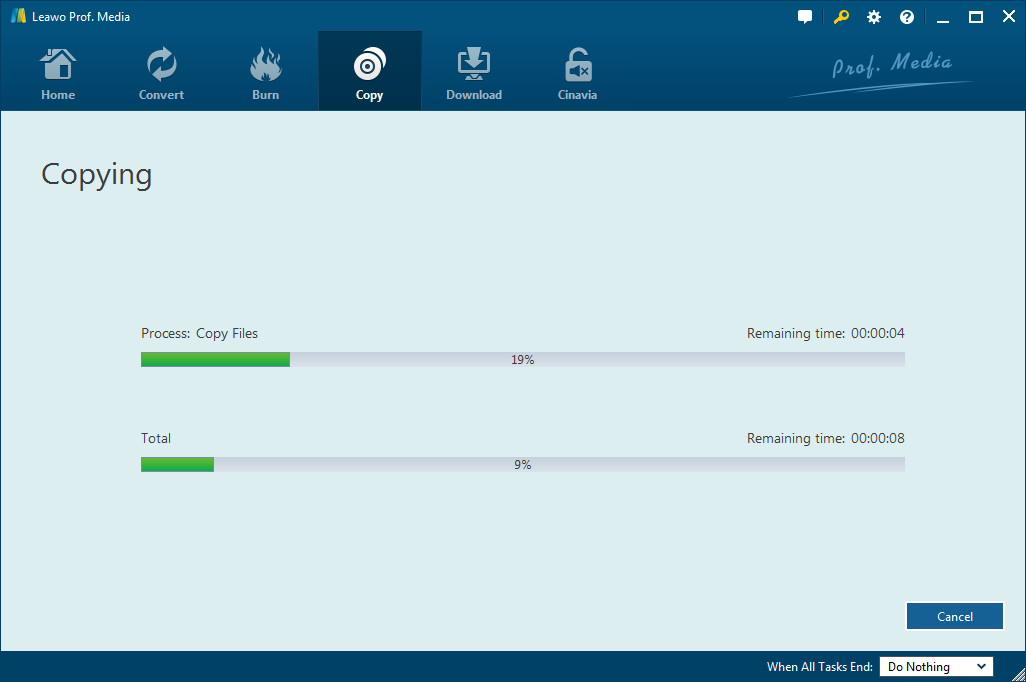 Part 4: How to play Blu-ray on PS4 with Leawo Blu-ray Ripper?

There is a dual-function program - Leawo Blu-ray Ripper, capable of ripping and converting Blu-ray DVD to 180+ video/ audio with 100% original quality and 6X faster speed. It is a smart way to handle region locked Blu-rays too. With it, PS4 Blu-ray playback is not a problem at all because it will clear the region restrictions and convert the Blu-ray to a more common format for playback on any player, let alone PS4. Here is how to use this program to rip and convert Blu-ray to MP4 for playback on PS4. Click the Format button which currently has the MP4 Video label on it and click Change from the format drop down menu and choose the target format. PS4 supports MP4, so you can stick with the default MP4 profile to convert Blu-ray to MP4 or choose other MP4 profiles like HD MP4. Click the Convert button on the toolbar and set a directory for saving output file. Click the round button Convert later to kick off the conversion. Once it is done, you will have your region-free MP4 files saved in your drive. Transfer it to your PS4 for Blu-ray playback. How to play video on PS4 via USB?

To play video on PS4 via USB, you need to rip your video files to the supported video format by PS4 firstly, then get your USB drive plugged to your computer. To make sure your USB is usable once it is connected to PS4, your drive should be formatted in exFAT or FAT32 file system. After that, set up a folder for placing video in the USB drive, then transfer the video files to the folder on USB drive. Once the video files have been moved to USB drive, you can remove USB drive from computer and then get the USB drive plugged into the USB port of PS4. Afterwards, run PS4 media player app, then your USB drive will show up for your option. Choose USB drive and view the video that you need to play, press the button from the controller to control what you want for playback.

The above sections have perfectly answered your question "does PS4 play Blu-ray" with details explained step by step. Leawo Blu-ray Copy and Leawo Blu-ray Ripper are two brilliant software programs to enable you to make a backup of Blu-ray disc or directly rip and convert Blu-ray to region free formats for smooth playback on PS4. Region locked Blu-rays will no longer be a problem to free playback everywhere. Oppositely, we have two smart solutions to handle region codes without hurting the source Blu-ray quality. Obviously you will get something you need from them. If you have Blu-ray discs you can't play due to the region codes on them and want the quickest solution to the problem, just get a region-free Blu-ray player.