Transfer Data from iOS to Mac

Virtual reality attracts our eyes because of its fantastic way in traveling by using the technology. Virtual reality makes you live in the virtual space through the headset and the tracking of motion. It is an innovative technology with a bright future for many years, but it is not so popular at that time, this situation has changed these years as the virtual reality products are hot sales currently. Below are the best virtual reality headset 2018 to be compared to the different aspects including the price, the device and the settings.

Oculus Rift is the first big brand in the current trend of virtual reality, it still plays the major role in VR headset. Oculus Rift in retail version will cost you more money, but it is more advanced than other versions. This headset is similar to Vive from the technology perspective. But Oculus Touch motion controller is included to support the large VR device as the same as Vive, it sells $399 and cheaper than HTC Vive in $200, it is even cheaper than the motion controller of PlayStation. Pansonite is the one you get without paying at a high price but closing to high-end VR headset. The front cloth design is its feature, it also has the adjustable band in availability. It would be great if you have a headphone jack or the adapter, because the built-in headphone exists in Pansonite headset. It is very exciting to play roller coaster in this headset, you will experience a blast without any other things interrupting your experience from this headset, Pasonite is one of the best VR headsets which cost you at a reasonable price. Samsung Gear VR remains the popular VR headset in the current market. A controller has been added to the new version of this headset, which brings a tactile experience what the traditional games cannot compare with. Furthermore, you run the application with your voice and re-adjust the view or search for it. The interface of Samsung has been updated so that it is more exquisite than ever. The virtual space is set in the luxury home, the interaction in the interface runs more smoothly than the previous one. The apps cover various kinds of genres such as education, entertainment and game. HTC can make you use your phone in virtual reality, also it will allow you to check the real world as you require. Some of the innovative kits are launched by Vive, which include trackers, it can help you bring the items in the real world to the virtual device. Vive is striving to keep up with, though it has over 375 games and applications. HTC not only enables you to purchase the separated apps, it also has the available Viveport service in subscribing. It just needs $6.99 every month, you can select 5 games or applications from Viveport. It just needs you $399, then you can obtain a headset which is really independent of your phone. When you take the headset out of packaging, that means you have owned the virtual world. This headset comes from the library of Google Daydream, it owns more than 350 games and applications, what makes the Mirage Solo different from others are the sensors and the integrated cameras, the World Sense movement tracking is also the one to make it apart from others. World Sense can make the users move in six degrees for freedom in the virtual world. Provided that you want to find the VR headset to fit your smartphone without spending much money, it should be the one equipped with insertion and support the VR games and application, also it must be affordable as well. Here will introduce the best virtual reality headset for iPhone as below:

This headset is the cheaper one for your selection, it is designed to be suitable for the users like a big family or the small room. The focus can be changed by a wheel in it, this design also has the option of wider lens and the adapter fit for the old models iPhone 5. This headset also owns one set of apps for free view. This headset is a very sturdy item at a reasonable price, its design is particularly fit for the large smartphone, as the display screen can be up to six inches, which means the various kinds of iPhone is available to it. It also features adjustable pupil and has the function of focus. Zeiss VR One Plus

This headset is very special because of its eye box, space enables the users to view the screen and there is no need to adjust the pupil distance, additionally, the headset can be easily used even you are wearing glasses, it is one of the most convenient headsets in availability. The side ventilated connection can prevent the screen and the glasses become obscure. The above is the best rated vr headset for iPhone, but the compatibility should be noted and it depends on the size of iPhone you use.

Part 3: How to transfer VR video from iPhone to Mac via iTransfer for Mac

Since there are so many great videos in the best smartphone virtual reality headset, if you want to transfer VR video from iPhone to Mac, what would be the best method for this transfer? Here we will recommend you a wonderful software - Leawo iTransfer for Mac.

Leawo iTransfer for Mac is used for transferring various kind of files between Apple devices and Mac such as apps, music, photos and so on. High security and 100% reliability can be assured during the transfer, the transfer speed in safety with no data loss will ensure you gain the high-quality VR video in your target folder. Below are the detailed steps for transferring for your reference: 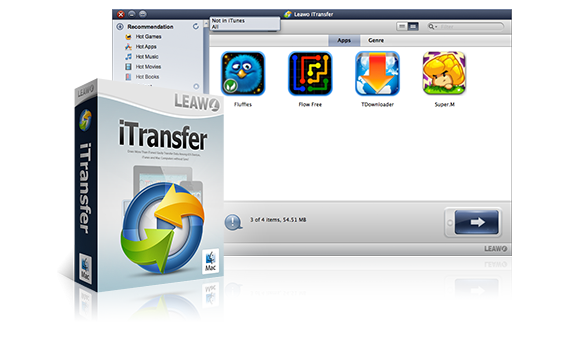 1. Launch the iTransfer for Mac on computer and connect your iPhone to it, then the information of iPhone will be shown in the libraries of the software and be listed in the left sidebar. 2. Select the item in the library that you need to transfer, then click the button on the right bottom to begin to transfer the files as you need; Or you can select the files by holding the key "Command", finally choose the option " Transfer to > My Computer". 3. A pane will pop up and you need to check "Transfer to List" and "Save to Folder". Then you can click the "Change" button to select to target folder to save your transferred files. Finally, click the right bottom button "Transfer Now" to begin to transfer the files. 4. The transfer progress will be displayed and the files you need to transfer will be found in your iPhone once the transfer is completed.