Burn Videos and Photos in 180+ formats to Blu-ray/DVD Movies with 40+ DVD Menus Templates in Ease for Mac users!

Leawo Blu-ray Creator for Mac is well developed to support more than 180 video formats. Video in all popular formats you can find out there like AVI, MKV, MOV, MP4, WMV and FLV can be burnt to Blu-ray/DVD disc using this program. With it you can easily enjoy the pleasure that only high-definition Blu-ray can give you.

Got bored with the same old look of the menu on your Blu-ray disc? Leawo Blu-ray Creator for Mac provides you with various kinds of disc menu customization features to customize your disc menu. 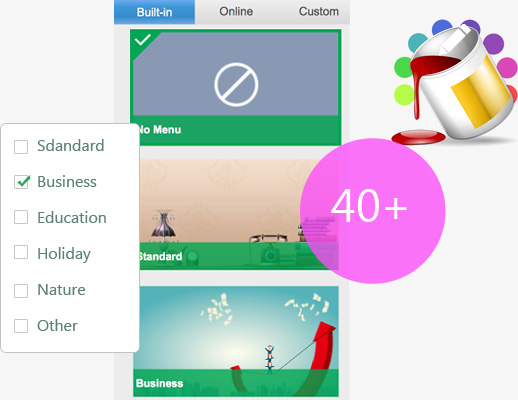 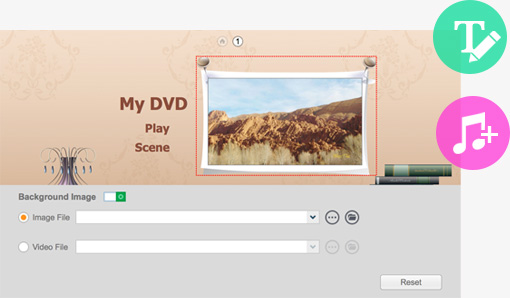 To help you get rid of the same old look of the menu on your disc, Leawo Blu-ray Creator for Mac has 40+ preset disc menu templates divided into 8 different categories for you to choose from.

With assorted menu customization features provided by this Blu-ray dvd burner at your disposal, you can change the menu background to whatever pictures or even videos you like, add your favorite song to the menu as the background and rename the titles on the menu as you like.

Want your photo to be stored and presented to other people in a special way? This Blu-ray burner software features a photo slideshow burner that allows you to make photo slideshows and burn photos to Blu-ray/DVD disc.

Make photo slideshow and burn it to Blu-ray DVD efficiently

This Blu-ray burning software could bring you the most efficient photo slideshow making and burning experience. Using Leawo Blu-ray Creator for Mac to create a photo slideshow and burn it to Blu-ray/DVD is so simple and efficient that it can be done within a few clicks.

Edit for burning Blu-ray in 360° angle

This video burning program comes with several practical video editing features: Trim, Crop, Watermark, Effect, 3D, Remove Noise and Create Chapter. Trim your video to burn the part you want; magnify the screen using Crop feature; add watermark to the video; adjust the parameter like saturation, contrast and brightness to the ideal level and apply marvelous 3D effects on regular 2D videos；Remove noise to watch movies for better audio enjoyment; create chapter to divide 1 video into multiple parts. With the built-in video editor, you are free to make any change you want to your video.

One click to burn ISO image files to blank disc

Other than burning videos to Blu-ray/DVD discs, this Blu-ray Creator is also capable of converting video into Blu-ray/DVD folder and ISO image file and saving the files in your computer, which can be done at the same time you burn video to disc.

Comprehensive support for different types of Blu-ray and DVD discs

This Blu-ray DVD burner has a video player built-in that would allow you to play any video you’ve imported to the program directly.

Equipped with a built-in snapper, Leawo Blu-ray Creator for Mac enables users to get screenshots during the playback with a simple click and save them as JPG, PNG or BMP picture format.

The chapters from the original MP4, MKV, Blu-ray source movies and Final Cut can also be saved in the output, which keeps you from the trouble to recreate the same chapters again.

> How to Convert Video to Blu-ray on Mac

> How to Convert and Burn iMovie Project to DVD on Mac

Rip Blu-ray/DVD to video and audio in 180+ formats.

Any 3rd-party product names, trademarks, logos and images occasionally mentioned on this site belong to their owners. These might include but not be limited to YouTube, Apple, Amazon, Adobe, Netflix, etc. Leawo Software is independent of all of these property owners.