"I just bought a Blu-ray disc, and it is about the newly released movie Star Wars: The Force Awakens (2015). I would like to watch the Blu-ray movie on my iPad during my business trip, but I find out that iPad doesn't support Blu-ray format. I was wondering if there is any solution."

If I were in your position, I would choose Leawo Blu-ray Ripper as it possesses the following key features. Leawo Blu-ray Ripper is a professional Blu-ray ripping and converting program to decrypt, rip, and convert Blu-ray/DVD movies to 180+ video and audio files for diverse players and devices, and backup Blu-ray to hard drive or blank disc. This Blu-ray video converter could successfully rip Blu-ray movies and then convert Blu-ray to various videos for unlimited playback on portable mobile devices on the go, be it iPad, iPhone, Android smartphone, Sony devices, etc.

Leawo Blu-ray Ripper can allow you to trim video length, crop video size, adjust video effect and add image or text watermark to the source Blu-ray files for customization in Edit panel.
As a piece of professional Blu-ray converter software, Leawo Blu-ray Ripper could remove copy protection and region limitation and rip Blu-ray to digital copy in 180+ formats. In addition, it allows users to adjust output video and audio parameters like video codec, audio codec, video size, bit rate, aspect ratio, frame rate, etc.
If you want to choose subtitles and audio tracks from source Blu-ray movie, you can also realize it with Leawo Blu-ray Ripper. It offers multiple tracks for you to select, making it friendlier to rip copy-protected Blu-ray to those non-English speakers.
It offers 6 different 3D modes: Red/Cyan, Red/Blue, Red/Green, Blue/Yellow, Interleaved, Side by Side. Users are free to upload to YouTube 3D Channel; 3D TV, glass-free 3D smartphones like HTC EVO 3D, LG Optimus 3D P920 and some other compatible 3D players.

Part 3: How to Convert Blu-ray Movies? 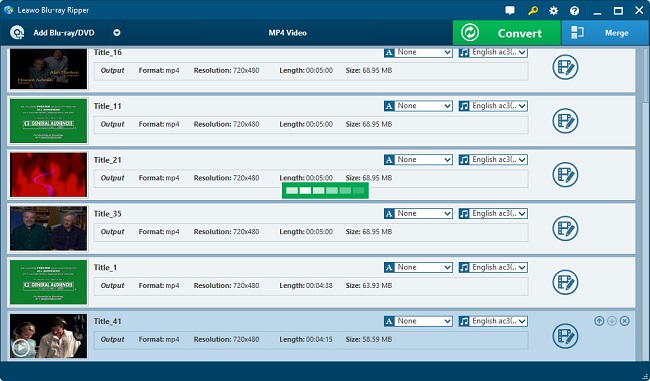 Tip: The Blu-ray video converter allows you to select desired subtitles and audio tracks from source Blu-ray movies. You can achieve the selections via opening the drop-down boxes of "Subtitles" and "Audio tracks" in each loaded Blu-ray file.

Click the drop-down list named by "MP4 Video" by default and then choose "Change" to pop up Profile panel. During this process, you can set either output format like "MP4","MKV" in "Format" column or output device name directly like "iPad", "PS3" in "Device" column. 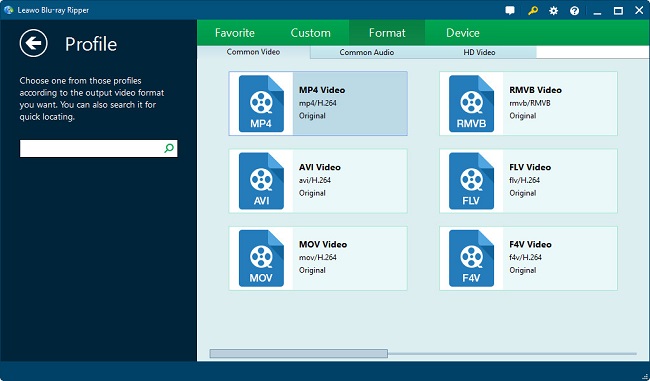 After you have set output format or device name, you could even click "MP4 Video > Edit" button to adjust the video and audio parameters of output files, including video codec, audio codec, bit rate, aspect ratio, frame rate, channel, etc. This step is optional as you can skip it or leave those parameters at default if you don't know the exact values to be set.

Note: Like what is mentioned above, the drop-down list is named "MP4 Video" by default. If you have changed the output format to "MKV", it will show "MKV Video" instead and will continue to show the same name next time you kick off the program, and accordingly you shall click "MKV Video > Edit" button to adjust the video and audio parameters of output files. 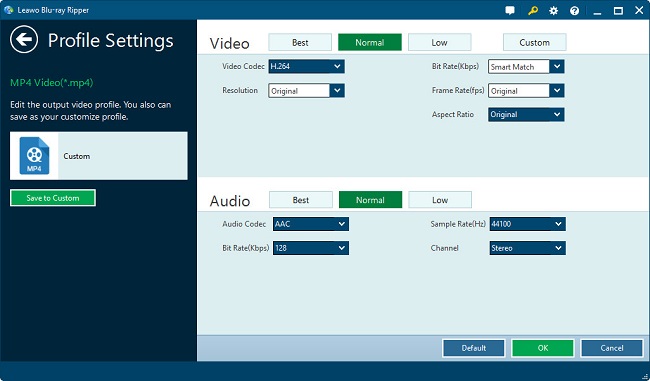 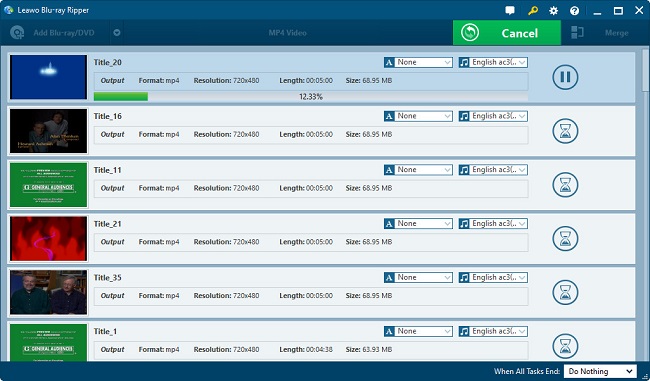