Ever since the existence of Blu-ray discs(shorten as BD), the hottest trend of Blu-ray movies has been always drawing people’s attention as the optical disc format was developed to enable recording, rewriting and playback of high-definition(HD) videos, as well as storing large amounts of data.

To play Blu-ray videos, it needs a smart HD TV set via a Blu-ray player. It is an excellent experience to enjoy HD movies on large screens, resembling the experience we might have in a movie theater to some extent. But a decent Blu-ray player does cost you a sum of money, much higher than a movie theater ticket. So some of you might considering playing Blu-ray movies on HDTV or smart TV via USB, some would like to transfer Blu-ray to their favorite mobile devices such as iPad, iPhone 6s Plus, Android smartphone and so on, and some just simply want to convert Blu-ray to common video formats on Mac or Windows. Regardless of which group of people you belong to, you need to ask Blu-ray ripper for help. Pros:In addition to Blu-ray conversion, it features “Full Disc Copy” thus it allows users to back up Blu-ray to PC with a few mouse clicks. It supports a variety of output formats and output devices. With the help of Pavtube Blu-ray ripper, users can convert 2D Blu-ray to 3D videos as well.

Cons: Although it allows users to trim video length, it cannot be used to divide movie evenly into several segments. What’s worse, it cannot convert any common video format on Mac and Windows.

Aiseesoft Blu-ray Ripper is the best program that Aiseesoft has offered.It allows users to import movies from BD and DVD discs or folders on your PC.Since it lets you add pretty much any video file as input, its format support is quite excellent. All the popular video and audio formats are there, including MKV, WMV, MOV, and MP4. It supports countless output devices like iPhone, iPad, Apple TV, Android smartphones and tablets, and other multimedia playback devices. The ripper has a great user interface, which makes it easy to navigate the application and use it. Pros: Aiseesoft Blu-ray ripper is good at decrypting Blu-ray discs,DVDs and any videos. Adopting CUDA accelerating technology, the conversion time is hugely shorten. And it is quite a simple task to convert 2D Blu-ray/DVD/video to 3D with the help of the ripper. Pros: This program is simple to use; you can start a conversion with as little as one click.

Cons: Its customization tools are buried in the application’s expert mode, and it doesn’t have Mac version. Pros:Xilisoft Blu-ray Ripper can convert both standard Blu-ray videos and 3D Blu-ray videos to SD and HD video formats such as MKV, AVI, WMV, TS, etc. And it can preserve 3D effects when your source is 3D Blu-ray movie.

Cons: The Blu-ray ripper software cannot decrypt Blu-ray protections and it requires AnyDVD HD to be installed to rip Blu-ray. Also, DVD disc ripping is not supported by the app.

After reading the brief introduction about the five Blu-ray rippers above, you can choose the best Blu-ray ripper in your own according to your preference and spending budget.

Comparison between These 5 Blu-ray Rippers

We take Leawo Blu-ray Ripper as an example to show you how to convert Blu-ray file, be it Blu-ray disc or Blu-ray folder. Please check it out.

Guide on how to rip Blu-ray file with Leawo Blu-ray Ripper:

On the processing list panel, select one file, and then click the video format button (the button next to Add Blu-ray/DVD button) to set output profile. Click “Change” button to select a profile as output format, click “Edit” button to adjust the parameters of selected profile. Also you can choose to click “Apply to all” button to set select profile as output profile for all loaded files. You could add formats to Favorite, Custom profile, select profile from Format or Device groups on Profile panel. 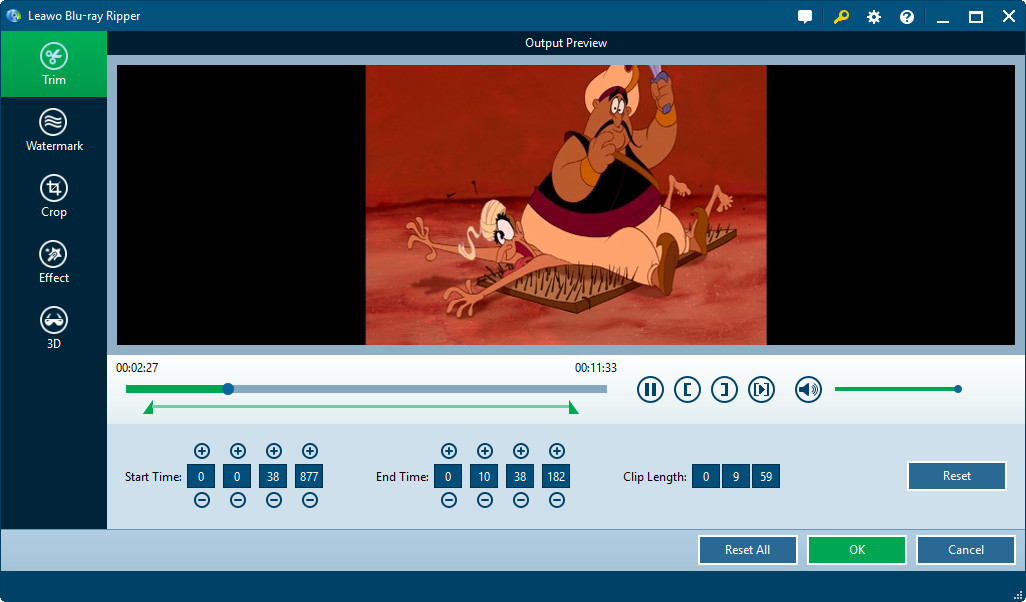 You could see a big green “Convert” button on the sub-menu bar. To call out the converting setting panel, click that button. You need to set output directory on it and then click the “Convert” button to start Blu-ray to video/audio converting. You can transfer the converted files to your devices or players for unlimited playback after conversion.