How to Copy Blu-ray Disc to DVD with Easy Steps

As optical storage media, Blu-ray and DVD have been widely used for many purposes. If you prefer to watch Blu-ray disc movies on Blu-ray players at home in your spare time, you must have collected a large number of Blu-ray and DVD discs which have been dust-covered for many years. However, are there any possibilities to review these older Blu-ray discs? Of course, if you are a Hollywood fan, these Blu-ray classical Hollywood movies can be worth watching again and again. While, if your friends would like to share these Blu-ray discs, what would you do? Buying a new empty Blu-ray disc and sending the disc directly to them? It is expensive in the Blu-ray disc and shipping fees. Sharing the digital Blu-ray movies? Here, you can use a common DVD disc to store the content of the Blu-ray disc to which is much cheaper in the price.

Part 1: Why Is It Necessary to Copy Blu-ray Disc to DVD

For some of you, the statement above may not be strong enough to convince you. Besides, are there any other aspects that can be taken into consideration while copying Blu-ray disc to DVD? Or in other words, why is it necessary to copy Blu-ray disc to DVD? If this is your first time in thinking about the copying process from Blu-ray to DVD, you can get your own idea from the following two aspects.

More economical. In comparison, Blu-ray and DVD are not only different in the capacity size and the picture quality, but also in the aspect of the sold price. According to some basic data of the best online places to buy Blu-ray/DVD discs, Blu-ray would cost you a bit more than DVD. With the help of some professional Blu-ray copy program, the Blu-ray content can be fully retained in the DVD disc. In order to perfectly copy Blu-ray disc to DVD, what you must hold in hand is a powerful Blu-ray copy program which allows users to copy Blu-ray disc to any other digital formats, such as DVD, Blu-ray, ISO and so on. Now if you are searching for such a great copying program, you need to read the following information carefully.

To copy Blu-ray disc content to DVD disc, the first thing you need is a good Blu-ray ripper tools. Here, Leawo Blu-ray Ripper is the best Blu-ray to audio converter on the market. It could rip and convert Blu-ray to video and extract audio off Blu-ray to save in all formats for any media player and device. It could rip and convert Blu-ray to MP4, Blu-ray to MKV, Blu-ray to AVI, Blu-ray to WMV, etc., and extract audio off Blu-ray/DVD to save in MP3, AAC, FLAC, etc. More than 180 video and audio formats are supported for output. In addition, Leawo Blu-ray Ripper has a high conversion speed. 3 types of GPU acceleration technologies: NVIDIA CUDA acceleration, Intel Quick System and AMD APP acceleration. It delivers high-speed conversion with satisfying quality, saving you're a huge amount of time on ripping Blu-ray/DVD to video.

Among various DVD burning program, Leawo DVD Creator can be regarded as one of the most comprehensive and professional burning programs. With Leawo DVD Creator, you can burn more than 180 formats videos in formats like RMVB, MKV, MP4, WMV, Xvid, MOV, and FLV to DVD-9 and DVD-5 discs with 6X faster speed than others. With the support for Intel Quick Sync acceleration technology, Leawo DVD Creator ensures the fast burning speed while you are burning the RMVB videos to DVD. Furthermore, Leawo DVD Creator can preserve the quality of the original video while burning the video to DVD and ensures that the DVD playback would look just as good as the original video. Also, you can edit the video to make it your own style, such as trimming, cropping, adding watermark to the video and so on. 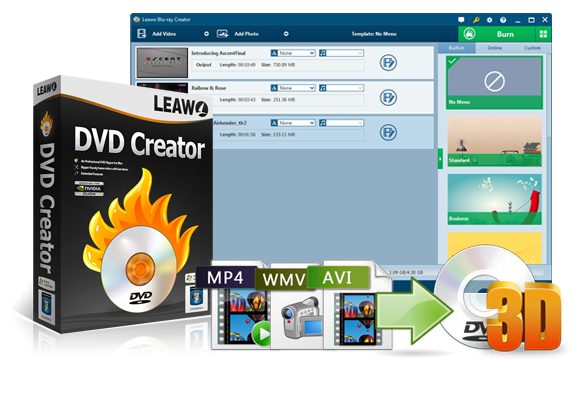 Yes, you are not standing in the wrong place. The third Blu-ray to DVD copy program I will introduce is Blu-ray to DVD Pro. This is the copier's real name. So, without any doubts, this program is really designed to copy Blu-ray to DVD, including DVD-5, DVD-9 and two DVD-5s. Also, the copy program is able to copy Blu-ray movies and save them on hard disk drive. Due to the SmartExpress HD video codec module, the effective and fast burn has been ensured. You can also easily compress the Blu-ray on hard disk to DVD-R/RW. Furthermore, it can copy Blu-ray to AVCHD with only one click which has a better video and audio effect. However, the AVCHD are not compatible with DVD players. You need to prepare a Blu-ray player to play the AVCHD files. This copy program can be run on Windows 10, 8.1, 8 and 7. Your operating performance should keep under the 1.0 GHz or faster processor with 512MB of RAM. Also, you had better own the 50GB free hard disc space at least. Part 3: How to Copy Blu-ray Disc to DVD

If you want to copy the content of Blu-ray discs to DVD discs so that you can watch the movies on your DVD player, how could you do that? First, you need to rip the Blu-ray discs and get the content to your computer, here is the tutorial for how to rip Blu-ray discs first.

Step 1. Load the Blu-ray disc. Insert a Blu-ray disc that you want to rip into computer's Blu-ray drive, and click "Add Blu-ray/DVD" button on the main interface to load Blu-ray disc after you launch this program. Step 2. Select the output format. Click the drop-down list next to "Add Blu-ray/DVD" button, and choose "Change" to enter Profile setting panel where you can freely set output format for your laptop. After you have set output format, you could click the same drop-down list and click " Edit" button to adjust the video and audio parameters of output files, including video codec, audio codec, bit rate, aspect ratio, frame rate, channel, etc. Step 5. You can click "Add Blu-ray/DVD" button to load the ripped Blu-ray movies or you can simply drag the movies to the program. Step 6. If you need, select a disc menu template from the right sidebar and then click the middle of it to get instant preview. You could even edit the disc menu by changing background music/photo, title, text font, etc. Step 7. Click the big green "Burn" button to call out the setting sidebar, where you need to set Burn to (Multiple choices allowed), Disc Label and Save to options. To burn MP4 to DVD disc, select disc drive as target under Burn to. The Burn to option allows multiple choices. Step 8. Click the big green "Burn" button to call out the setting sidebar, where you need to set Burn to (Multiple choices allowed), Disc Label and Save to options. To burn MP4 to DVD disc, select disc drive as target under Burn to. The Burn to option allows multiple choices. As the two main optical storage media, DVD and Blu-ray can be widely used for various purposes in our life. In order to use them more properly, copying Blu-ray to DVD is necessarily needed for some specific purposes. Today, you will never be concerned about the conversion of Blu-ray to DVD any more by referring to the above solutions. Just make full use of Leawo Blu-ray Ripper and Leawo DVD Creator and follow their step-by-step instructions to complete the copying process.