How to Convert and Burn Christmas Movie to DVD Disc 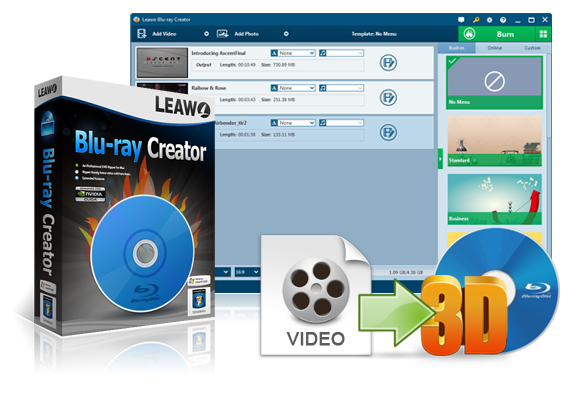 ☉ Create photo slideshows and burn them to DVD/Blu-ray disc.

The below steps show you how to convert and burn Christmas video and movies to DVD disc. You could follow the below steps to learn how to burn playable Christmas DVDs from your Christmas movies and videos.

Click the "Add Video" button to import Christmas videos. Select the DVD disc type (select DVD-9 or DVD-5 according to your inserted DVD disc), quality and aspect ratio at the bottom. Meanwhile, you could select display mode, play back videos, select subtitles and audio tracks, etc. 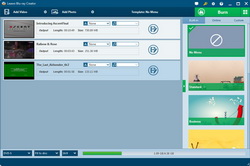 If you want to get a disc menu for your Christmas videos after burning to DVD disc, select one on the right side bar. The selected disc menu could be previewed via a click in the center. On the preview window, if you need, click the pencil icon to edit disc menu by changing background music, background image, title position, text font, text color, etc. 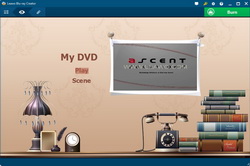 Go back to the main interface and then click the big green "Burn" button. More burning settings are waiting for you: "Burn To" (select DVD disc drive here. This place allows multiple choices. You could burn Christmas videos to DVD disc while still generate an iSO file on computer as backup), "Volume Label", "Save to", etc. Move mouse to the upper-right corner, open the wheel icon and Burn option, then you could set Burning Engine and TV Standard. 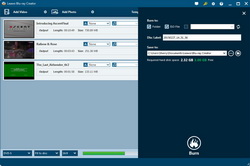 Finally, start burning Christmas videos to DVD disc by clicking the "Burn" button on the side bar. 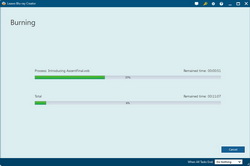 Aspiring rock singer Jack Frost (Michael Keaton) has been struggling for years to make it big, often missing out on time with wife Gabby (Kelly Preston) and son Charlie (Joseph Cross) along the way. While driving to a music mogul's party one wintry evening, Jack realizes that his family is more important than his career, and turns his car around - only to plunge to his death when he swerves off the road in a blizzard! One year on, an angry and depressed Charlie is still mourning for his father. Deciding to make a snowman in the garden (one of the few activities Jack always found time for), Charlie gives it his dad's old scarf - only for the snowman to come to life as a reincarnated Jack. Determined to compensate for the mistakes he made in his lifetime, the new, snow-based Jack sets out to be the kind of father Charlie always wanted. Christmas family comedy directed by independent filmmaker Jon Favreau. Will Ferrell stars as Buddy, a human being who has spent his whole life believing himself to be an elf. Brought up by Santa (Edward Asner) and his elves at the North Pole, Buddy has spent the last 30 years happily working in Santa's toy workshop. But when his ungainly size starts to become a liability in the elf-sized working environment, Santa suggests that Buddy head to New York City to find his biological father (James Caan). Needless to say, the unlikely spectacle of a 6'5' man dressed from head to foot in bright green stands out a mile on the streets of the Big Apple, and the good-natured Buddy finds himself in all sorts of scrapes as he gets used to his new family and surroundings - and they get used to him. How CAN Santa deliver billions of presents to the whole world in just one night? With an army of one million combat-style Field Elves and a vast, state-of-the-art control center under the ice of the North Pole! So how could this incredible operation have MISSED one child?! To Santa's young son, Arthur, it threatens to end the magic of Christmas. With retired Grandsanta, a rebellious young elf, an old sleigh and some untrained reindeer, Arthur sets out in a crazy mission to deliver the last present! Deck the halls with excitement, fun and wonder in this new Christmas classic. Two separate stories mesh - in the first, a young music teacher, Maggie Andrews, begins dying of a heart condition and her son Nathan tries to get a pair of Christmas shoes for her before she dies. In the second, lawyer Robert Layton and his wife Kate are slowly drifting apart and the matter comes to a head during Christmas when Kate takes over for Maggie for the school choir and declines a job in Robert's firm. When Robert's mother passes away, he begins to reconsider things and his and Nathan's paths cross on Christmas Eve as Nathan tries to raise the money for the shoes and Robert tries to get a present for his daughter. In the winter of 1944, American soldiers led by Will Knott (Ethan Hawke) are assigned to capture a small squad of German soldiers posted in France's Ardennes forest. Tired of war, the Americans have already lost half their division and discover that their German enemy is equally unwilling to fight. With Jewish soldier Stan Shutzer (Arye Gross) interpreting, the Germans and Americans agree on a plan that will let the former surrender without violence -- but then, tragedy strikes. Smurf the halls! It's Christmas time in Smurf Village! 'Tis the season that brings joy to all the Smurfs...except one: Grouchy Smurf. When Grouchy Smurf says "Bah-Humbug" to the Christmas spirit, it's up to Papa Smurf's magic potion and three enchanted Smurfs to set things right. Can the Smurfs of Christmas Past, Present and Future teach Grouchy the real meaning of Christmas before Smurf Village falls into the hands of the evil Gargamel? It's an all-new fun and heart-warming A Christmas Carol like you've never seen! The holiday season is in full swing when a cultured gentlemen with twinkling eyes, and ample belly, and a snowy beard is hired as Macy's department store Santa. He claims his name is Kris Kringle, and soon fills everyone with Christmas spirit - except for his boss, Doris Walker, who's raising her daughter Susan to not believe in Santa but when Kris is declared insane and put on trail everyone's faith is put to the test as old and young alike face the age old question: Do you believe in Santa Claus? New York City policeman John McClane (Bruce Willis) is visiting his estranged wife (Bonnie Bedelia) and two daughters on Christmas Eve. He joins her at a holiday party in the headquarters of the Japanese-owned business she works for. But the festivities are interrupted by a group of terrorists who take over the exclusive high-rise, and everyone in it. Very soon McClane realizes that there's no one to save the hostages -- but him. Jim Hardy and Ted Hanover have been vaudeville partners for many years but when Ted announces that he and Jim's girlfriend, dancer Lila Dixon, are going to set off on their own, Jim decides the time has come to retire. He buys himself a farmhouse in New England and settles into the country life but soon realizes that he has an opportunity to do something special. He decides to open his inn to the public, but only on major holidays. Things are going well for him until his old partner Ted shows up and sets his sights on Jim's new friend, Linda Mason. The film introduced the song White Christmas. A young George Bailey, overwhelmed by family obligations and a sense of responsibility toward his community, feels tied down to a company he never had an interest in working for, and a life he never wanted to live. As he ages, he sees his youth, dreams and opportunities pass him by. Unknown to George, all of his friends and family have been praying for him to get through those hard times. Told through the point of view of a group of angels, he is met by his guardian angel Clarence, as he contemplates ending his life.