Copying is a very basic skill you must obtain in the digital era because you can obtain a huge amount of useful information without any payment via various media resources. However, you are not permitted to copy the multimedia content, for example, Blu-ray to another new disc or to other portable devices because of Cinavia protection. Have you ever encountered a "Copying stopped" situation while copying Blu-ray content in your life? It is possible that the failure may be resulted from the Cinavia protection. For your further information, let's have a deeper discussion on this topic.

Cinavia is an advanced anti-piracy technology that embeds audios, watermarks, etc., into the sounds and pictures, thereby giving you an inaudible viewing experience, as well as a watermark which will distract the viewing experience. Even if you use an external recording or if you try re-encoding, Cinavia-generated anti-piracy measures cannot be eliminated. Cinavia will embed certain protecting information in the sound of the film, such as embedding specific cinema-only information in the theater, and it also embeds information that is only available for Blu-ray Discs on them. Today, Cinavia is widely used in all Blu-ray movies and Blu-ray players. Therefore, if you are trying to copy the content from some protected Blu-ray content, what you need to do is to seek the permission of the copyright from the owner, so that you can copy the content smoothly. Part 2: What Would Happen When You Try to Copy Cinavia-protected Blu-ray

In detail, when you try to copy Cinavia-protected Blu-ray, if you have not obtained the copyright owner's permission, you will receive some specific messages on the screen in the Blu-ray playback. General speaking, you may encounter the following 4 types of messages on the screen related to Cinavia protection.

Message Code 1: Playback stopped. On the screen, you may come to see the message on the screen that "Playback stopped. The content being played is protected by Cinavia™ and is not authorized for playback on this device. For more information, see https://www.cinavia.com. Message Code 1". This means the video you are playing contains Cinavia watermark. The movie you are playing is intended only for presentation using professional equipment only and is not authorized for playback by public consumers.

Message Code 2: Copying stopped. If you are copying some Blu-ray content, you may see the message on the screen showing that "Copying stopped. The content being copied is protected by Cinavia™ and is not authorized for copying from this device. Absolutely, if you see this message, then it means you are copying some content that has been protected with the Cinavia protection. You can only be allowed to copy the content with the permission of its copyright owner. Or, you can use some additional professional Cinavia removal tools to copy the content successfully.

Message Code 3: Audio muted.In terms of copying audio contents, you may also see the message saying that "Audio outputs temporarily muted. Do not adjust the playback volume. The content being played is protected by Cinavia™ and is not authorized for playback on this device. The message shows that the audio you are playing is an unauthorized copy of professionally-produced content.

Nowadays, many Blu-ray movies are protected to prevent illegal and commercial uses. you may be possible to encounter the above three Cinavia code messages, warning that the contents you are playing or copying are fully protected and you are not allowed to copy them unless you have obtained the copyright owner’s permission. However, are there any ways to remove the Cinavia protection on the Blu-ray discs? Of course, the solutions can be provided with the help of some professional tools.

Apart from Cinavia protection, it can be able to remove other protections, including AACS, BD+ and MKB. With the help of Leawo Blu-ray Cinavia Removal, the copying will no longer be stopped and the playback won't be muted once the watermark has been removed for eternity so that you can easily get a Cinavia-free copy of the original Blu-ray file. The Cinavia-free Blu-ray content can be played on various devices based on your own preferences. Besides, due to the help of Intel Quick Sync GPU technology, you can enjoy the very fast removal speed. At the same time, it's simple and intuitive interface makes the removal process much easier.

Part 4: How to Remove Cinavia Protection from Blu-ray with Ease

We came to know that in order to remove Cinavia protection with ease, therefore, a third-party Cinavia removal program has to be adopted so as to obtain a complete Cinavia-free Blu-ray disc. Referring to the above introduction, the next thing you need to focus is to follow the next steps to remove the Cinavia protection from Blu-ray discs completely. For the details, please refer to the following parts.

Download Leawo Prof. Media and install it on your computer. When the download is finished, open the software to enter the main interface. Click on the tab of "Cinavia" to enter the Cinavia removal interface. After the movie is imported, you are allowed to set the "Disc type", "Copy mode (Full Movie and Main Movie)", "Subtitle and Audio track". You can adjust relevant parameters based on your personal needs. Click the big green "Cinavia" button on the top-right corner to call out backup setting panel. Before you start the Cinavia removing process, select the "Copy to", "Disc Label" and "Save to" options. If you prefer to copy the Blu-ray content to your computer's hard drive, then you can take a tick before "ISO". Then click on the "Start" button and the Cinavia removing process will begin. 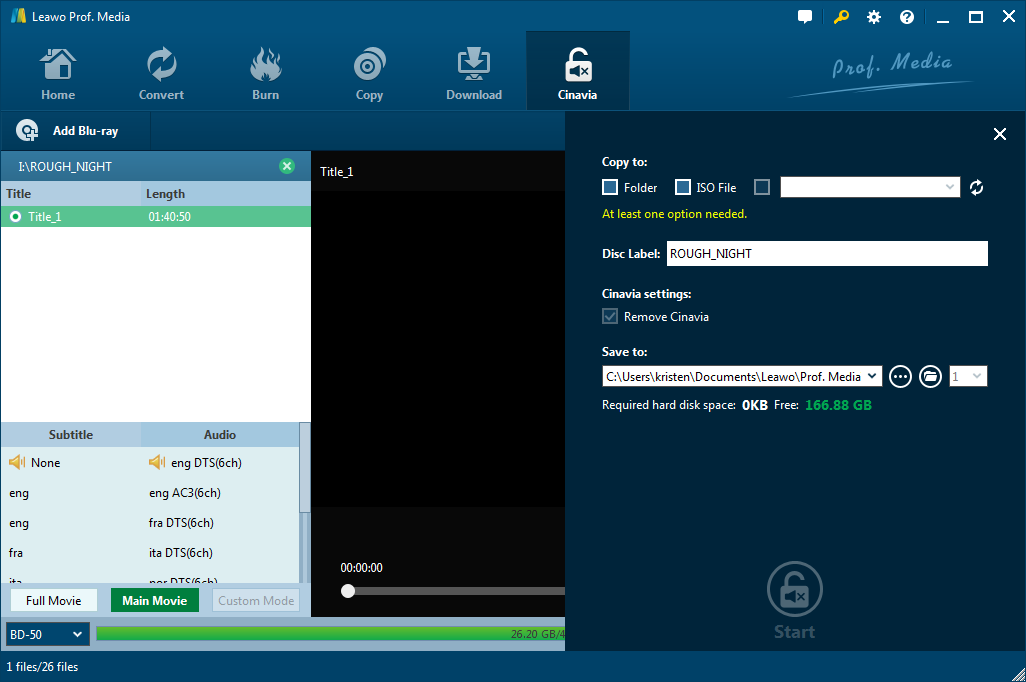 All you need to do now is waiting for a couple of minutes. Leawo Blu-ray Cinavia Removal is removing the watermark by getting a copy without Cinavia protection. It also allows you to copy a Blu-ray disc to another blank disc while you only have one CD-ROM. You can first save the Blu-ray disc content to your computer and then copy the disc backup to a blank disc. 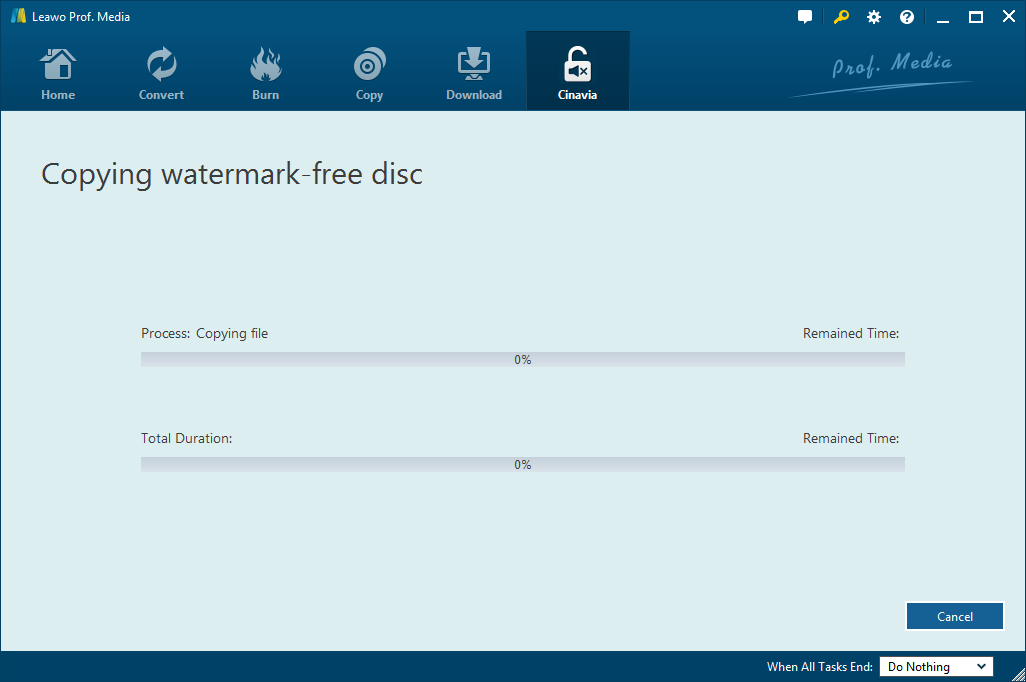 Part 5: Other 2 Programs to Detect Cinavia

There are also alternative software tools that can help you to get rid of Cinavia protection. You can make use of CinEx HD, or AnyDVD.

According to the distributor of the software, CinEx HD allows you to remove Cinavia from original Blu-ray. It can also allow you to remove the protection from already copied, ripped or downloaded Blu-ray files. CinEx HD will create a copy of your selected source without changing the video. One of the biggest advantages of the software is an intuitive design, which is perfect for novice users. However, we think it is severely limited for several reasons. First, it is only available as a trial for Windows computers, and it has been a while since the software was last updated. Perhaps its biggest disadvantage is the fact that it will require you to download a database for the movie that encounters Cinavia error, which means it is reliant on the internet. Sometimes you may also fail to fetch the databases if they are not available from its servers. Some users have also reported that the audio gets degraded, and the software cannot remove other DVD/Blu-ray protections. It is available as a free trial from the developer, and you will need to purchase a license for use. AnyDVD is a Windows tool that removes restrictions from DVD and Blu-ray media automatically in the background. AnyDVD also optionally disables RPC region codes, thereby making the movie region free and comfortably viewable on any DVD/Blu-ray Player. Before AnyDVD’s parent company changed to RedFox from Slysoft, users could bypass copy restrictions as well as bypass Cinavia protection but that has since changed. In fact, many users are reportedly encountering Cinavia removal errors. In fact, they will need the aid of CloneBD to remove it completely from Blu-ray Discs, with no way to remove it from DVD discs. Moreover, the software will downgrade the audio to AC3, not the original audio signal. Just like CinEx HD, it is available as a limited trial, with a full license obtainable after making the payment. If you regularly encounter problems while trying to copy or clone your Blu-ray movies, then it is almost always the Cinavia protection measures that the owner of the content has put in place. The good thing is with Leawo Blu-ray Cinavia Removal, you can bypass these restrictions. You can also make use of CinexHD, or AnyDVD for the same purpose, but those software tools have their own limitations and they are not as advanced as Leawo Blu-ray Cinavia Removal.