People's requirements for movies are getting higher and higher. They would like to enjoy movies with a vivid and lifelike image. It seems to be self-evident that 3D movies have formed an important factor when the audience are considering which movies to watch. So the movie technology is upgrading dramatically for satisfying the audience watching demand. 3D movies take up a great deal of visual market than 2D compared with before. Let us get more details about this tutorial.

How to Burn Blu-ray 3D Movies

When it comes to watching a movie in the comforts of your own home you want to ensure you are getting the best viewing experience possible. You want to become completely immersed in the film which makes you feel like you are involved in what's behind the screen. But, what films will give you the experience you are looking for?

Stereoscopic 3D film means the two images are superimposed to produce a three-dimensional effect with resolution up to 1080P. When the audience puts on stereoscopic glasses to watch the film, this could offer the audience with an immersive and more real watching feeling. And this effect gives a much better visual experience. It offers more depth than that of other movies without 3D effect. The impressive masterpiece has been made as 3D Blu-ray release in 2023. Having said that, Douglas Sirk has brought the western adventure Taza, Son of Cochise to the big 3-D Screen together with Rock Hudson, Rex Reason, and Barbara Rush. The immersive video enjoyment will totally make you scream again.

The thrilling 3D Rarities will be presented in the films and images that have been meticulously aligned shot-by-shot for precise registration of the original left/right elements. It is definitely worth for watching one more time.

△ 3. The Sword of Granada

As a traditional and heated topic of treasure seeking storyline, The Sword of Granada is now available in 3D Blu-ray release which will appear to be more exciting and thrilling for viewers to watch. This 3D Blu-ray release will be worth the time to explore a little bit oriental mystery and viewers will follow the stunner about how a quest to find a missing woman from his past. It is a good choice to kill the time with enjoyment. This 3D Blu-ray movie will make you laugh with pure happiness. Its fun energy has touched us deeply throughout the entire movie. In this Blu-ray release, we will be told when the Queen of the Hard Rock Trolls tries to take over all the Troll kingdoms, Queen Poppy and her friends try different ways to save all the Trolls.

If you are a big fan of Pixar movies, Secret Life of Cars 3 released in 3D Blu-ray movie will be your choice. The new 3D Blu-ray release will be completely re-rendered in 3D, high resolution, and the audio was completely redone in surround sound. You will get an incredible viewing experience soon.

A Christmas carol is a fantasy family movie directed by Robert Zemeckis and released in the United States based on Charles Dickens' novel A Christmas carol, the film tells the story of ebenezer scrooge, a mean and cruel man who is transformed from a miser into a good Samaritan by the amazing events of Christmas. It is one of the top best 3D movies to watch on 3D TVs that deliver heart-pounding and entrancing 3D visual effects. Three of the world's greatest storytellers: Roald Dahl, Walt Disney and Steven Spielberg join hands to present one of the best 3D movies. The boldly shot scenes in 3D capture the 3-dimensional world in all its glory. A wise choice to watch the 3D movie full for 3D TV, PC/Mac with kids & families. The Marvel action blockbuster is widely considered good works of 3D effects. And Captain America: Civil War is no exception. The incredible fighting scenes will get all audience excited. For those who have been big fans of Marvel series, they will definitely not miss this movie in 3D effect. Action movie The Jungle Book sets another good example of in the 3D field. The darkness in the jungle and savage animals look so real under 3D IMAX effect that the audience may feel they were also in this dangerous world. This movie is also considered one of the best Blu-ray movies in 3D. Actually, in addition to Blu-ray, you can also download these 3D movies to computer in digital format. Therefore, you need a movie downloader. As the best movie downloader, CleverGet Video Downloader can help you download movies from more than 1000 websites, such as YouTube, Soap2Day, FMovies, etc. In terms of download quality, it supports up to 8K resolution video and 320 Kbps audio. What's more, with other modules bundled, you can also download movies from Netflix, HBO Max, Hulu, and other subscription-based platforms. Plus, with the support of batch download and playlist download, it helps you download movies in batch at 6x higher speed. Now, let's check out the detailed steps of how to download 3D Blu-ray movies with CleverGet Video Downloader.

Download and install CleverGet Video Downloader from the link below.

Copy and paste the URL of the target 3D Blu-ray movie into the address bar and press "Enter" to open the page. CleverGet will automatically parse the movie. 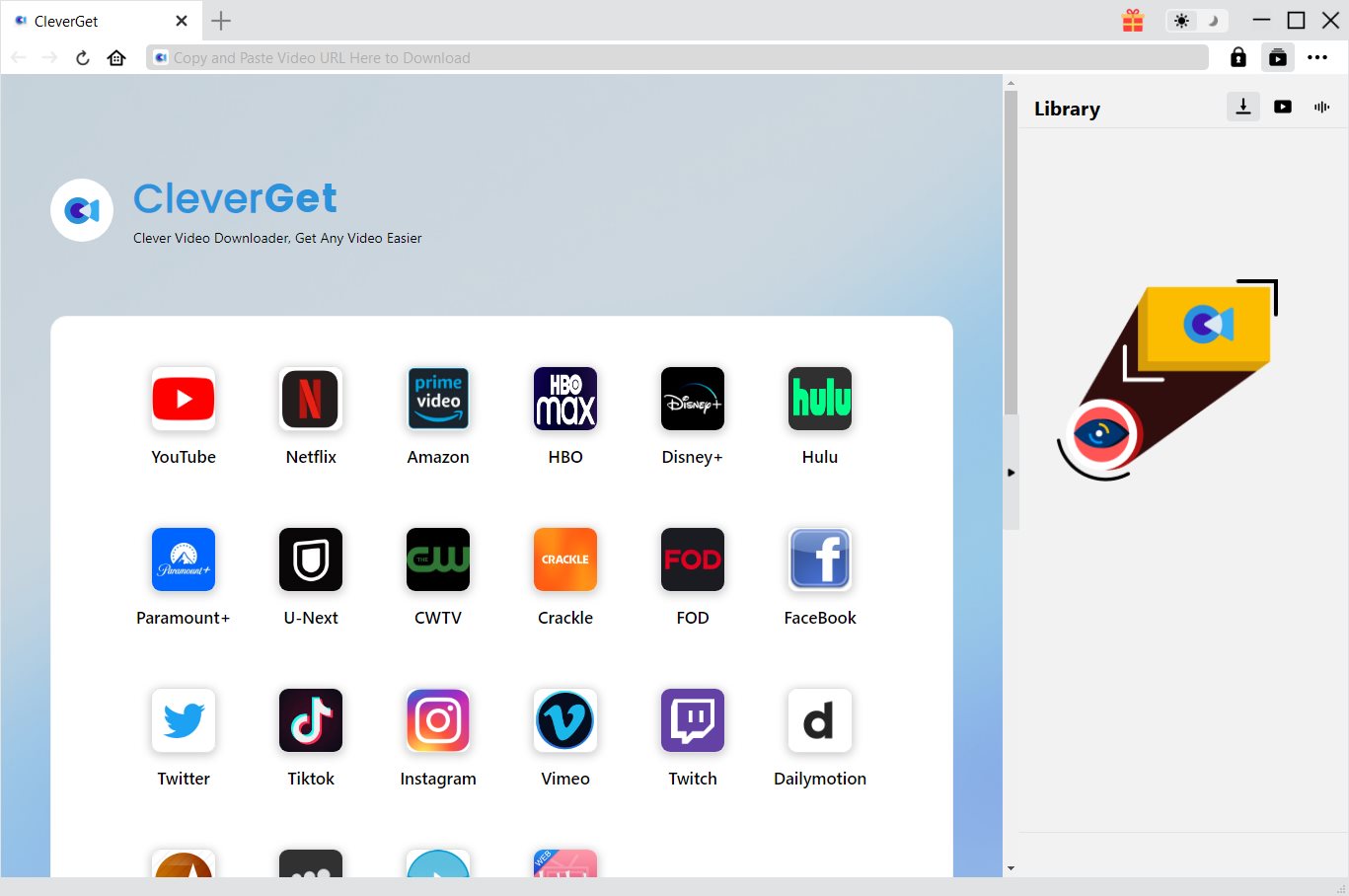 The software detects all available sources and lists all downloadable options in a pop-up download panel in different formats, sizes and resolutions. You just need to select the desired option and click the "Download" button to download the 3D movie. In addition, you can check and manage downloads in the "Library" sidebar on the right. 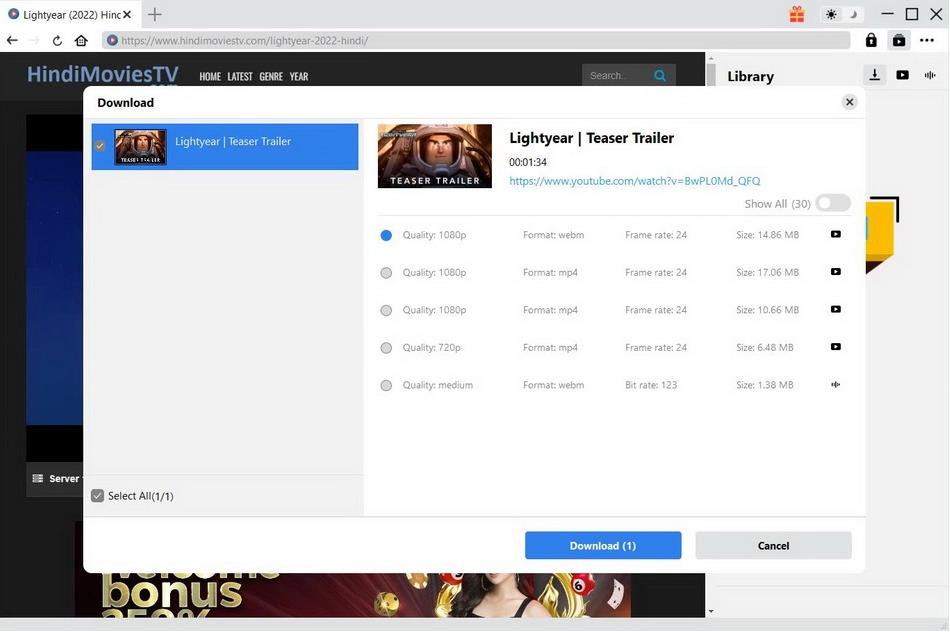 This player is capable of playing 3D videos but at the same time it supports other multiple video formats and can also handle basic 2D to 3D conversions. There are so many clean, impressive and user friendly features that this software can offer for users, with a large 3D playback button at bottom of the screen. This player can also display high quality pictures whereas the super easy interface makes playback buttons easy to approach. It also contains a basic editor tool that can be used for some basic needs like zooming and cropping. You will definitely love to add watermarks to your videos to make it a customized one using 3D Vision Video Player copyright options. This super easy freeware video player supports all popular file formats and also makes 2D movie playbacks more interesting. KM Player can also do conversion from 2D video to 3D video by simply adding a few anaglyph effects to content; so you can enjoy great quality with 3D glasses. It also allows users to customize their playback interface including skins and one can also add albums art to make their audio recordings more interesting. Using KM platform, you can easily share your videos on cloud with one click. This is a well-known open source 3D video player; you can definitely access it for free with all unique features. Currently VLC is being used by most of window users and it can play almost any video file format along with DVD support and is capable of handling live streaming. The only drawback is that it cannot play Blu-ray discs. Its fancy navigation screen will assist you with easy controls and you can also enjoy some basic video editing like rotating and cropping. For users pursuing extraordinary image and audio quality such as watching 4K Blu-ray movies, Leawo Free Blu-ray Player is a very easy to use Blu-ray media playback software which not only provides comprehensive solutions for you to play back Blu-ray, DVD, ISO files, common video, HD video and audio files on Windows PC smoothly. With this player, you could watch movies with quality-lossless image and high-quality audio. It's a region-free players for all Blu-ray disc playbacks.

Related: How to Convert 2D Movies into 3D

Step 1. Add 2D videos into the Leawo video converter. Or directly drag MP4 videos into the program. And you can play back loaded videos, select subtitle and audio tracks, etc Step 2. After adding the source MP4 videos, choose the MP4 videos and click the "Edit" option on the right side. Select "3D" tab to set 3D effect. Adjust 3D Depth if necessary. Click "OK" button to save. Step 3. After setting the 3D effect, click "OK" button to return to the main interface. You could keep the final 3D movie in original format or convert it to other formats for diverse devices. Step 4. At last, click the big green "Convert" button. On the following popup window, set output directory and then click the bottom "Convert". Then you can get the 3D movie for your own enjoyment.