How to Play PowerPoint on TV

If you happen to have the same question as above ones, don't worry. You could learn different ways on how to play PowerPoint slideshow on TV to present your slideshows smoothly on TV. The below methods are all effective ones to help you view PowerPoint on TV, some of which are even free of charge.

Nowadays, many mobile devices like Android and iPad tablets also support HDMI to TV connectivity. Therefore, you could try to play PowerPoint on TV via HDMI cable from your mobile devices as well.

Other reasons to choose Leawo PowerPoint to Video Pro:

The below steps would show you how to convert PowerPoint to video and then play PowerPoint video on TV:

Part 3: Burn PowerPoint to DVD for Playback on TV

If you have a DVD player, you could play PowerPoint on TV with DVD player by converting and burning PowerPoint to DVD disc. While this method is more laborious than the aforementioned, it is a pretty functional method. What you need to prepare include: PowerPoint to DVD burner software, DVD recorder drive (most computers would have already), blank writable DVD disc, and your DVD player at work. ☉ Convert PowerPoint to video and audio in 180+ formats.

☉ Convert up to 12 PowerPoint files in batch processing 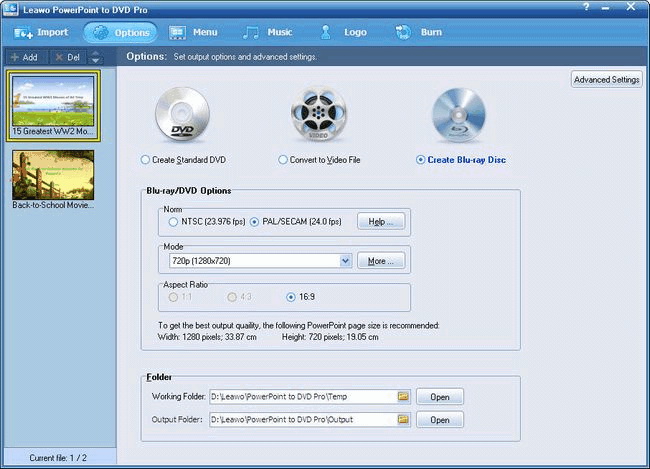 Last but not least, you can use a video streaming device like Roku 3, Apple TV or Google Chromecast to play a slideshow (e.g. one that has been converted to video format). The below image shows connectivity options for Apple TV. The various connectivity options in a video streaming device such as HDMI, USB and Wi-Fi / Ethernet provide ample scope for streaming various file types to your TV. This makes it possible to run an image, video or PPT/PPTX slideshow of your presentation slides (depending upon the mode of connectivity).