Another audio recording software for Mac is QuickTime Player. Just as you know, it is not only the default DVD player on Mac system, but also can be used as an excellent audio recorder to record all kinds of online or offline streaming audio resources even though it has many limits. Users are allowed to record both internal microphone and external system audio with the great quality. The recording length could be showed on the screen while recording the audio on Mac and it allows users to export the recordings to MPEG-4 format. Audacity is a free cross-platform, including Mac OS X audio editor program which can allow users to record, play, input and output WAB, AIFF, Ogg Vorbis and MP3 files, and support most of the commonly used tools, such as cropping, pasting, mixing, up/down, and special effects for voice change. You can cut, copy and paste (with unconstrained cancellation), mix audio tracks, and add effects to recordings. It also has a built-in package editor, a user-definable sound spectrum template and a frequency analysis window for audio analysis. The built-in editing, copying, mixing and special effects functions can meet the general needs of editing requirements. By the way, it also supports VST and LADSPA plug-in effects. GarageBand is an entry-level music production software made by Apple for users of iPhone series products in 2004. Actually, GarageBand is more than an audio recorder. On Mac, GarageBand outweighs other recorders on its simple user interface and simple recording process without any complications. Also, the audio tracks would be edited in various effects due to the built-in audio filters, including distortion, reverb, echo and so on. Furthermore, GarageBand also provides the studio-quality range of musical instruments effects. If you don’t want to download any other programs, this Mad default audio recorder can be your choice. 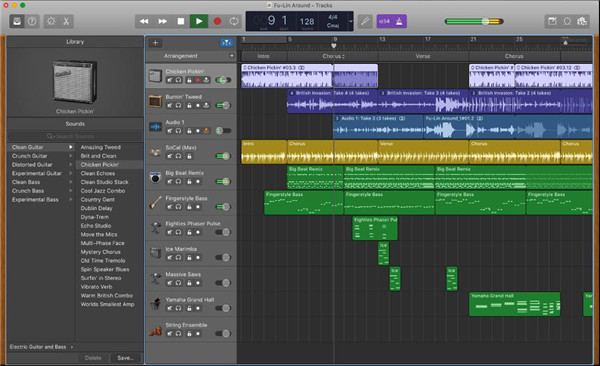 Another open-source DAW audio recording software for Mac you can depend on is Ardour. This recorder could be compatible with various operating systems, including Mac, Windows as well as Linux. One of the most advanced features for Ardour is the multi-track recording function which could import the video for file scoring as well as recording and editing at the same time, which aims to prepare any combination of individual tracks for recording. However, this software doesn’t support additional built-in effects or instruments. Macsome Audio Recorder is another powerful audio recorder for Mac which can easily record all kinds of different sources, including internal microphone, external system audio and other external apps on Mac. Even though it doesn’t have the dynamic interface, it is also quite welcomed by the public due to its convenience on the handling of recording on the speech, music or podcast in 3 modes. By the way, for the better grouping, it allows uses to edit ID tags which provides more details about the recordings. Another excellent audio recording software for Mac is iMusic. You can enjoy this program for free. No matter you have the preferences for songs, comedy TV shows or podcasts, iMusic can be capable of recording these resources without any quality losses. If you don’t tag these files, iMusic can also differentiate tracks when it finishes the recording. Instead, it can tag the audio files based on the artist, album name and song name which could be helpful in the future if you would create a playlist of the recorded audios. Furthermore, if you prefer the quality settings, iMusic allows you to modify the related settings based on your needs. Audio Hijack Pro is a Mac recording software which can record the audio stream from the Internet, import the recorded audio sound, or grab the sound of the DVD audio disc. The recorded content can be saved as ALAC or AAC files, or MP3, AIFF format, and can be directly burned to CD, supporting VST/AU plug-in effects. Compared with general recording software, Audio Hijack Pro can mix multiple audio sources during recording to achieve a better final effect and reduce post-editing. AudioNote is a recording software for Mac which combines the notepad function. You can record your voice into notes and audio and this voice recorder could easily improve the quality of your notes and will also save your time by the way. By synchronizing notes and audio, AudioNote automatically indexes your meetings, lectures or classes. With AudioNote, there is no need to waste time searching the entire recording to find out. Each note acts as a direct link to its recorded point, taking you instantly what you want to hear. Part 2: How to Record Audio on Mac with the Best Audio Recording Software for Mac?

Download and install this Mac audio recorder on your computer and then launch it. Step 4. Start to record audio on Mac with the best audio recording software for Mac

After the above settings, click the "OK" button to return to the main interface. Then click the red "Start" button to start recording before you activate your audio file or input voice/sound through microphone. Stop at any point you want by clicking the red button again. Leawo Music Recorder is able to automatically download and add music tags if you're recording music on Mac. Also, it enables you to adjust audio tags by entering "Library > All Recordings" to choose the audio recording and right click it to select "Edit Music Tags" option. You could change audio tags like recording title, artist, and genre.