What's more, the internal burner lets you burn PowerPoint files to DVD/Blu-ray content. The internal smart DVD menu editor creates wonderful DVD menus for manually or automatically quick navigating when playing on TV with a DVD/Blu-ray player. This PowerPoint to DVD converter is one of the few that support to convert PowerPoint to Blu-ray file. 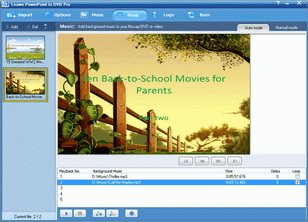 iSpring River integrates with PowerPoint as a tab right in the software, to help you convert your slideshows to MP4 format and upload directly to YouTube with a single click. The video file it creates is compatible with a variety of desktop and handheld devices (including Android devices) and both Windows and Mac operating systems.

River is useful for teachers and trainers in the education and corporate sectors to convert even the most complex PowerPoint presentations to crystal-clear 1080p HD format for instant one-click publishing to YouTube right from the interface. Camtasia Studio has a PPT to video converter app built in with 30-day free trial. If you want to convert PPT only for a short period of time, say for some project or assignment and don't want to buy a software just for this, you can always try Camtasia Studio. This comes with a free 30-day trial and the final video output is watermark free. Why buy a software when you have to convert only one or two PPTs? I always make my videos using Camtasia because it has the wonderful editing option. It also helps to add watermark to your video, cool transitions and callouts. If you are like me who regularly makes screencasts also, Camtasia is a must buy for you. E.M. Free Powerpoint Video Converter is free and easy to use PowerPoint (PPT) to video conversion tool. It has simple and easy to use user interface. Just add the file you want to convert to video and select the video format like WMV, AVI, MPG or audio format MP3 or image format BMP for free. Now click on convert button to start the process. It is a lightweight application.

Note: It does not support Office 2013 PowerPoint.