Thanksgiving is such a nice festival that you get to reunite with your lovely family. Here's how it goes, after a comfort Thanksgiving turkey meal, it's time to curl up on the couch with your loved ones and spend the time together. The best way to enjoy the thankful feeling and satisfying sense of gratitude is to watch a nice movie together. If you are looking for feel-good movies to watch with your family, check out this guide of Thanksgiving movie releases.

There's so much to do in the holidays, among which, spending time with your loved ones is the most important thing. If you want to enjoy a family-friendly movie together, here's the list of Thanksgiving movie releases in 2023.

Starring Tom Cruise, this is the seventh entry of the Mission Impossible franchise. Ethan Hunt, the IMF agent, is still the King of running fast, who continues his adventure along with Ilsa Faust, played by Rebecca Ferguson, who is confirmed to return in the seventh installment. Mission: Impossible 7 is delayed in theatrically release due to the pandemic, and is released on November 19, 2021. It will be available to stream on Paramount+ 45 days after its theatrical debut, which is one of the Thanksgiving movie releases that is worth watching.

Encanto is a forthcoming computer-animated musical fantasy movie produced by Walt Disney Pictures and Walt Disney Animation Studios. Encanto is the tale of a family in Columbia that possesses extraordinary magical powers. However, the young girl, Mirabel, the only ordinary child without the blessing of super-strength, turns out to be the last hope when everyone is in danger. Encanto is released in the cinema in the United States on November 24, 2021. One of the best Thanksgiving movie releases to enjoy with your lovely family.

Directed by Ridley Scott, House of Gucci is an upcoming American crime movie. Adapted from the same-name novel by Sara Gay Forden, it's a tale of murder and madness. The movie stars Lady Gaga in the role of Patrizia Reggiani, who was orchestrated to assassinate her ex-husband, the head of Gucci fashion House, Maurizio Gucci played by Adam Driver. Al Pacino and Jared Leto also contribute to the movie. The film is released in the United States on November 24, 2021, as part of the Thanksgiving movie releases.

Directed by Jason Reitman, Ghostbusters: Afterlife is the spin-off and the third installment of the Ghostbuster franchise. Set 30 years after the second sequel in 1984, the film follows a single mom and her two kids arrive in a small town, where they discover their connection to the original Ghostbuster and the secret behind their grandfather. Ghostbusters: Afterlife is released in the United States on November 11, 2021, a good choice of Thanksgiving movie releases.

Directed by Chloé Zhao, The Eternals is an upcoming American superhero movie produced by Marvel Studios. Starring Angelina Jolie, the movie is based on the Marvel Comics of the same name, which documents the race of immortal beings who shaped history and civilization, reunite after hiding for thousands of years, to protect the earth from the enemy. As part of phase four of the Marvel cinematic universe, The Eternals is released in cinema on November 5, 2021. The latest Marvel movie of Thanksgiving movie releases.

Directed by Walt Becker, Clifford the Big Red Dog is the tale of a tiny puppy named Clifford, who grows up to enormous size because of the love of its owner, a little girl. The movie is an adaptation of the children's book series of the same name by Norman Bridwell. Clifford the Big Red Dog is released in the cinema in RealD 3D, Dolby Cinema, and IMAX on November 5, 2021, by Paramount Pictures. It's one of the best Thanksgiving movie releases to enjoy with your family.

Directed by Gil Kenan, A Boy Called Christmas is a forthcoming British fantasy movie that is adapted from the same-name novel. The movie follows a young boy named Nikolas's adventure, including elements of snow, elves, and kidnapping. Even though with the name of Christmas, the movie is one of the Thanksgiving movie releases that is worth watching with your family. A Boy Called Christmas is released in November 2021 in the United Kingdom. It's the perfect holiday movie you don't want to miss.

Of all the movie theatres in the United States, AMC is probably the most popular one that is operating more than 300 locations across the country. AMC Movie theatres open during major holidays such as Thanksgiving, Christmas, and New Year's Day. So if you want to watch Thanksgiving movie releases, then AMC is the ideal one. If you have any questions regarding services, you will need to reach out to the customer service department by phone, email, or social media. If the ticket is sold out on AMC, you can turn to Harkins theatre for Thanksgiving movie releases. Owned and operated by its parent company, Harkins Enterprises, LLC, Harkins theatre is opened throughout Arizona, California, Colorado, and Oklahoma. Apart from these two, Landmark theatres are where you can look for the Thanksgiving movie releases as well. It's the largest specialized movie theatre chain in the United States that is mainly for independent and foreign films. Landmark has 46 theatres with 233 screens across the country, which is quite popular among a lot of moviegoers.


Part 3: What If There is No Ticket for Movie Theatres on Thanksgiving Day?

When everyone's going out to celebrate with Thanksgiving movie releases, movie tickets could be sold out very soon. Instead of going to the cinema, you can watch the Thanksgiving movie releases at home. Download them via CleverGet for offline access and enjoy them with your lovely family without worrying about the tickets. The downloader supports 1000+ video websites such as YouTube, Hulu, Vimeo, Facebook, and many more. With CleverGet, you can not only download the Daily Show on YouTube but also popular Hong Kong dramas to your computer.

Now let's see how to download the Thanksgiving movie releases with CleverGet. First of all, you will need to download this best movie downloader from the links above.

Before downloading movies, you can click the three-dot icon in the top-right corner, and choose the "Settings" option to set output directory in the Settings window for downloaded movies. 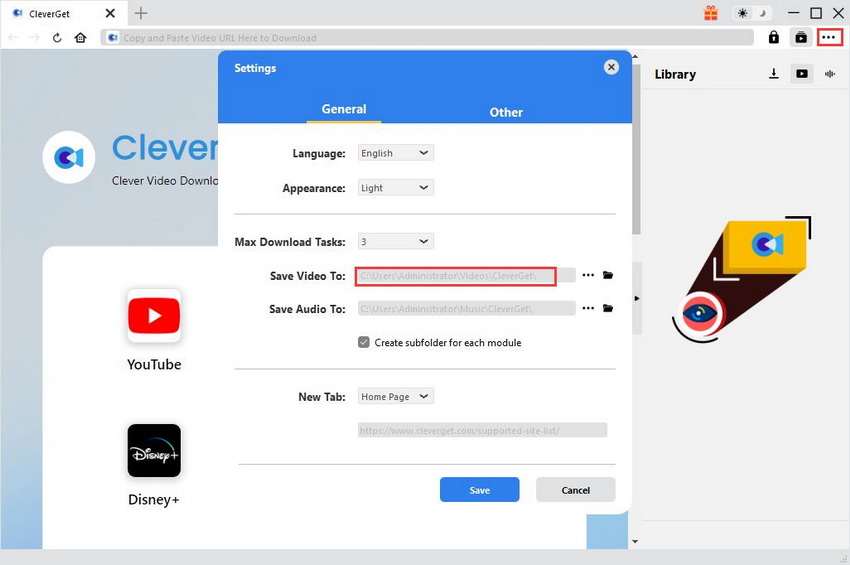 Step 2: Go to the link of source movie

On the main interface, you can click the corresponding icon that you want to download movies from. If it is not listed, you can directly copy and paste the source link into the address bar to visit the source video page. 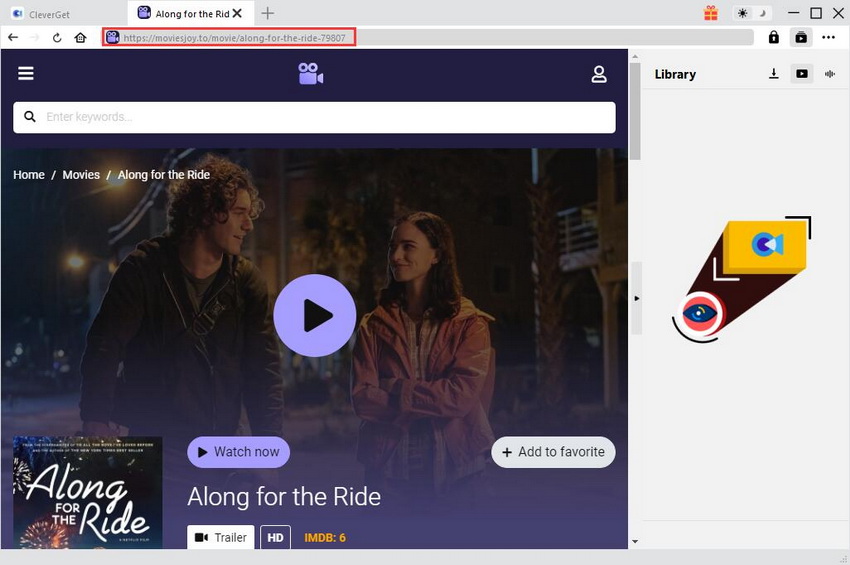 After detecting and parsing, all the downloadable sources of the movie will be listed in the pop-up "Download" window. And you can choose the ones you want to download according to your need. Then, click the "Download" button to start downloading Thanksgiving movies. 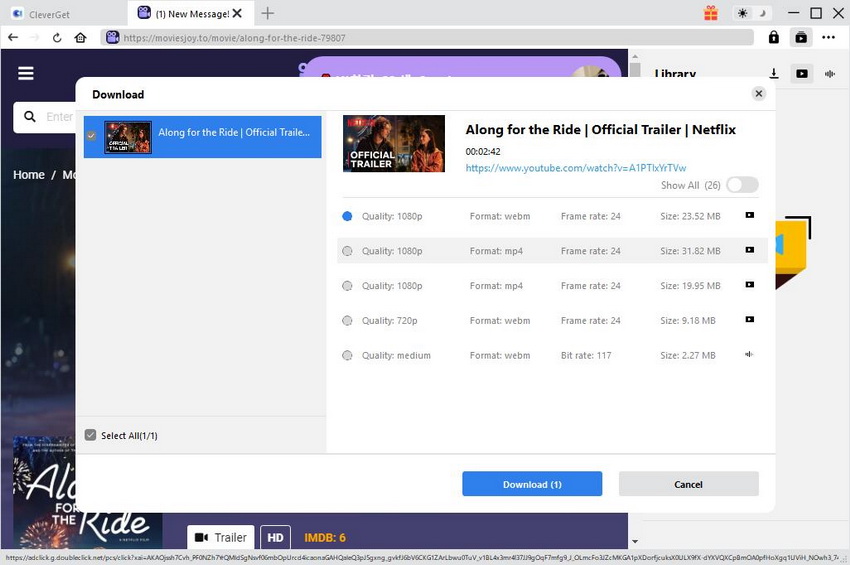 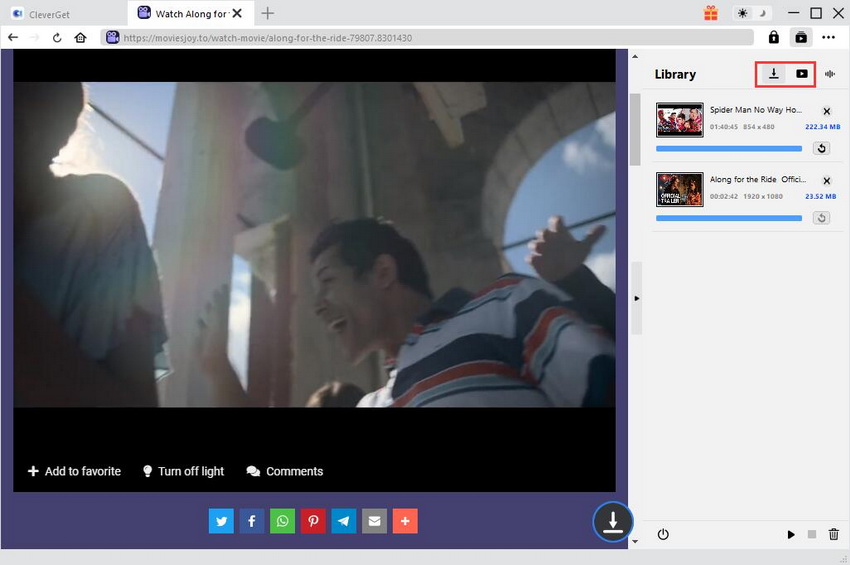 You can see Leawo Video Converter is a module of Leawo Prof. Media. Click the "Video Converter" on the main screen, or open the "Convert" module to enter the video converter module.

Click the "Add Video'' button to browse and add video files from the local drive. You can also simply drag and drop.

Next to the green"Convert" button on the right you can find "MP4 Video". Click the button and you'll see a drop-down menu, select the "Change" option to enter the "Profile" panel, this is where you can set the output format.


On the "Profile" panel, you can choose any format you like, from either "Format" or "Device".

After adjusting parameters, format, and video editing, click the big green "Convert" button to continue to the output directory setting.

Set output directory in the popup sidebar. Click "Agree" in the red notice, and click "Convert" to start Conversion.