If you have higher requirement on the sound quality of your music, the music player apps on your smartphones should not be the firm choice you should make. Instead, if you would like to obtain the hi-res music listening experiences, an MP3 player would be your first choice which could provide the best audio quality due to its advanced digital-to-analog converter and circuitry. Among various MP3 players, Sony Walkman MP3 player has to be mentioned here which is both affordable and superior on the sound quality. If you are simply looking for the best Sony Walkman MP3 player to get better listening experiences, the following comprehensive reviews related to the MP3 player should not be missed. Speaking of the Sony Walkman MP3 player, it is actually very long. It has been more than 30 years since Sony officially launched its first “Walkman-TPS-L2” on July 1, 1979 whose size is 88*133.5*29mm with the longest 8-hour playback time.

The wm-101 launched in 1985 can be said to have made outstanding contributions to Sony. It is the first time that it has a built-in chewing gum battery, which greatly increases the continuous playback time of the Walkman, and makes the Walkman more widely accepted by consumers. The following year, Sony launched the Walkman WM-109, which was the first Walkman with a remote control. In June of the same year, a total of 20 million Walkman units were sold. In 1990, Sony made persistent efforts to launch the first Walkman equipped with a wireless remote control-WM-805, and at the same time launched the DAT Walkman TCD-D3. 1994 was the 15th anniversary of the introduction of the Walkman by Sony. In order to commemorate the birth of the Walkman, Sony launched the 15th anniversary models WM-EX1 and WM-EX1HG, which became the most sold models in the Japanese market. In 1996, a Walkman with major changes in appearance that WM-EX5 appeared again. Its mirror design was called the most beautiful Walkman.

In 1999, marking the 20th anniversary of the invention of the Walkman, Sony launched the commemorative tape player WM-WE01. On October 22, 2010, Sony announced that it would no longer be producing the devices. Instead, Sony CD Walkman entered the world since then, and gradually, Walkman supports more and more digital formats. However Sony Walkman player comes to the end when Apple launched its iPod and music digital devices.

For the best budget Sony Walkman MP3 player, you have to mention A20. With the distinctive styling and refined materials, A20 is quite welcomed by the public. Actually A20 series include A25HN, A26HN and A27HN models. This player focuses on the sound quality and high-resolution. Audio-compatible Noise Cancelling mute distractions while bundled with the headphones. It could easily encode the playback of music using higher sampling rates. What’s worth mentioning is that it is equipped with the improved battery life, wide codec support as well as large storage capacity. You can also enjoy your infinite playlists when you add a new microSD card to it.

Sony NWZ-WS610 waterproof walkman headset is equipped with a remote control ring, which means you can control music more easily while exercising. This waterproof earphone is very light which can perfectly surround your head. It uses NFC and Bluetooth to connect to your music player, allowing you to enjoy exercise without having to deal with any entangled wires. Unlike other standard headsets, this headset is equipped with a ring device that allows you to maintain control while moving. This splash-proof remote control can be worn on your finger or wristband, and in any weather, you can easily change the track during exercise. Obviously, this device can also talk hands-free because it has a built-in microphone. You can download the SongPal application on your mobiles to manage your music intuitively. The appearance of WM1A and WM1Z are exactly the same, that is, the shell materials/colors are different. Unlike most of the top players on the market, Sony is not using the traditional Android system this time, but a deeply customized Linux system, so the UI and operating experience are novel and unique. On the basis of relatively smooth control, with a more humanized music selection system, it is convenient and comfortable to easily find music, adjust EQ, and switch frequency response and album covers. The right side of the fuselage is also equipped with Walkman blind operation buttons, which is very practical. Except that 1A has a slight advantage in terms of speed, the overall performance, including musicality, 1Z is much better, especially in terms of timbre. I don’t know if it is due to gilding. 1Z always fades out a touch of sweetness and luxury. NW-ZX500 is an upgraded model of NW-ZX300. It uses the same aluminum base as the flagship NW-WM1A, and it is combined with a non-magnetic, low-resistance, strong and thin aluminum back panel to ensure structural strength while effectively reducing resistance which can be able to achieve a transparent and distortion-free sound quality. This player is equipped with a copper-plated module bottom plate. Compared with the ZX300's copper-plated module, the volume is increased by about 3 times, achieving clear sound quality across the entire sound range. The DSEE HX digital sound enhancement engine used in the Sony NW-ZX500 series can repair high frequencies which could bring clear and beautiful sound at the end. According to the above introduction related to the history of Sony Walkman MP3 players and some representative models, there is one more thing needs to be declared that asides from ZX500 and A100 series, other player models could only be imported the MP3, FLAC or more lossless format like WMA files to the player for further playing. For the last two MP3 players, due to the adoption of more advanced operating systems, they could directly stream the music from other online music platforms. If the Sony Walkman MP3 player you have owned is only available to be imported the music files, then the following information below on how to download music free would quite be useful to you.

In order to download some preferred songs to your local computer from some music streaming services, like Spotify, you had better depend on a professional music recorder which could retain the original music without any losses. Different from other Windows default recording programs, professional audio recorder programs doesn't need any extra devices like outside speaker or microphone. Its built-in microphone is free from the noise outside, thus to improve the quality of the recordings. What's more, professional online audio recorder can also edit music tags like artist, album, album artwork, song name, and so on to recordings. Just launch the software and click the "Record" button before playing audio, and it will automatically record the audio you are playing. Users can pause or resume capturing process anytime.

Leawo Music Recorder is easy-to-use recording tool that allows you to record sounds in high sound quality. It has smart tools like Task Scheduler and Auto-filter, making you record any sound in an easy and quick way. It is definitely affordable and useful software for you. The following steps will take the best professional online audio recorder - Leawo Music Recorder as an example to show how to record music from other platforms with professional online audio recorder.

Click the "Audio Source" icon on the main interface to set audio source firstly. To record output sources, select "Record Computer Audio" option, and you can then record the audio in MP3 or WMA format. Click the red "Start" button to let this Music Recorder work. And then play other music streaming players that you want to record. It should be born in mind that you should first let this music recording software start recording and then play your source audio on other players. Click the button again to stop recording and save it in WAV format. In "Media > Library" tab, you can see all your recordings automatically filled with music tags. Manually editing is also available for this software. Select a recording and right click, then choose "Edit Music Tags" to manually edit music tags. Step 5: Import your Twitch recordings into the software

Once it is done, you can connect your walkman to your computer and add these downloaded WMA files to your Walkman. In the era of more and more popular large screen, Sony Walkman MP3 is also equipped with the same touch screen as the mobile phone. This makes it possible to watch videos on the Walkman. Obviously, if you can download songs, the same goes for videos. When it comes to downloading videos, CleverGet Video Downloader will be one of the best tools. As its name says, this is a video downloader that can download videos from any websites, including YouTube, Vevo, TikTok, and other 1000+ websites. Also, all videos can be saved in MP4 format - which is format friendly for most MP3s. If you're using the high-end Sony Walkman series, you don't have to worry about the sound quality of your downloaded videos either. Because this software can save up to 320 Kbps sound, which makes your Sony Walkman MP3 useful in the video field too. Let's see how to download videos free with this software.

Download and install this software by selecting the appropriate version from the link below according to your computer system. Once done, launch it.

If you have connected your Sony Walkman MP3 player to your computer, you can directly set the player's folder as the output directory. Click the three-dot icon and choose "Settings" option. In the pop-up window, click the "Save Video To" box to browse and select your MP3 as output directory for the downloaded videos. 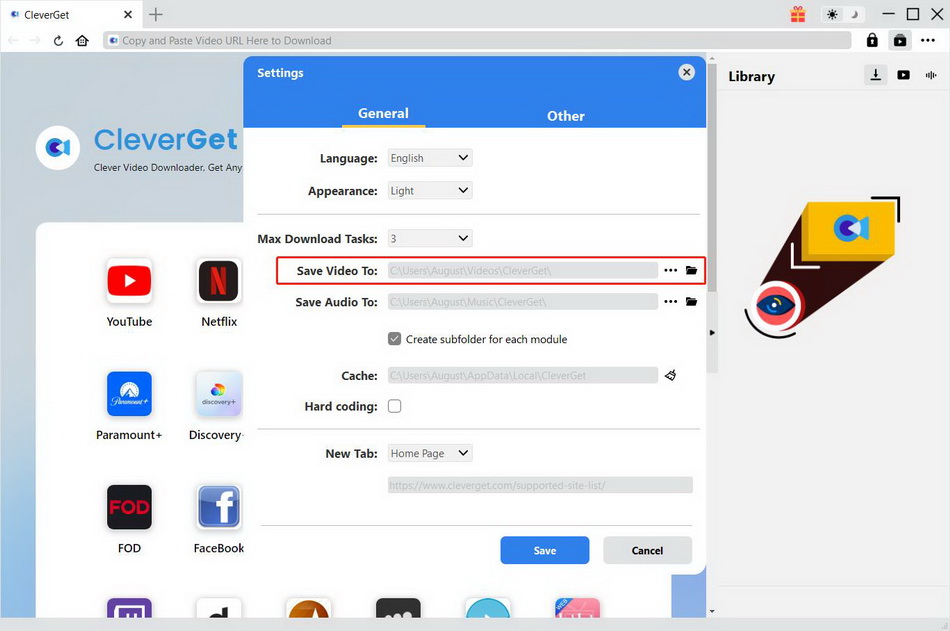 With the built-in browser, you can easily find the target video. Just input the link of the video you want to download into the address bar, and press the "Enter" key on your keyboard. 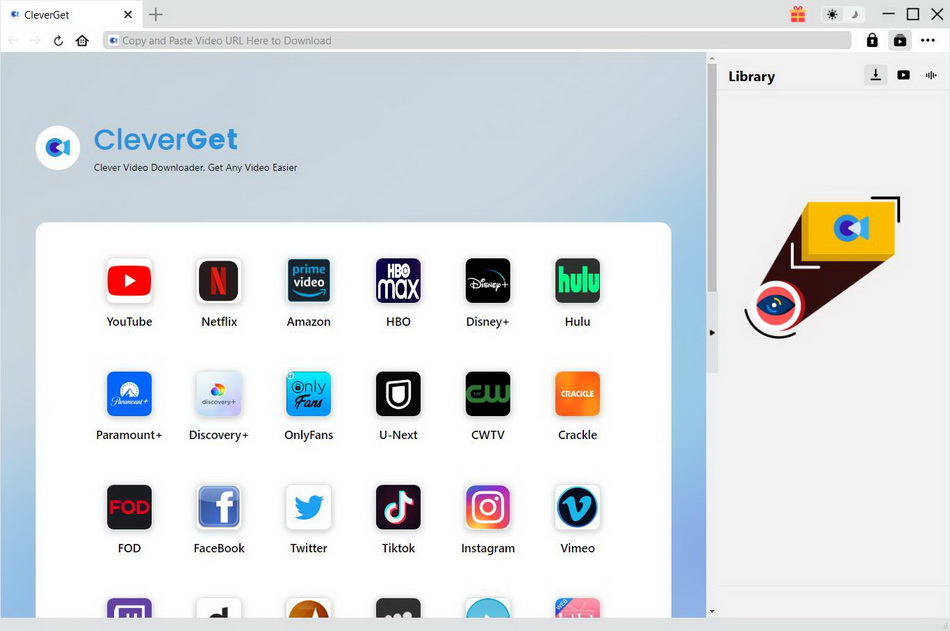 In the pop-up window, all available videos and audios will be listed in different sizes, qualities and formats. You can select one or more options as needed and click the "Download" button to let the program run. 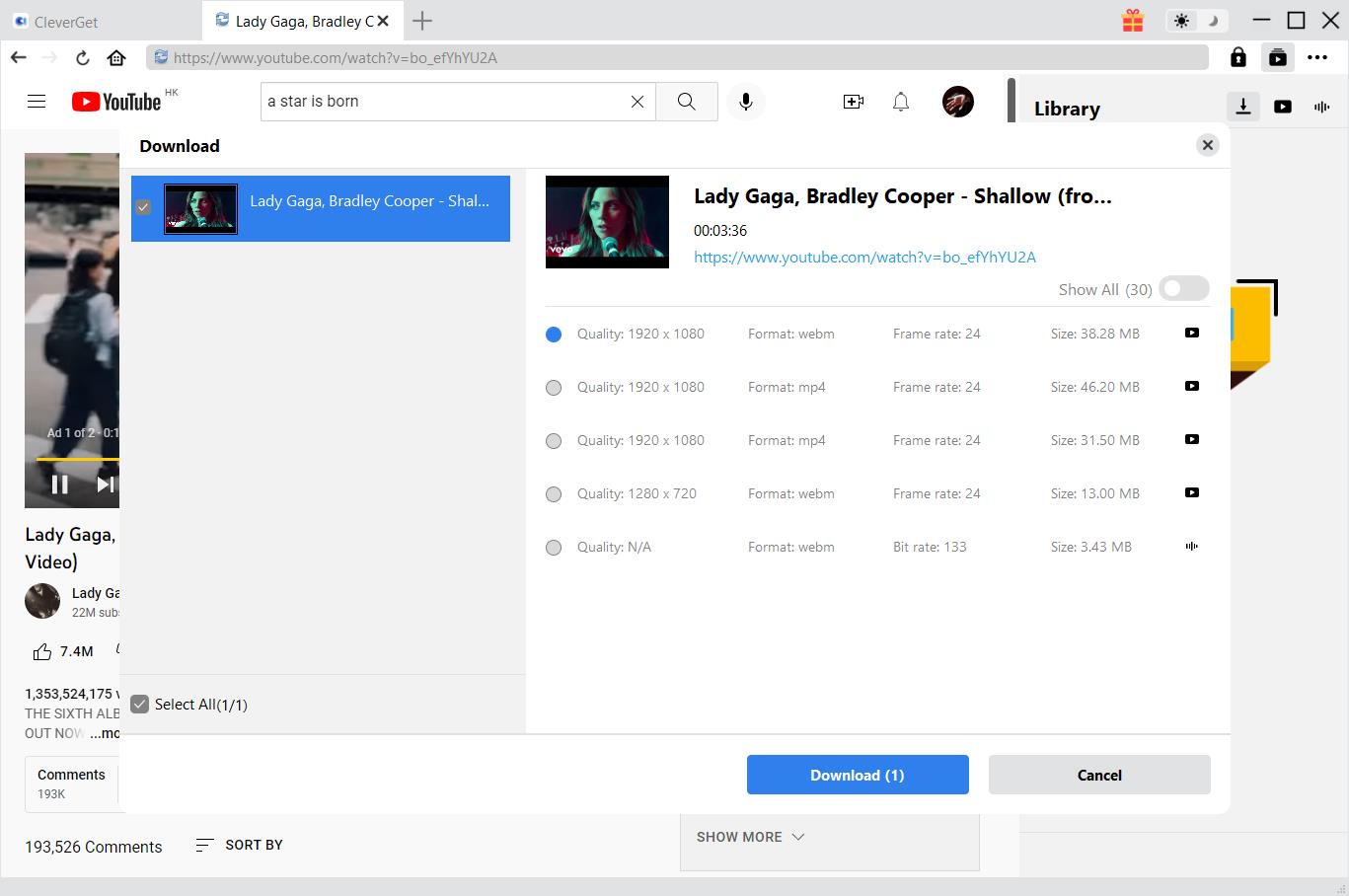