How to Play FLAC File Free with Free FLAC Player

"Can iTunes play flac files? Can it do so natively or be modified to do so? Can it import .flac files, converting them to .mp3 or .mp4 or .aac or something? Thanks." - By Jeff Blanding on Apple Support Communities.

What is FLAC file? Short for Free Lossless Audio Codec, FLAC is an audio compression format like MP3. Different from MP3, which uses a "lossy" compression that will discard audio information, FLAC uses a lossless compression, which will not change audio quality after compression. FLAC stands out as the fastest and most widely supported lossless audio codec, and is the only one that at once is non-proprietary and unencumbered by patents. It has an open-source reference implementation, a well-documented format and API, and several other independent implementations.

If you rip an Audio CD track to a FLAC file, the result FLAC file will retain the same audio quality of the original (CD quality), like a WAV file, but take less space (usually about one-third of the corresponding WAV file). If you rip an Audio CD to an MP3 file, the MP3 file would take even less space (about one-tenth of the corresponding Wav file). However, the result MP3 file would be a lossy audio file in which part of sound information would be lost. For average people, lossy compression algorithms like MP3 or WMA have no difference from the FLAC file. But for some people whose ears are well trained or sensible enough, FLAC lossless compression brings obviously high-quality audio enjoyment.

Currently there are 2 major ways to get FLAC files: buy it from online music stores, or rip audio CD to FLAC file (or convert other audios like MP3 to FLAC file). You could also try to download FLAC files online, which is hard legally.

To play FLAC file free on Windows PC, the best way is without doubt making use of free FLAC player software. What you need to do is find a proper free FLAC player. Leawo Free Blu-ray Player becomes your best choice.

The below are the detailed steps:

Solution 3: Convert FLAC File to Other Audio Formats Like MP3 for Playback 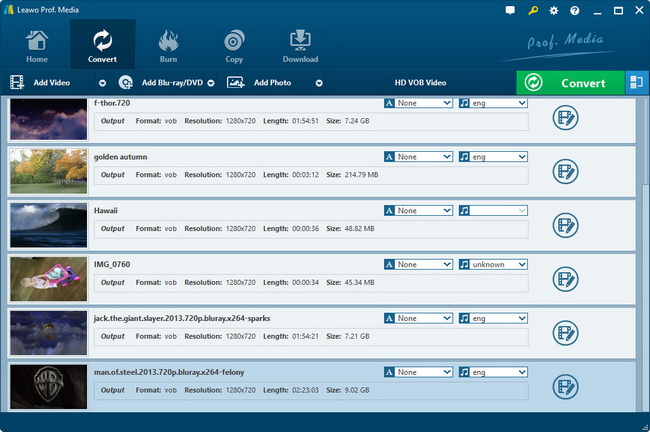 How to convert FLAC to MP3 or other audio formats? The below steps would show you details:

Without doubt, playing FLAC file free with free FLAC player is the easiest way. It's not that safe to install plug-ins for Windows Media Player to play FLAC files, but you needn't install 3rd-party FLAC player freeware. The last solution seems to be more trouble, and will definitely result in audio quality loss by converting. But it is much more pratical, since you could play FLAC files free on any media player through this method.

This is a widely known free FLAC player software program that offers both wonderful quality and wide support of operating systems. It has multi-OS versions for Microsoft Windows, Mac OS X, iOS, Android, GNU, Linux, BeOS, and BSD. This means that you could even get a portable free FLAC player for your smartphones or tablets. Similar to Leawo Free Blu-ray Player, this free FLAC player could play DVD, up to 4K/1080P video, ISO file and audio files, but lacks support of Blu-ray playback.

One of the most sought after FLAC players for Windows, Foobar2000 could be chosen over most others as it promises gapless playback for most of the common formats such as MP3, AAC, Vorbism, WavPack, WMA, MP4 and SND. It boasts of full Unicode support and tags along an interface layout that can easily be customized. Moreover, the tool lets you configure keyboard shortcuts, offers full ReplayGain support and even transcodes audio formats, thanks to its Converter component. Zoom Player is a slick player of online multimedia content for Windows PCs. It successfully includes two players in one - a no fuss simple one and an advanced one with just about every imaginable tweaking and customization option. The basic version of Zoom Player comes installed with a graphic equalizer, playlist editor and everything else that you'd expect in a basic player.  The professional version comes with more features, including a more powerful Playlist Manager, added safety features (such as password protection), Media Definitions plus Web Remote (so you can control Zoom Player from your web browser) and an Extended command line interface, exposing many Zoom Player functions directly from the command line. What's more, the professional version even supports to play DRM protected movies and music (Windows Media DRM).

It could play back almost all video and audio files, since it has a particular useful codec detector, which will detect your players and suggest correct codec to install for playing different media files. Therefore you needn't to install a 3rd-party inspection device.

Once named as DAPlayer, 5KPlayer is a sleek, powerful and free media player that works with hundreds of formats, including high definition video. This free video player comes with more than 400 audio and video codecs. That means you could play nearly all video and audio files with no need to worry about the format incompatibility issue. It could also play Blu-ray and DVD discs, up to 1080P full HD video (AVCHD, MKV, H264 and more). As a free FLAC player, it could play FLAC file free without any quality loss. Leawo Free Blu-ray Player for Mac offers comprehensive solutions for you to play all kinds of media files on Mac computer, be it iMac or MacBook, with high quality.

Winamp is a media player for Windows, macOS and Android, saying that it is an overall player for all systems. It supports numerous audio and video formats. It also plays streamed video and audio content, both live and recorded, authored worldwide. Playing .flac files will be rather easy on this player. Music fans would not be unfamiliar to this incredible player. It is a simple media player that will play your music without all the fuss of importing into iTunes, database lookups, album art displays, playlist editors, etc. To be clear, VOX supports all popular formats including Hi-Res ones. Lossless: FLAC, APE, WAV, ALAC, etc. and Lossy: MP3, WMA, OGG, etc. It is a five-star music player for MacOS requiring OS X 10.9+. It can play audio files according to the highest standards. Besides it works well with iTunes content except for DRM protected files. This app can go well as an audio receiver. It can stream the music from Mac to another Mac with Elmedia Player installed with larger speakers connected. To play your .flac files on Mac, it won’t let you down! Tomahawk is less known to people but it does not mean it is not good. In fact, it is a brilliant multi-platform free music player Mac that is supported by Windows, Linux and Mac OS. It is packed with lots of features but its functionality is neither complex nor hard to understand. Like VLC, it is also a free, open-source music player. You can directly put your .flac file on it to play smoothly.