Dolby TrueHD VS Dolby Atmos, Which is Better?

Part 1: Is Dolby TrueHD The Same as Dolby Atmos?

If you are wondering whether the Dolby TrueHD and the Dolby Atmos are the same things, then the answer is clear: they are not the same.

Although both sound technologies are developed by Dolby Laboratories, Inc, an American company specializing in audio noise reduction and audio encoding/ compression, they are actually very different from each other. First of all, Dolby TrueHD is a lossless audio codec that supports up to eight audio channels on Blu-ray Disc.

Dolby Atmos soundtracks, on the other hand, consist of up to 128 audio objects that are mixed in a 3D sound field during the production process. Also, Dolby Atmos and Dolby TrueHD are two separate soundtrack formats. But Atmos data on Ultra HD Blu-ray is actually an extension to TrueHD that is folded into the bitstream to maintain backward compatibility. As mentioned above, although the names look similar, Dolby Atmos and Dolby TrueHD are actually two separate soundtrack formats. Here is how these two sound effects work: When the soundtrack is played back in a movie theater or home environment, the audio objects are rendered by an Atmos decoder to the available speaker set, which includes overhead ceiling speakers. Normally, the Dolby Atmos effect is applied before the Dolby True HD if both of the options are on. That is to say, if you play a disc with an Atmos soundtrack, the Atmos extension data is decoded by an Atmos-compatible receiver. If your receiver isn't Atmos compatible, the extension data is ignored and the soundtrack is decoded as regular Dolby TrueHD.

Part 2: Which Should You Choose? TrueHD Or Atmos

After reading the introductions above, I believe you have already known that the Dolby True HD and Dolby Atmos are not the same things. Therefore, here comes the question: Which of these two advanced sound systems is better and can bring us more sound enjoyment?

In fact, the answer to this question could vary from person to person. Some people can sense the differences between the two sound effects almost instantly, while other people can't even feel the difference between them. If you want to know which one of the two sound systems can bring you more pleasure when you are watching a movie, it's better that you experience both of them for yourself. With that being said, there are indeed some differences in the playback that these two sound systems could bring. If you want to know which one suits you better without experiencing them both, then the information below might give you some insight into the differences between the Dolby True HD experience and the Dolby Atmos experience.

First of all, if you enable Dolby TrueHD and disable Dolby Atmos, you would have a great surrounding sound effect, especially if you have a set of 5.1 channel sound equipment. This is a really nice experience for people who seek for an immersive movie-watching experience. If there is also a 3D technology applied on the picture, then you will definitely get an ultimate immersive movie-watching experience and feel like you are actually inside the fancy world created by the movie. If you enable Dolby Atmos and disable Dolby TrueHD, on the other hand, the sound effects would be more realistic and more dynamic. Because there are 128 audio objects that are mixed in a 3D sound field during the production process, Dolby Atoms could bring you an ultimate realistic movie watching experience.

Part 3: How to Download Movies with Dolby TrueHD & Atmos Retained?

Now that you know the difference between Dolby TrueHD and Dolby Atmos, you must be wondering how to get such a resource. In fact, many websites have partnered with Dolby and have built-in Dolby TrueHD or Dolby Atmos sound in their movies. Look closely, and if there is one, it will be marked above the title of each movie. However, the disadvantages of streaming media are well known - it can only be watched online and cannot be downloaded offline. That means you have to put up with ads and buffering. In fact, you can use CleverGet to download these movies, and the Dolby TrueHD and Atmos sound effects in the movie can be perfectly preserved. Plus, in terms of video quality, movies can also be saved in resolutions up to 8K. Therefore, you can use this software to get the best audio and video experience.

Download CleverGet from the button below and install it on your computer. Then, launch it.

Enter the URL of the target movie with Dolby TrueHD or Dolby Atmos in the address bar and press "Enter" on your keyboard. After opening the link, CleverGet automatically grabs all downloadable videos. Alternatively, you can click the website icons that listed on the homepage to visit the website. Then, search for what you want to download as usual. 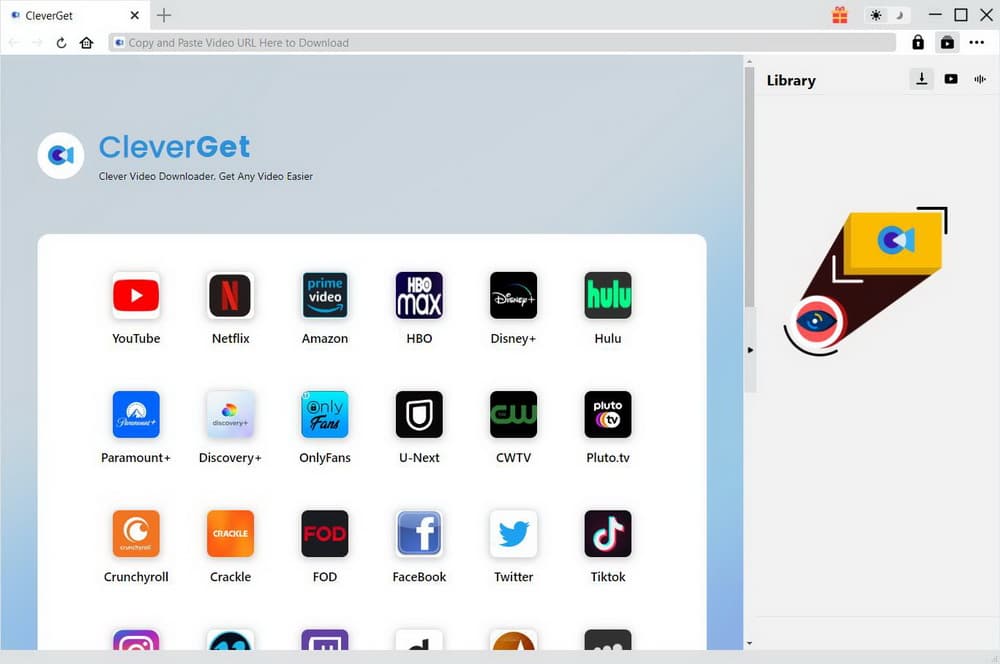 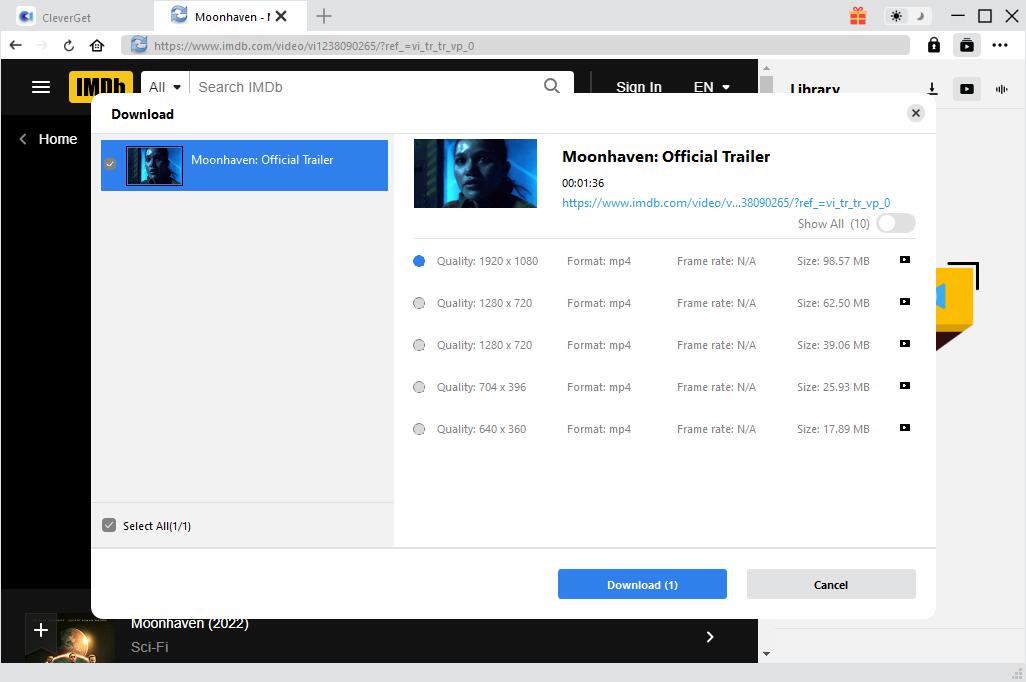 Under the "Library" sidebar, you can view download tasks and manage downloaded videos. Or, if you want a better player to play these movies, check out the next section. 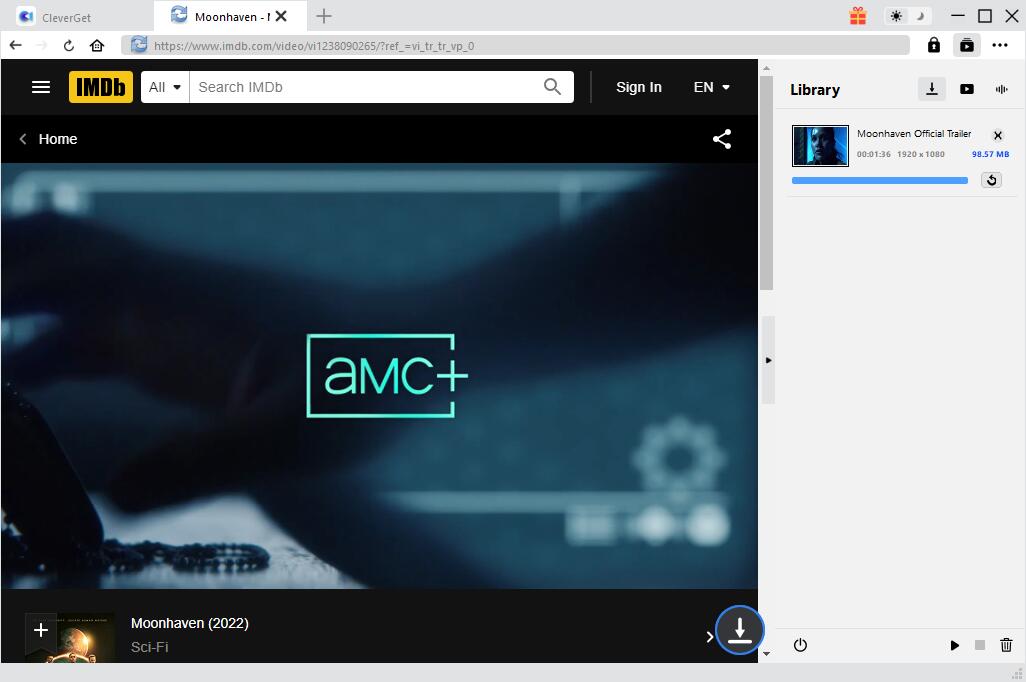 Leawo Blu-ray Player is a professional video player application for all kinds of movie entertainment, and it's also one of the best players with Dolby Atmos support. As the name suggests, the player can not only play all kinds of digital video files, but also play Blu-ray or DVD materials for completely free, and even rip Blu-ray to MKV videos in the premium version.

With an advanced video playback technology, Leawo Blu-ray Player can deliver a great video performance even when dealing with HD videos in resolution of 1080P or 4K. It can also support 180+ digital video or audio formats, so that you never have to worry about the format compatibility of your movie. For all supported video and audio materials, Leawo Blu-ray Player provides the perfect Dolby TrueHD and Dolby Atmos support. As long as your movie file has the Dolby TrueHD or Dolby Atmos information, Leawo Blu-ray Player can give you the option to enable them and provide an ultimate stereo sound effect, boosting your movie watching experience to a whole new level.

Part 5: How to Enable Dolby TrueHD and Atmos Audio in Leawo Blu-ray Player

As a powerful media player application, Leawo Blu-ray Player provides not only Dolby TrueHD or Dolby Atmos sound effect, but also support other advanced sound effects like AC3, DTS, AAC, Multichannel LPGM and DTS-HD. Also, the player provides an easy and intuitive way for you to enable these effects at any time. Here is how to have an ultimate movie watching experience with Leawo Blu-ray Player by enabling these advanced sound effects.

Step 1: Download Leawo Blu-ray Player from Leawo’s official website and install the free media player application on your computer.
Step 2: Launch Leawo Blu-ray Player and import your movie for playing. To import a digital movie file, click the “Open File” button and browse your local folders. To import a movie in your CD-ROM, firstly insert the disc into your CD-ROM, and then click the corresponding button labeled with the title of your CD-ROM.
Step 3: After importing the movie, Leawo Blu-ray Player should start playing the movie immediately. During playback, press the hot key “F5”, or right click on the playback window to call out the settings panel. On the panel, navigate to the “Audio output” tab, and then you should be able to see all the available output sound effect options.
Step 4: Click the round switch behind the sound effect option to turn it on. After turning the sound effect on, you can click the menu and the sound effect will be applied to your movie immediately. It's obvious that both Dolby sound effects can boost your movie-watching experience, and you can only pick the best one for you after trying them by yourself. If you want to have a good Dolby TrueHD and the Dolby Atmos sound effect when you are watching movies on your computer, then you'd better use Leawo Blu-ray Player to play the movie and enable the sound effects according to the guide given above.