Two young men, Martin and Rudi, both suffering from terminal cancer, get to know each other in a hospital room. They drown their desperation in Tequila and decide to take one last trip to the sea. Drunk and still in pajamas they steal the first fancy car they find, a 60's Mercedes convertible. The car happens to belong to a bunch of gangsters, which immediately start to chase it, since it contains more than the pistol Martin finds in the glove box.

2. The Pursuit of Happyness A struggling salesman takes custody of his son as he's poised to begin a life-changing professional endeavor. Based on a true story about a man named Christopher Gardner. Gardner has invested heavily in a device known as a "Bone Density scanner". He feels like he has made these devices. However, they do not sell as they are marginally better than the current technology at a much higher price. As Gardner tries to figure out how to sell them, his wife leaves him, he loses his house, his bank account, and credit cards. Forced to live out in the streets with his son, Gardner is now desperate to find a steady job; he takes on a job as a stockbroker, but before he can receive pay, he needs to go through 6 months of training, and to sell his devices.

This is a classic piece of work by Will Smith. Many people think it is a soul-touching story. Actually, it only delivers one theme: there is no "Y" in happiness, but "I" in it. No matter how hard the life is, never give up the pursuit of happiness. Geniuses always have troubles that ordinary people do not understand. The guy named Will Hunting is such a math genius with psychal issues. As a janitor at MIT, Will Hunting has a gift for math and chemistry that can take him light-years beyond his blue-collar roots, but he doesn't realize his potential and can't even imagine leaving his childhood Boston South End neighborhood, his construction job, or his best friend. To complicate matters, several strangers enter the equation: a brilliant math professor who discovers, even envies, Will's gifts, an empathetic shrink who identifies with Will's blue-collar roots, and a beautiful, gifted pre-med student who shows him, for the first time in his life, the possibility of love. Charles Sanford "Charlie" Babbit is a self-centered Los Angeles-based automobile dealer/hustler/bookie who is at war with his own life. Charlie, as a young teenager, used his father's 1948 Buick convertible without permission and as a result, he went to jail for two days on account that his father reported it stolen. It is then that Charlie learns that his estranged father died and left him from his last will and testament a huge bed of roses and the car while the remainder will of $3 Million goes into a trust fund to be distributed to someone. Charlie seemed pretty angry by this and decides to look into this matter. It seems as if that "someone" is Raymond, Charlie's unknown brother, an autistic savant who lives in a world of his own, resides at the Walbrook Institute. Charlie then kidnaps Raymond and decides to take him on a lust for life trip to the west coast as a threat to get the $3 Million inheritance. Raymond's acts and nagging, including repeated talks of "Abbott & Costello", "Four minutes till Wapner" and refusal to fly on an airline except Quantas drives Charlie insane... and out of his selfish world into a cross-country trek of pure love and understanding that these two both have. This movie is best for brothers to watch on Thanksgiving. Gil and Inez travel to Paris as a tag-along vacation on her parents' business trip. Gil is a successful Hollywood writer but is struggling on his first novel. He falls in love with the city and thinks they should move there after they get married, but Inez does not share his romantic notions of the city or the idea that the 1920s was the golden age. When Inez goes off dancing with her friends, Gil takes a walk at midnight and discovers what could be the ultimate source of inspiration for writing. Gil's daily walks at midnight in Paris could take him closer to the heart of the city but further from the woman he's about to marry. A Thanksgiving classic, "Alice's Restaurant" hit the big screen in 1969. This larger-than-life recreation of Arlo Guthrie's song of the same name is an entertaining romp through 1960s pop culture, complete with a firsthand account of anti-war sentiments. After Guthrie visits his friend Alice for Thanksgiving, he offers to transport her trash to the dump, where he encounters a closed landfill. A series of decisions prompts him to push the garbage into a gully. When Guthrie's caught by local authorities, a memorable court appearance is followed by a series of legal events in which the Army finds him unfit for military service. Long before she wed Tom Cruise, Katie Holmes played the lead in "Pieces of April," a 2003 comedic drama. At the center of it all is Thanksgiving dinner, which April attempts to whip up in her cramped and less-than-clean New York City apartment for a cast of snarky, largely estranged family members. We admit that while her apartment makes us want to grab the nearest disinfectant spray, it offers an interesting backdrop for the action that ensues. Although the movie has an amateur pallor, it makes up for it with quirkiness and an emotionally satisfying conclusion -- and makes the list of our Thanksgiving movie picks. This 1987 film follows Neal Page (Steve Martin) and Del Griffith (John Candy) on a journey of Odysseus-like proportions. The impromptu duo's nearly failed attempt to return from a business trip in time for Thanksgiving dinner leads to a likeable stint of self-discovery. Soon, each man realizes he isn't quite the easy-going-peach-of-a-guy he assumed he was, and we figure out that what started as a comedy offers a few redemptive lessons, too, like caring for a nearly total stranger. It's enough to make us feel a little smarmy and wistful -- which is just the right mood for a family Thanksgiving. Honestly, there's never a bad time to watch The Karate Kid, but the 1984 film — and its sequels — are especially good screening material for a holiday marathon because they really do have something for every type of movie fan. Action? This one has martial arts galore. Positive themes? How about only using violence as a last resort and recognizing the beauty in other cultures' traditions? Romance? Stars Ralph Macchio and Elisabeth Shue are everyone's favorite high-school sweethearts. And hey, if you've got time to spare, why not watch all three films? You can thank us later. Owen Wilson and Woody Harrelson play a pair of turkeys who travel back in time to get turkey removed from the traditional Thanksgiving dinner menu in this 2013 animated film that also features the voices of George Takei and Parks and Recreation star Amy Poehler. A nice mix of kid-friendly hijinks and in-jokes for adult audiences, the feather-filled buddy comedy offers some holiday-appropriate movie fare that will keep the young ones entertained while offering some entertainment value for the older crowd, too.

No matter you plan to watch Thanksgiving movies on your computer, DVD player or portable devices like iPad tablet, you need to adopt a movie player to play back these Thanksgiving movies. Due to format incompatibility issues, you may find that Windows Media Player and QuickTime player are not able to play back movies you've downloaded online or got from your friends. To solve the format incompatibility issues, here we would recommend some effective solutions, including free movie player for computer and free video player for portable devices.

The Free Movie Player, officially named as Leawo Blu-ray Player, is compable of playing back any movie file, including Blu-ray, DVD, ISO image file, and up to 1080P HD movies in 180+ formats like MP4, FLV, AVI, MTS, MKV, MOV, WMV, M4V, etc. It plays back all Blu-ray and DVD discs in the market for its outstanding disc decrypting ability, and delivers excellent image and audio enjoyment with advanced technology. Learn More 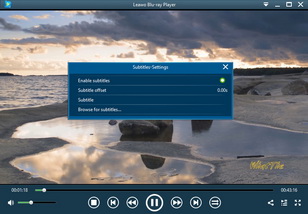 Formally known as a total movie converting solution, Free Movie Player for portable device is to convert movies from one format to another by using Leawo's Total Media Converter Ultimate, which has a free video converter built in. This solution is perfect for all media players and portable devices since it can handle nearly all format conversions on your computer. You only need to transfer converted movies to your devices for playback. Learn More 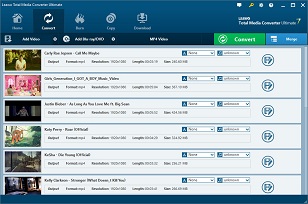