If you are a beginner, you may be wondering what an ISO file is. Basically, an ISO file can be regarded as a disc image, which is a distribution format for disc contents, more like a .zip or .cab archive file, only without the compression. To make it more specific, it contains all the files and folders that are stored on a disk, much like a .zip or .cab file containing a collection of files and folders. The major difference lies in that an ISO file is a byte-for-byte copy of the low-level data actually stored on a disk. The operating system checks and looks for a proper format from the archive to interpret the ISO file as it would do to a real disc. That is how an ISO image file function as a disc. Frankly, an ISO file is more robust and flexible than a disc, which may suffer from scratch, damage, and so on. To convert a Blu-ray to ISO on Mac, pay attention to these prerequisites. First and the most important, you must have a drive suitable for streaming Blu-ray on Mac so that you can seamlessly open the Blu-ray on your Mac. Although an external drive might cost you some money, you should get one otherwise you are not able to play any disc on your Mac. This is sort of Apple policy to attempt to transfer its users to rely on digital media provided on its store. Anyway, getting a suitable drive to play Blu-ray disc is a good start. Now you need a capable Blu-ray to ISO converter on Mac to fulfill the conversion process. Technically, a variety of programs are provided over the internet, which boast to be qualified Blu-ray to ISO converters on Mac. You won’t have to waste much time in searching and verifying all these so-called qualified programs. Hence, we start a vote from the internet on this and solicit all the public views to pick the most competitive program for you to convert Blu-ray to ISO on Mac. Leawo Blu-ray Copy is the best choice at the moment, far rivaling other programs in the same category.

The first thing to do before you can rip Blu-ray to ISO on Mac is find a suitable Blu-ray to ISO Converter macOS has. A good Blu-ray to ISO converter should be able to help you convert Blu-ray to ISO losslessly while keeping the conversion process as simple and fast as possible. As is mentioned previously, Leawo Blu-ray Copy for Mac is an excellent choice worth considering. Not only is it able to rip Blu-ray to ISO losslessly, it’s also very easy to use even for novices. There are a lot of things you can do with it. The ISO file you get from your Blu-ray disc can be burnt to a blank disc to create a new copy of the original disc using the program. And ISO is not the only form of backup you can convert Blu-ray into. There’s also the option for you to convert Blu-ray to Blu-ray folder and store the folder on your Mac’s hard drive. You can also directly copy a Blu-ray disc to another disc as long as you have two disc drives and one of them is a disc burner.

How to rip Blu-ray to ISO on Mac

Check out the detailed steps of the Blu-ray to ISO conversion process in the content below. 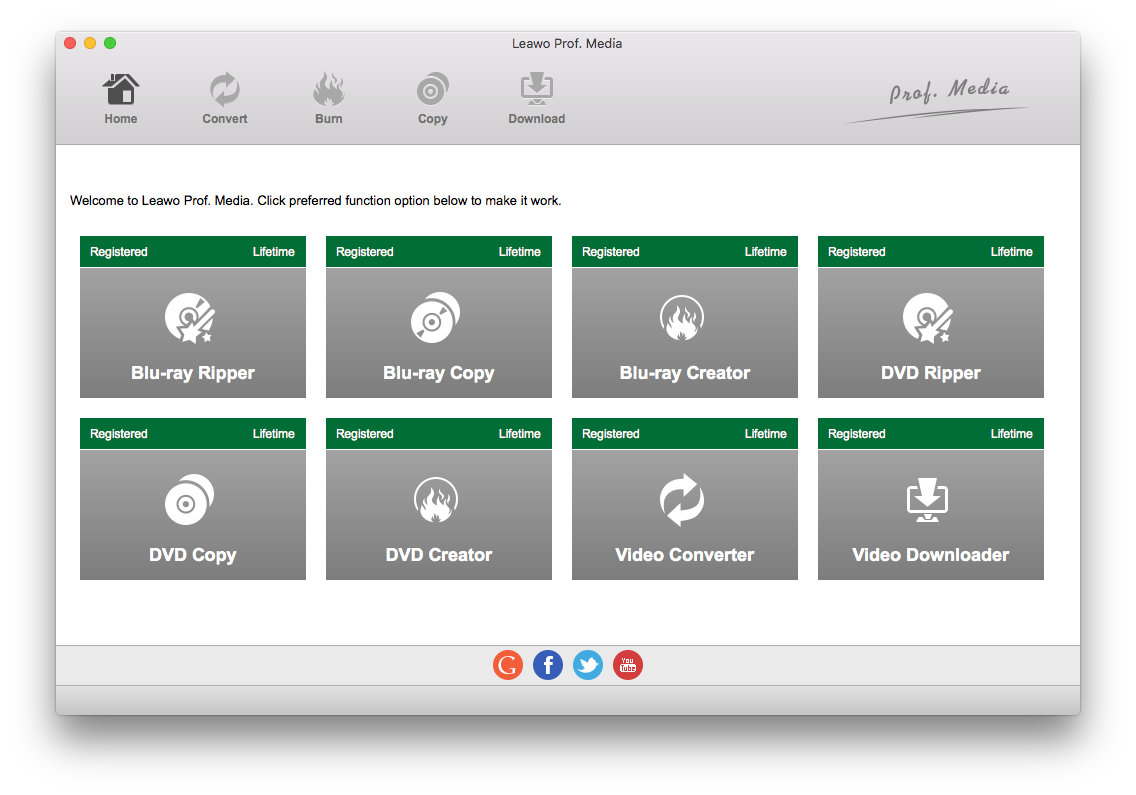 Step 2. If you’ve insert the Blu-ray disc in the disc drive previously, the disc should be ready by now and you can directly import the data in it to the program by clicking Add Blu-ray/DVD>Add from CD-ROM>[your Blu-ray disc]. 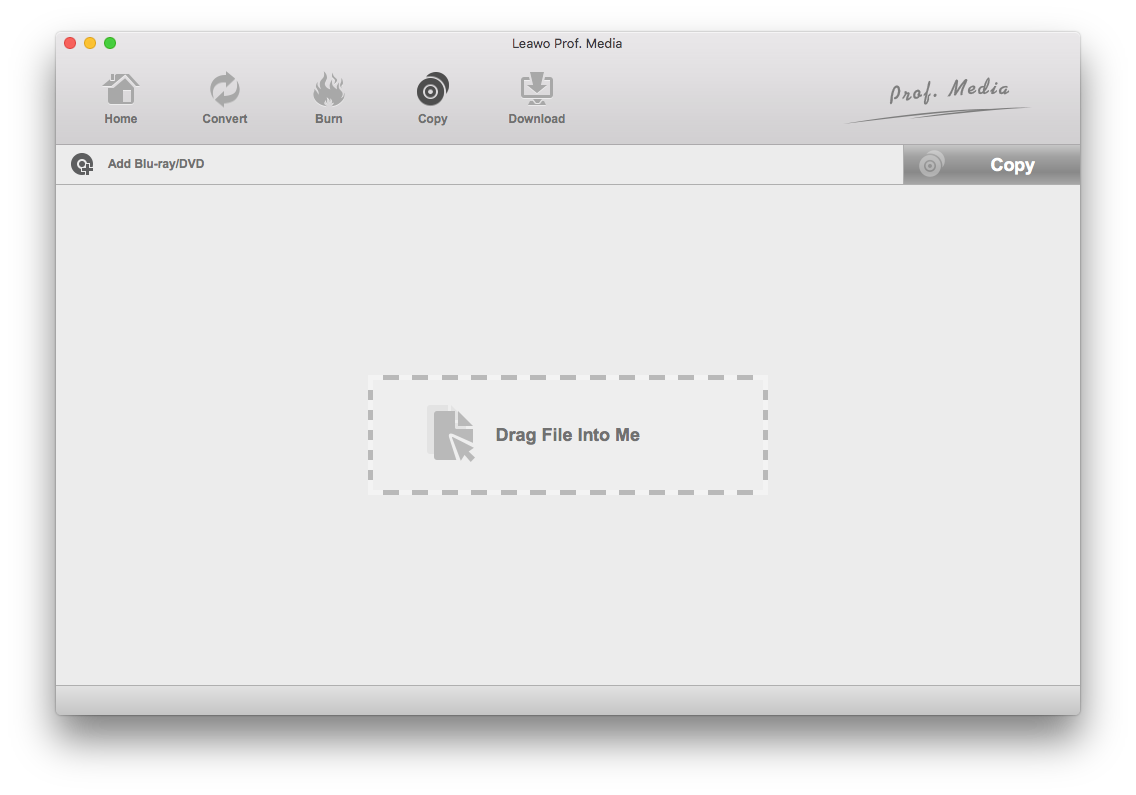 Step 3. You may not need all the content in the disc to be included in the ISO file, so in this step you can exclude the data you don’t need by choosing different copy modes. If you choose Full Movie, all the content in the disc will be included in the ISO file. When you choose Main Movie, you can see there’s one video, one audio track and subtitles are selected on the respective lists. Usually the video chosen is the main movie and you can select a new one if you need. You can only select one video when under Main Movie mode. But if you use Custom Mode, you can select multiple videos, audio tracks and subtitles as you like. If you are not sure if the video you’ve chosen is the one you need, you can select the video from the list and play it with the video player on the right. At the bottom of the disc content lists is a drop-down menu for you to choose the format of the ISO file. If you want to perform a 1:1 lossless Blu-ray to ISO conversion, you can choose the same format as the original Blu-ray disc. If the original disc is BD50, you can also choose BD25 to compress BD50 to BD25 if you need. 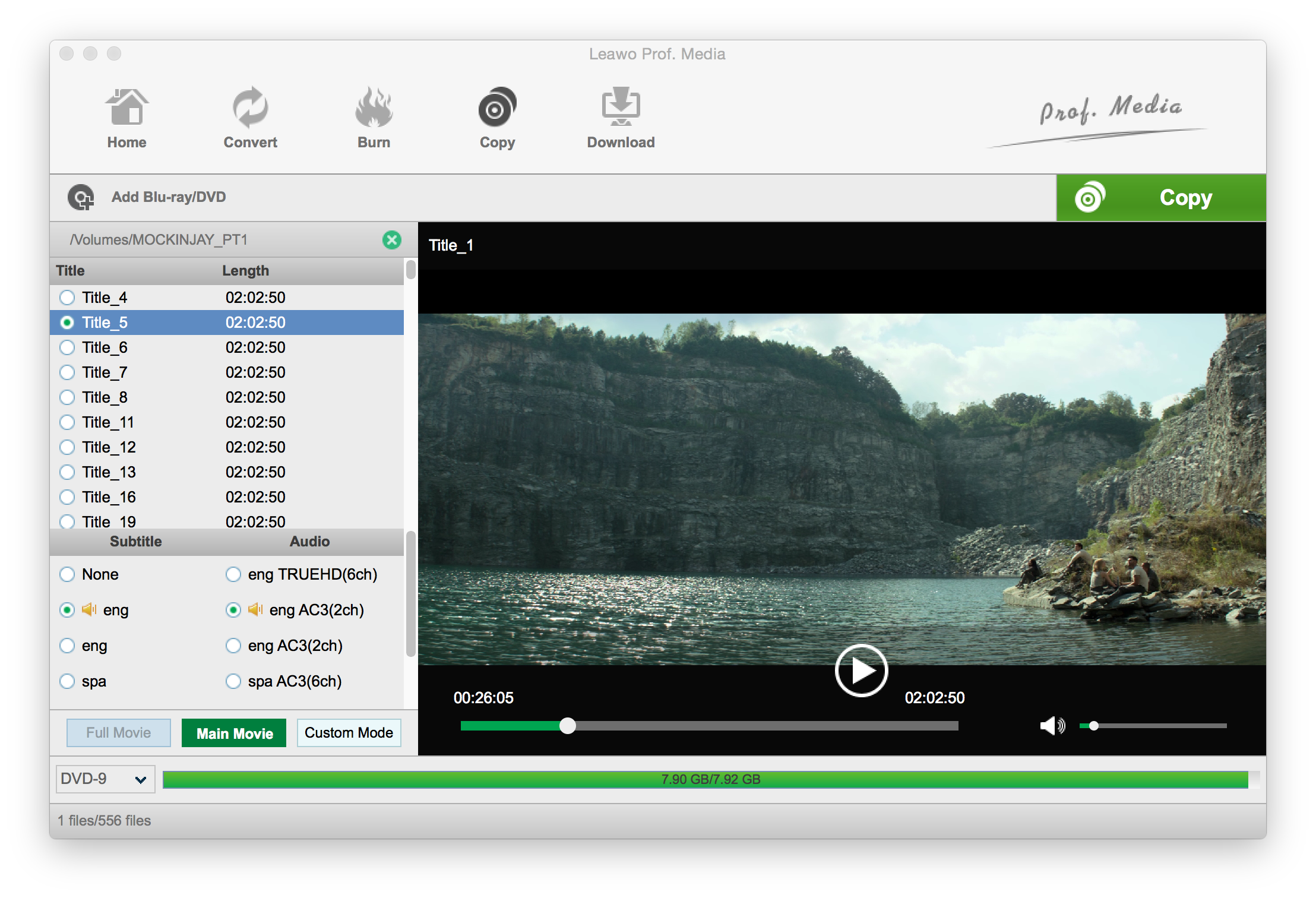 Step 4. This is the final step, hit the green Convert button and a sidebar would be displayed above the video player. Check ISO File on the top of it as our target is to convert Blu-ray to ISO. Set the location of the resulting ISO file in the Save to box and then hit the Copy button on the sidebar to start converting Blu-ray to ISO image on your Mac. 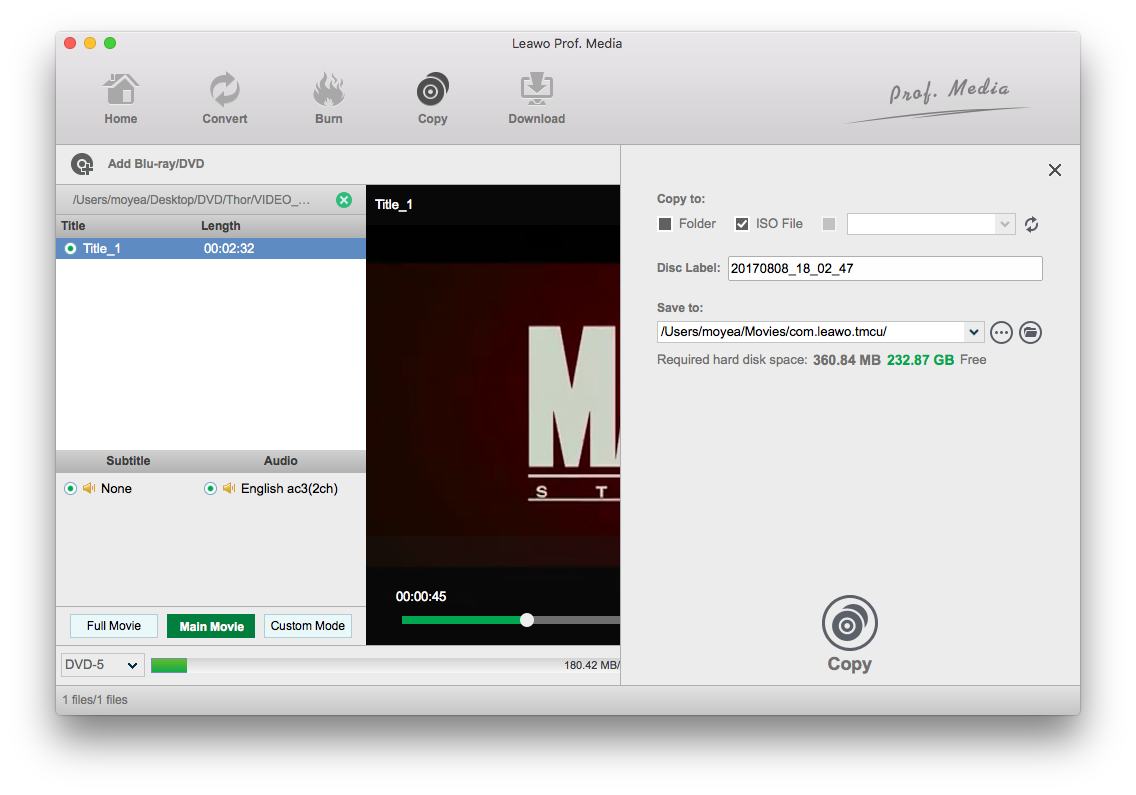 Below is the video guide of Leawo Blu-ray Copy for Windows. The steps are basically the same as using the program on Mac. So you can follow the steps of the Windows version to copy a Blu-ray disc on Mac.

Now you have successfully copied the Blu-ray to ISO on Mac with the best Blu-ray to ISO converter – Leawo Blu-ray Copy for Mac. You can either play it within Mac via ISO player or burn the ISO to a new disc. Talking about players to play ISO file directly on Mac, I have some recommendations for you here.

Featuring a totally free Blu-ray player, this program handles Blu-ray/DVD/4K HD video perfectly. Like Leawo Blu-ray Copy, this player is able to filter any region code and make sure what users play is a region free file. Besides, it is compatible with DVD content, which means it can be regarded as a professional DVD player for Mac, and accepts DVD counterparts (DVD disc/folder/ISO image file). It is sufficiently convincing for users to use Leawo Blu-ray Player to stream any ISO file directly on Mac. It is quite easy to operate and offers extremely neat user interface. With only a few clicks you can enjoy movies like that in a cinema. 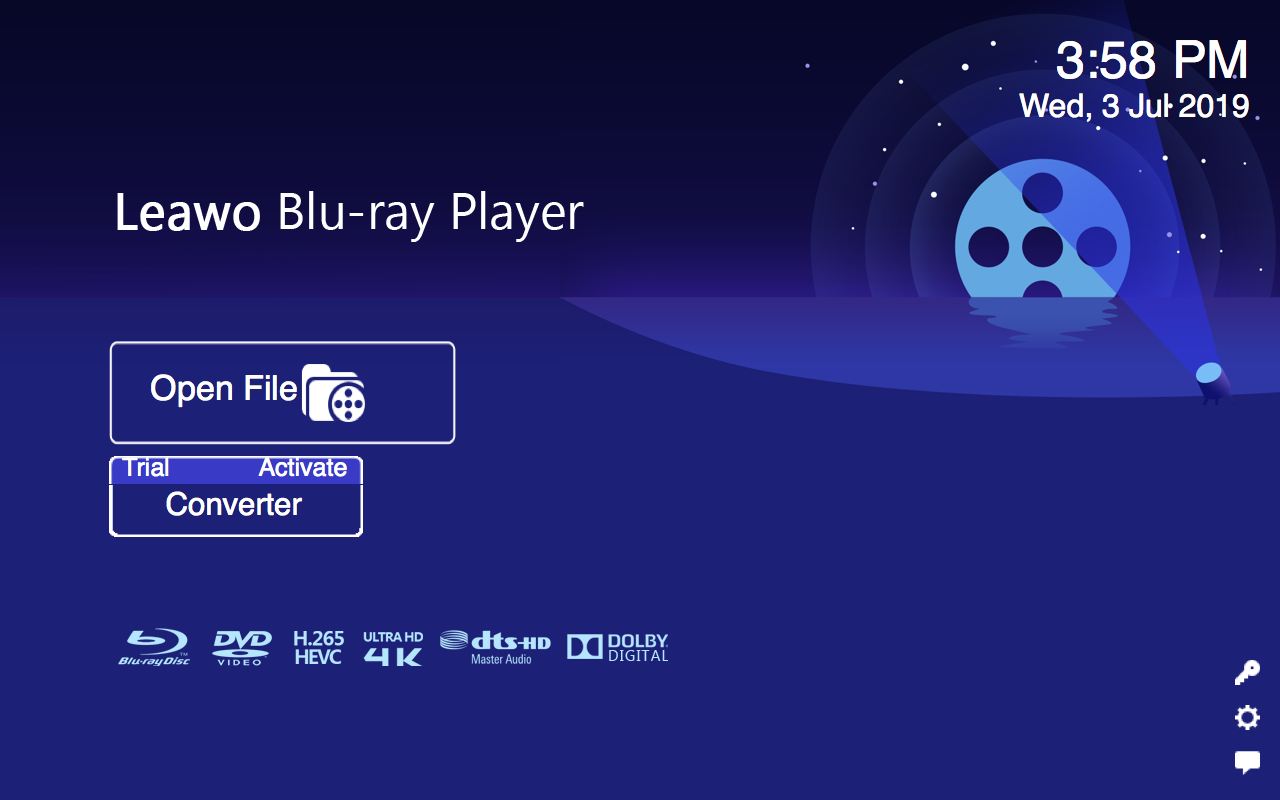 It is a brilliant Bu-ray player as well. Being developed to play Blu-ray disc, ISO files, IFO file, this Blu-ray player can be an option to provide you optimized 1080p video effect with clear and sharp pictures. You are able to download and install this player free if your Mac is OS X 10.5 or above. VLC media player can also act as Blu-ray ISO player on Mac. It is a common player and sometimes it functions as a video converter as well. To use it to play ISO file, simply launch the program and click to open the ISO file. It works fine in most cases however, it has some limits which may lead to failures during ISO playback. All in all, it is a good choice but not highly recommended in this case. In summary, an ISO file triumphs Blu-ray disc thanks to convenience to store the file with relatively compact virtual space, phasing out the risks of getting damage or scratch that are commonly seen on a real disc. Apart from that, an ISO file keeps everything and allows users to take whatever they require from a disc. It is exactly a disc in disguise. This article is written against this backdrop that there is an increasing demand to convert Blu-ray to ISO on Mac for various reasons just like what I name above. Leawo Blu-ray Copy Mac is a top-rated program to facilitate users with Blu-ray backup to an ISO file or folder or even a new disc. With this professional Blu-ray to ISO converter on Mac, users might feel relieved to convert their Blu-ray to ISO on Mac efficiently and losslessly. Furthermore, there are a few recommended Blu-ray players that are capable of ISO playback directly. That means you can stream an ISO file to enjoy original Blu-ray disc movies just like what you do with a real disc. This is amazing and you should definitely give it a shot. As usual, you are more than welcome to leave your comments in the comment section and let me hear your voice.