As far as I am concerned, owning to its extremely HD video effect and truly cinematic video experience, Blu-ray turns out to be the essential home entertainment media currently. And it’s really convenient to get Blu-ray movies from iTunes, or get digital copies bundled with a Blu-ray. But not all ones come with a digital copy. Though there are some companies offer eligible digital copy, it requires extra expense. Besides, though you can play Blu-Ray discs in a few free desktop computer programs, most of them do cost a bit. Even worse, if you get a Mac, it becomes even more difficult, and pretty much impossible on Linux. What can you do if you want to enjoy the Blu-ray movies on the go or share it on video streaming site? I think, the best way is to rip and convert the content into a digital format. Therefore, it presents a challenge: Is there any good Blu-ray recorder for mac? In fact, there are a lot of different methods for ripping Blu-Rays and more than a few ripping solutions. Hereby, we will show you a few pieces of Blu-ray recording software to record Blu-ray on Mac: Screen recording software and Leawo Blu-ray Ripper for Mac.

Some screen recording software and Blu-ray recording software are able to make DVD or Blu-ray movie into a file, which is much useful and helpful if you prefer to back up a DVD movie for safe keeping. What is more, you can play it on your Mac, phone or tablet anytime, anywhere if you like.

With a screen recorder, you can easily capture and share footage straight from your desktop. Whether it be for work or entertainment, screen recording software can prove invaluable.

Famous for its professional and time-saving features, VLC Media Player is an innovative software application that allows you to perform screen capture and screen recording. With a quick click-hold-drag technique, it helps effortlessly capture entire desktop, region, window, or scrolling screen, which enables you to get all those images or video quickly and easily. What is more, it can handle tons of formats, from MPEG to FLV and RMVB file. OBS Studio is a highly-rated screenshot editor that you can download from the Mac App Store, for you’ll find that it includes many screen capture features that you’d find in more expensive software such as editing and annotation capabilities. Its high performance real time video/audio capturing and mixing will leave you deep impression. What is more, you can also set up an unlimited number of scenes that you are able to switch between seamlessly via custom transitions. Time to download and start streaming quickly and easily on Windows, Mac or Linux. The idea of ripping Blu-ray movies to Mac involves using software to convert the contents of a DVD into a video file that can be easily stored on your Mac.

As professional Blu-ray recording software, Leawo Blu-ray Ripper is your one-click solution to convert Blu-ray movies you own into patents-unencumbered format that can be played everywhere. For this Blu-ray recorder output result, it supports more than 180 video and audio formats, including SD video formats, HD video formats and 4K video formats. The most notable feature of it would be its ability to convert Blu-ray to lossless MKV. It can make a lossless MKV video from your Blu-ray discs with all the data uncompressed. There won’t be any quality loss and you get to enjoy the movie with perfect quality on your computer. MakeMKV is most famous for ripping Blu-ray/DVD to lossless MKV, it’s a program you can utilize to record your Blu-ray movie on Mac. MakeMKV carries out a conversion task pretty fast and without errors, delivering quality video. MakeMKV is a program designed to rip DVD and Blu-Ray disc video, which works by decrypting proprietary discs to transfer codecs from the formats VOB and M2TS into MKV without doing any lossy codec conversion. Moreover, files such as ISO and BDMV are supported as well as folders containing IFO and DAT files. As it does not integrate a lot of settings, it can be used even by less experienced individuals. If you have a collection of Blu-ray movies, it’s essential to have a good Blu-ray recorder for mac to rip the audio and video content into digital formats, or make a safe copy on computer. Therefore, we will show you the details below how to use screen recording software to record Blu-ray on Mac and how to use Leawo Blu-ray Ripper to directly rip Blu-ray to Mac.

How to use screen recording software to record Blu-ray on Mac?

As we all know, VLC Media Player helps user quickly and effectively capture anything shown on the Mac screen. Keep reading below to find out how to customize the recording captured and share it directly to any of your favorite programs or applications. Above all is how to make a quick recording of your Mac screen. Though VLC Media Player is easy to use in a pinch, it does not offer advanced features like dedicated recorders.

How to use Leawo Blu-ray Ripper to directly rip Blu-ray to Mac?

Leawo Blu-ray Blu-ray Ripper for mac is simple to use but provides a healthy lineup of features, whose simple interface prompts you to perform the rip in five basic steps. Here’s something you should know about Blu-ray Ripper. It doesn’t work as an independent program but rather a module inside a software package called Leawo Prof.Media. The main title will be marked automatically after analyzing the whole DVD content. Later, you are able to choose Subtitles and Audio tracks for each title, click the play button on the thumbnail to preview source files, etc. There are 3 different loading modes: Full Movie mode copies the whole DVD, Main Movie mode performs movie-only backup while Custom Mode enables you to choose which parts of the DVD to copy. Step 2: To specify your output profile, click the drop-down box “MP4 Video” before the green “Convert” button and then select “Change”. There are various formats available for you to choose from. To record and convert the Blu-ray for playback on mobile devices, you can choose MP4 to make the program convert Blu-ray to MP4. To adjust the video and audio parameters (include: video codec, video quality, video resolution, bit rate, aspect ratio, frame rate, audio codec, sample rate, channel, etc.), select “Edit” on the drop-down box. Finally, apply it to all by checking “Apply to all” option on the drop-down box. Step 3: You are also allowed to customize output files(optional) with this Blu-ray recording software, right click a loaded title and then selecting “Edit” option, which allows you to customize videos in tabs: trim, crop, rotate, adjust effect, add watermark, etc. Step 4: After setting all output profile and parameters you like, go back to the main interface and then click the big green “Convert” button. Select an output folder in “Save to” box. 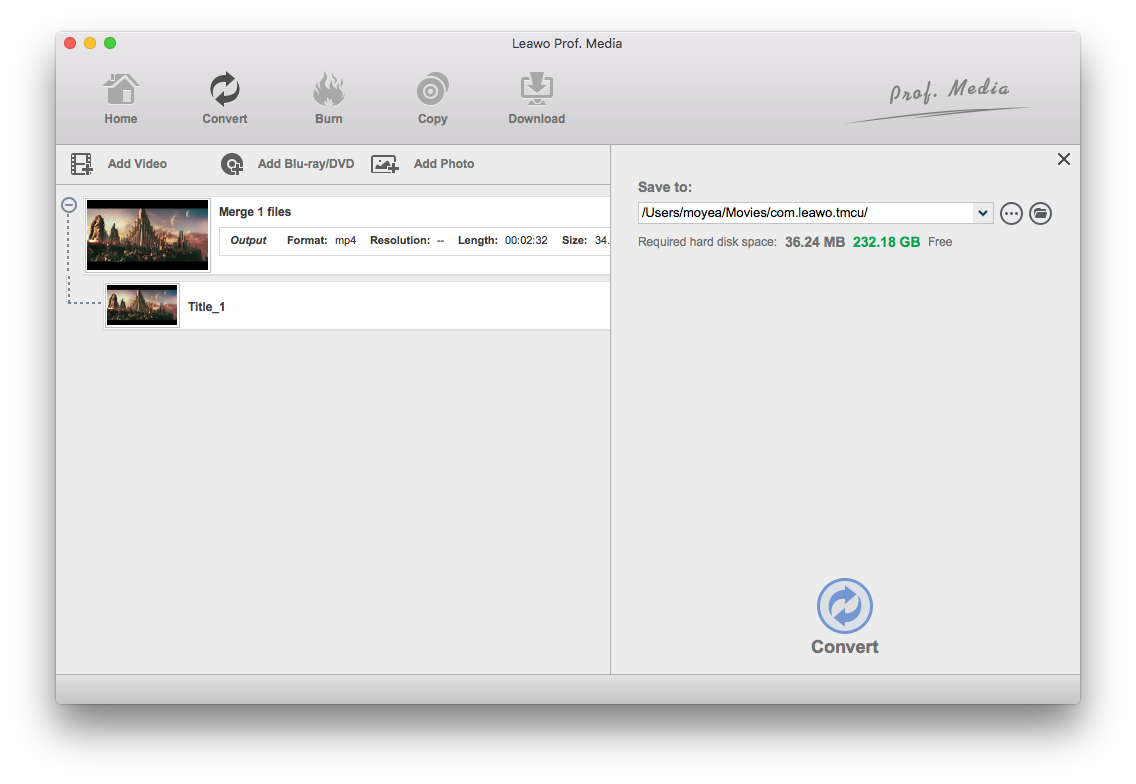 Step 5: As you can see, just in several simple steps, and then you click the “Convert” button on the popup sidebar to solve the problem on how to convert Blu-ray/DVD to video on Mac OS computers. Done! It is really easy for every user. Thankfully, this wonderful Blu-ray recorder for mac owns plenty of great features designed to make the converting process easy and give you files that are playable on any device you choose, whenever you choose to watch them.

In a word, each one’s preferences on quality and method of Blu-ray recording software are different, so you may prefer some advanced options we do not cover here. It does not matter. All we hope is to get a fairly simple, hassle-free guide for people to get the job done. Just choose the proper Blu-ray recorder for mac based on your requirements!